Objective of the experience:

Main objective of the innovative experience:

In this project “2017 Participatory Budgeting for Migrant Workers in Taoyuan(MWPB),” our target group consisted of South-East-Asian migrant workers who were living and working here without citizenship and were both disadvantaged and being discriminated against in Taiwan. We tried to create spaces for the provision of equal participation opportunities for Migrant Workers (MWs) and diverse inclusion in Taiwanese society.

*complementary information: Photos, Videos, DM and Posters of the project.

For the participation of this marginalised community (migrant workers), there are three core principles: Public-Private-Partnership (the PPP model), the active involvement of public servants, and participant-centric design. The implication and operation of these principles were explored in the following parts.

In terms of participants, migrant workers from all relevant countries participated in this project (see the table below), besides the MWs, other citizens also joined in with these activities, including public servants, immigrant residents and local Taiwanese. All of the participants cooperated with each, not only with regard to MW leisure activities but also in terms of mutual understanding. Furthermore most also indicated that they were satisfied (very satisfied 51%, satisfied 42%, average 7%, dissatisfied or very dissatisfied 0%).

In terms of proposals, each proposal was accommodated to the cultural context of the proposer’s mother country, without being forcefully amended. Moreover, the integral proposals brought together the needs of migrant workers from different countries.

In short, according to both subjective and objective criteria, the MWPB achieved the goal to promote equal participation and diversified inclusion.

Migrant workers (MWs) are a marginal group in Taiwan politics and suffer from cultural discrimination and stereotyping. They are poorly educated unskilled workers. Given these restrictions, and unlike in other participatory budget projects that have attempted to integrate them into local communities, the present project aimed to create an alternative. By carrying out our participatory budget project, we wanted to establish a friendly environment in which migrant workers could freely express their needs, in their mother tongues and by joining in with leisure activities. In other words, the innovation of this project was firstly to make non-citizen migrant workers feel as if they were being treated equally and inclusively and then to familiarise citizens, particularly the political and social elites, with the migrant workers. It is thought that the core concept of this project could apply to all socially disadvantaged groups and immigrant communities.

2. Usage of mother tongues: Using the mother tongues of the participants is the precondition for reducing barriers in deliberation and ensuring a friendly environment.

3. Face-to-face communication between public servants and participants: This is a way to break down the power relationship between the regulators and the regulated. Public servants can better understand the target group that they have to serve, while those making the proposals can discover the limits of public policies in the proposal stage and, in doing so, will be less disappointed should their proposals be either rejected or not fully realized.

4. Multi-linguistic webpage on Facebook: The proposers can present and clarify their proposals in a clearer way by videoing the proposals in their mother tongues. More participants can understand different proposals when the proposals are translated into more than one language.

According to the experiences of this project, the above-mentioned elements could be widely replicated in various transcultural participatory budget projects at a reasonable cost. 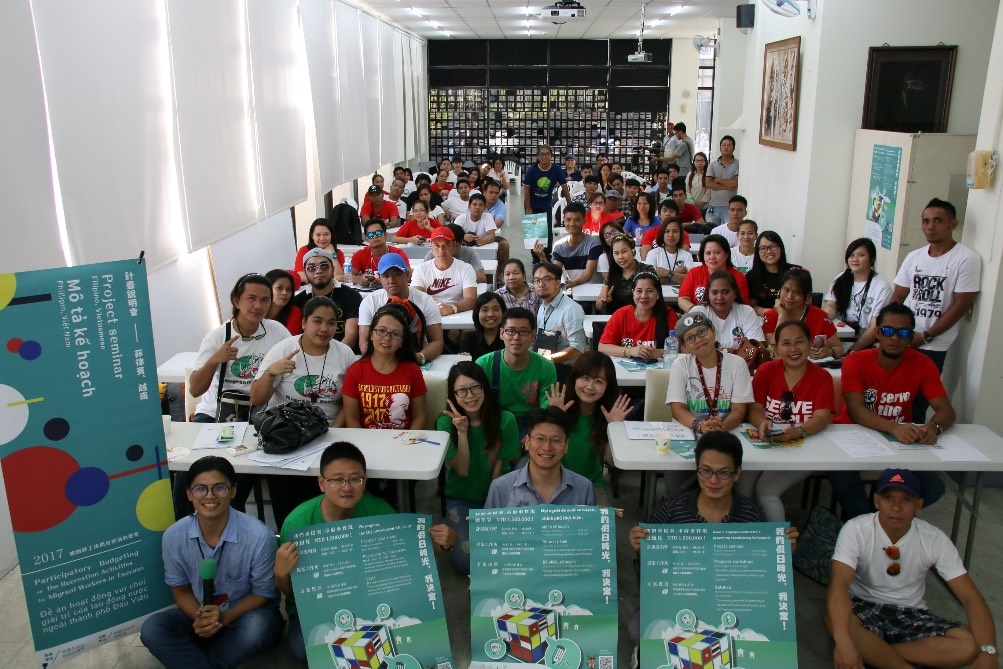 This project is designed for the marginalised migrant workers, and therefore takes certain socio-political, economic, organisational, and technical factors into account.

1. Socio-political: We chose leisure activity as the first step to empower unorganized migrant workers and include them in a government-funded participatory budget project because it is an issue of reduced political sensitivity and a lower participatory threshold.

2. Economic: Suspicion with regard to the decision-making and budgeting power of congresspersons or councillors can be reduced. The parliament or city councils in Taiwan tend to downgrade participatory budget projects and it was even more difficult to persuade them to go ahead with this one, as it concerns non-citizen migrant workers who have no right to vote. We endeavoured to establish some spaces for freedom and flexibility, although the Department of labour only budgeted fifteen thousand Euros, in order to reduce the misgivings of the councillors.

4. Technical: We used operable tools and accessible approaches to extend the diffusion of information and MW-participation. For instance, not only physical voting booths (both regular and mobile), but also digital voting website for all voters. Additionally, all proposals were recorded by the proposers and shown on the FB website.

Through these measures, based on different factors, the PB for MWs could be implemented effectively, as well as for other disadvantaged groups. 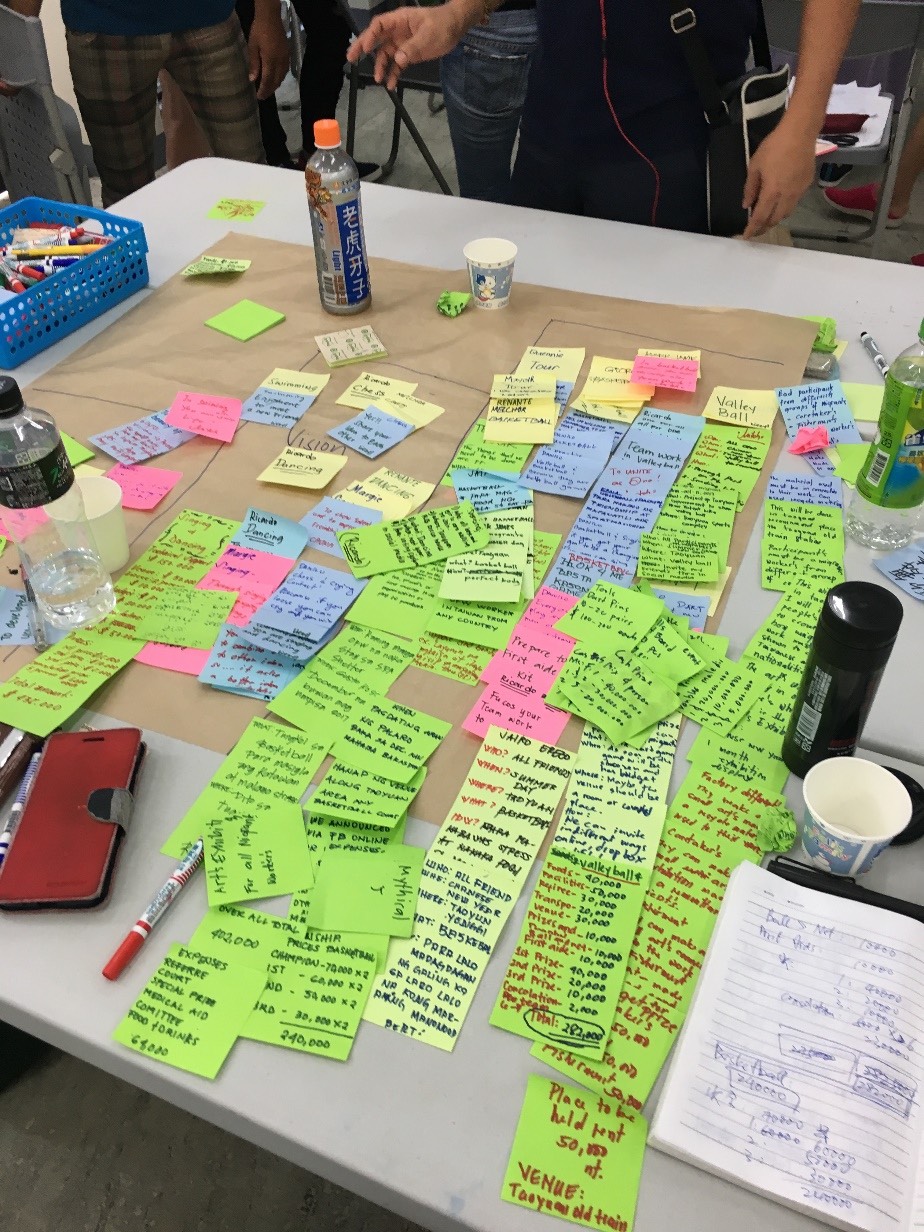 1. Relevant NGOs: The relevant NGOs participated in the entire process for the project, including the mechanism design stage; the workshop for facilitators; the proposal, discussion and voting stage; as well as the execution of the proposals.

2. MW proposers: After the proposals had been accepted, the public sector invited the proposers to participate in the implementation process, in order to ensure that their ideas and preferences would be properly realized.

The MWPB was designed to achieve the goals of multiculturalism and equal participation for the disadvantaged. To achieve these goals, five different types of actors in the project were expectantly charged with their respective responsibilities:

The main officials for the project had to actively facilitate the project and respond to the questions presented by political appointees, as well as challenges from other politicians, in order to ensure the due progress of the project and to free it from unwarranted political interventions.

Public servants had to understand the needs of migrant workers through on-the-spot participation, drawing up policies in accordance with the principles of governmental budgets, and making sure the selected proposals by migrant works would be properly carried out.

Facilitators were responsible for providing technical assistance, leading the discussions and designing the mechanisms of discussion, on the basis of different linguistic and cultural contexts, and mediating between the government and the communities of migrant workers, who may have had disagreements on some topics. 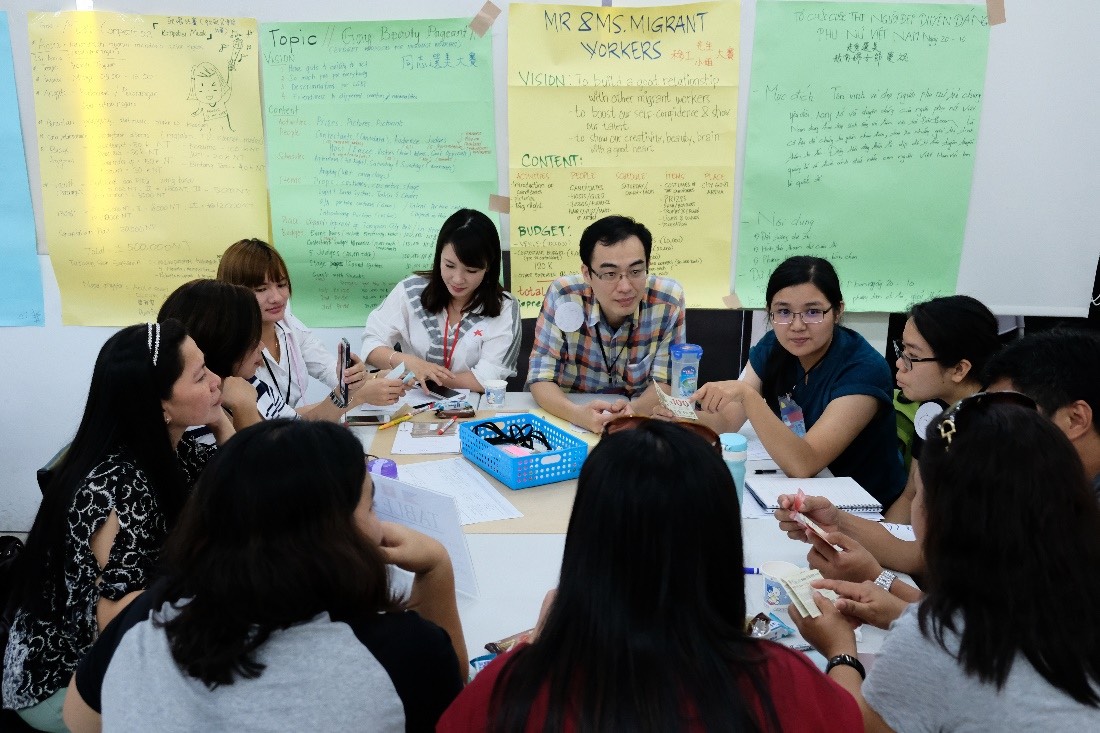 Advisory groups, mainly the SPA who, in the mechanisms design stage, were asked to contribute the opinions of migrant workers. In the participation and voting stage the SPA, together with other groups, played an important role in mobilizing the migrant workers.

Participants, mainly Taiwanese citizens and migrant workers from other countries, both of whom participated in the proposals and voting. They had to transmit information and mobilise votes for the proposals in which they had an interest. As a result of such participation, they ceased to be bystanders and became actors who had to express their opinions, turn their ideas into practical policies, implement those policies, along with the public sector, and by doing so understand the conditions and limits of the public sector.

The operation can be evaluated using both qualitative and quantitative methods:

In the quantitative dimension, this project used the participation and voting population, as well as a survey questionnaire to analyse participatory effectiveness.

In the qualitative dimension, on the one hand, all of the people were able to express their opinions on the FB official website for the project, or through their relevant organisations. On the other hand, those public servants that directly took part in the activities were able to contribute to the arguments from the working fields.

Furthermore, the advisory groups and the representatives of the MWs took part in the executive board for the new project and brought their feedback from 2017 to the project ”Taoyuan City Migrant Worker Friendly Measures” in 2018