'Our Money, Our Say!' - Budgeting by Inclusion

To achieve greater levels of equality in terms of participation and to integrate diversity as a criterion for inclusion.

The objective was achieved through the pilot project called 'DUIT KITA, HAK KITA!' (Our Money, Our Say!). This project is a smart-partnership between PWDC with the State Assemblyman of Machang Bubuk, Members of Parliament of Bukit Mertajam, Municipal Councils of Seberang Perai including the 17 members of the council of citizen in the constituency (MPKK).

Both of the state assemblyman and the member of parliament give RM50,000 as a grant for the project. The 17 MPKK were to compete to win the RM100,000 by proposing a project from the community engagement using the GRPB approach/process in their own neighbourhood.

A working group was set-up as the accountability mechanism to make sure the 17 MPKK comply to the process in the public consultation.

Achieving higher levels of equality in participation and diversity for greater inclusion lies in implementation of GRPB at community level by the MBKK members. The community engagement involves 4 steps and they are:

Step 1 –survey on demography background and issues in community

Step 2 – focus group discussion (according to sex and age group, including abilities and ethnicity);

In the focus group discussion, the community were encouraged to express their issues and also proposed the solution on how to overcome them;

Step 3 – voting for the priorities of community needs; and

Step 4 – planning and implementation and evaluation

The 17 MBKK members groups were expected to implement all the steps to their own neighbourhood. The process will be monitored by the working group. A series of capacity building were organised before every steps implemented, example: on how to do survey, focus groups discussion facilitation and taking notes.

This model approach is to be proposed as the mechanism on getting the community to participate in the budget making of the local and State government. The findings of these community engagement will be presented at the local government budget dialogue and/or send to the respective State departments/agencies for annual budget planning.

The model has potential to be replicated and implemented in the different context of urban or rural area. The step can be shortened, therefore, can pick and chose the most suitable method to use in community engagement and data collection. For example: can either choose Step 1:survey or Step 2: focus group discussion to get community inputs about their needs, then, followed by voting of needs.

Capacity building is important in training the community on the methods of data collection.

The success of this project relies on the smart-partnership of different key players at different levels: State, local government, community and NGOs. PWDC as an ngo that provides content matters expertise; state and local government commit to the project through money allocation, and community leaders as implementers and to mobilise the community.

As mentioned earlier, the project was coordinated and monitored by the working group that consists of different key players at every levels.

The Minister of Education, given that the children, both boys and girls, that depend on these professional female sex workers have been able to receive some elementary education (at 3 years old instead of 6), as per the regulations and programs imposed by the national authorities.

The Ministries of Foreign Affairs, Vocational Reintegration and Employment, given that these women, having received some kind of training, not only have to receive training certificates, they also have to be assisted by social reintegration teams so that they can seek work and produce goods and services.

At the start, in the middle and at the end of the project, the local civil society and local leaders took part in starting up the experience through exchange meetings. From that point on, they were invited to become consumers of the goods and services provided by these women and young people, promoted by the training and work centres of the NGO A.P.E.F.

This already explained in the column above.

The key people in this project were the two political leaders: the state assemblyman and member of parliament of the constituency and Municipal Council of Seberang Perai (MPSP). This concept of participatory budgeting is new in Malaysia, and Penang is the first state that implemented it through a programme calls GRPB that was initiated by PWDC.

The two political leaders including members of MPKK groups work hard to promoted the program to community by going to the coffee shops, morning markets, night market etc. During each steps: survey, focus group discussion and voting – banners and flyers were given to the MBKK members to distribute to their neighbourhoods.

A dialog session was held after the step 3 to all the 17 MPKK groups to get their feedback on the process and identified challenges. Among others, the suggestions are: community need more capacity building on the methods skills especially to the implementer of the steps; the process can be simplified and less complicated by skipping the unnecessary step. For example, can choose between Step 1 and 2. To come up with list of funders so that the projects that didn't get the highest votes still can be implemented at their neighbourhood.

The whole steps and process follows the 'dialogical action' whereby for each plan of action will be followed by the reflections dialogue at the working committee. 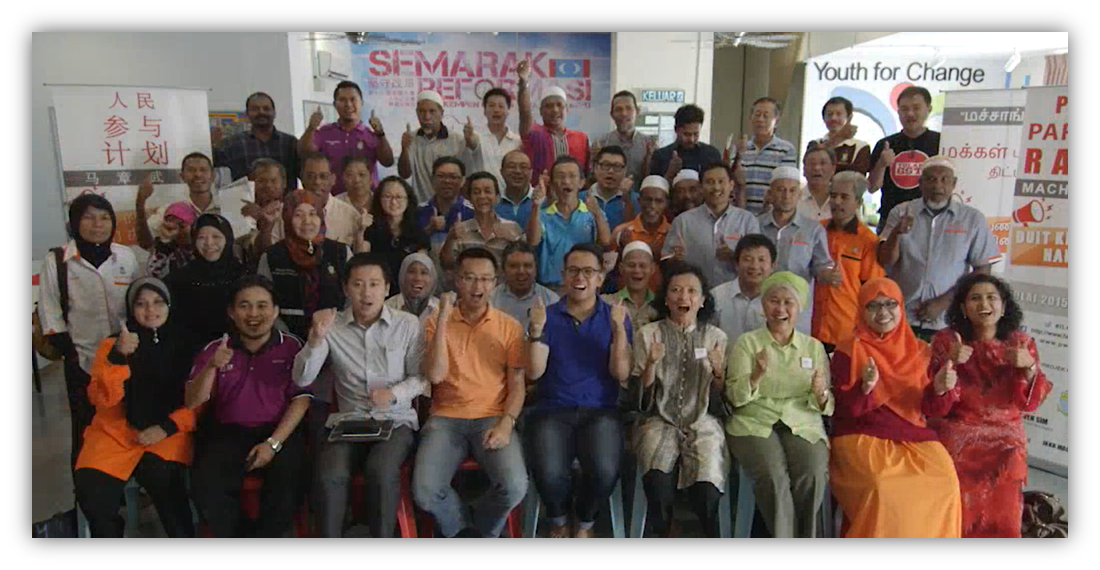 "A very interesting ongoing institutionalization process and scaling up of a PB process that targeted specifically women and minority inclusion."