On April 20 2021, the IOPD hosted a seminar on the contributions of participatory budgeting to climate change adaptation and mitigation.

The International Observatory on Participatory Democracy is organizing a webinars series following the publication of the study "Contributions of participatory budgets to climate change mitigation and adaptation", coordinated by Yves Cabannes (UCL/DPU) and co-edited by several partners. A first session in French was held on February 23 and another in Spanish last March 23, other sessions will be held later. These webinars are organized in partnership with UCLG, IOPD Africa, FMDV and Kota Kita.

This seminar began with a global introduction to the challenges of climate change and the role of local governments to face it, followed by a presentation of the main results of the study, five case studies and finally a discussion and exchange with all participants. Throughout the session, participants were invited to comment on the presentations and make contributions through the Zoom's chat, as well as through a "mural". The objective of these seminars is to discover to what extent participatory budgeting is an opportunity to address environmental and climate challenges for local governments, and which are the best ways to implement it.

You can read the report of the seminar here 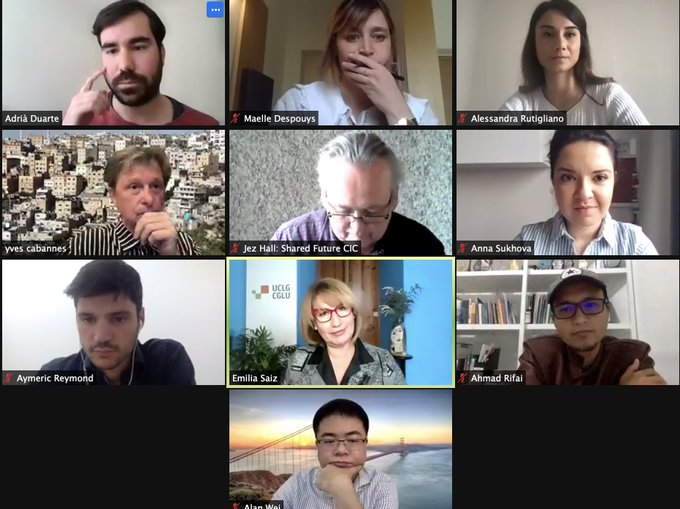 Emilia Saiz, Secretary General of UCLG, opened the event underlining the importance of the discussion on ecological transformation. She emphasized the need to focus attention to the fact that climate change is often an under-reported crisis, even if it is definitively changing our lives. She highlighted the importance to achieve a new social contract in the actual context, that can be very well articulated around the SDGs of the Agenda 2030. So participatory budgeting, direct democracy and community solutions can be and will be critical for this pact for the future for the people, for the planet and for the government.

Yves Cabannes Emeritus Professor of Development Planning at University College London introduced the main results of the study that he carried about local and regional practices on climate-sensitive participatory budgets. The study shows that we can find climate-sensitive participatory budgeting in all types of cities, of different sizes and regions of the world. Most of those experiences arised from addressing the consequences of the climate crisis on the ground, rather than from international programmes.

Regarding the responses offered by participatory budgets, Yves Cabannes pointed out that they are very varied, adapted to the immediate need (not big projects for the future) and very creative. Another aspect highlighted by Yves Cabannes is the multitude of innovations that emerge from these processes and which are very poorly documented. The author of the study defended as an agenda for the future the need to scale up and maximise the impact of climate-sensitive PBs.

Aymeric Reymond, Senior Consultant at South Pole spoke about experiences supported by the Program Climate KIC at the European Union, and shared his reactions on the study of Participatory budgeting and Climate change at the european level. He introduced the city finance Lab, an European platform created to support the development of innovative financing solutions focused on sustainable cities founded by the Program Climate KIC.

After these cross-cutting interventions, five specific cases were discussed. Bordeaux, Semarang, New Taipei City, Arzgir and finally an overview of the participatory budgeting landscape and the Citizens' Climate Assembly in Scotland.

On behalf of the city of Bordeaux (France), Maëlle Despouys, Head of the City Council's Public Consultation Unit, explained how the climate-sensitive participatory budget works. It has been an opportunity to raise awareness of the effects of climate change and to co-create urban solutions.

Alan C. Wei Senior Policy Advisor of the New Taipei City Government in Taiwan, presented and shared a participatory budgeting experience for energy saving projects that they implemented a couple of years ago at the district level.

Anna Sukhova, Specialist of Social Protection and Community Development of the World Bank of Russia presented the case of Arzgir in Stavropol Republic / Krai. This region of southwestern Russia has been affected in recent years by large fires. In this regard, he highlighted various projects arising from the participatory budget aimed at anticipating and providing resources for rapid extinguishing of future fires.

Finally, there were three speakers who presented an overview of participatory budgeting in Scotland and its relation to the climate emergency.

Jez Hall, Co-director of Shared Future: a Community Interest Company provided an overview of participatory budgeting in Scotland and its relation with the Climate Action. He presented a little Journey on how Participatory Budgeting started to be adopted and he announced some of the next steps of those projects.

Oliver Escobar from Edinburgh Futures Institute of the University of Edinburgh followed the presentation of the Scotland participatory budgeting panorama and made an introduction of the Scotland's Climate Assembly. He mentioned that climate action requires as well as acting in a decentralised way, the devolution of power for local and regional action and short term action based on long term thinking.

At the end of the case presentations, some specific questions were asked to the speakers. Regarding the evaluation of proposals, about experiences that go beyond mitigation or about the role of citizenship beyond proposing ideas. Throughout the session, participants were also able to contribute to the mural platform. Participants had the possibility to share ideas, experiences and questions about the role of local government in this ecological transition and attention mitigation to the effects.

Adrià Duarte, coordinator of the IOPD, concluded the event by defending decentralised cooperation and the role of participatory and deliberative practices to face the climate crisis and the necessary ecological transition.