Bogota Leader is one of the emblem strategies of the Administration of the Colombian capital, coordinated by the Institute of Participation and Communal Action-IDPAC. This program seeks to strengthen the projects and significant initiatives of the social youth organizations of the Capital District, orientated when is employed at benefit of the communities, across a training process, exchange of experiences and of support by financial contribution to the positive transformation of social realities, to the strengthening of organizations of the civil society, to establish networks among organizations and the consolidation of the conviviality and the diversity as axes of peace and community life.

The program seeks to strengthen the projects and significant initiatives of the youth social organizations of the Capital District, oriented to work for the benefit of the communities.

In the first call (2016) 107 applications were received from the same number of youth social organizations, of which 63 were selected to advance the training process; of this last, 58 leaders were certified by the IDPAC and the OEI (Organization of Ibero-American States) after attending at least 80% of the training days.

Finally, 55 organizations benefited from one of the two incentives of Bogotá Leader (30 received incentives in kind and 25 experiences exchange in Ibero-America)

In Bogotá D.C., there are discriminatory boundaries and wrong ideology that difficult the effective enjoyment of rights  and they constitute obstacles to guarantee the full development of the capacities of citizens, for example, according to the Biennial Culture Survey of 2015, about 50.7% of the young population consider that homosexual people should not being allowed to teach at schools; 43.3% think that poor people are more likely to commit more crimes than rich people; and 26% consider that people of African descent will always have limitations due to their skin color.

In addition, the most recent characterization of the youth organization processes and practices of the city, carried out by the IDPAC, showed that 58% of them work with their own resources and from volunteering; that only 8% have a budgetary component and that only 14% disseminate their actions, which makes it difficult to have a greater impact of the initiatives to make them sustainable.

Therefore, in theory the youth movements and processes are recognized as spaces for horizontal socialization among peers, in practice they become small spaces of exchange between people who share affinities, reinforcing the social isolation of the population between 14 and 28 years of age. This is how 47% of the processes and youth organization practices are made up of only between 6 and 20 people, directly affecting the low level of citizen participation of young people in the city.

Bogota Leader improves strengthen in projects or initiatives from youth organizations in their communities, selecting those that at least has been functioning a year. In order to enhance the ones that are transforming the reality of their neighborhood to make them sustainable y viable in time. 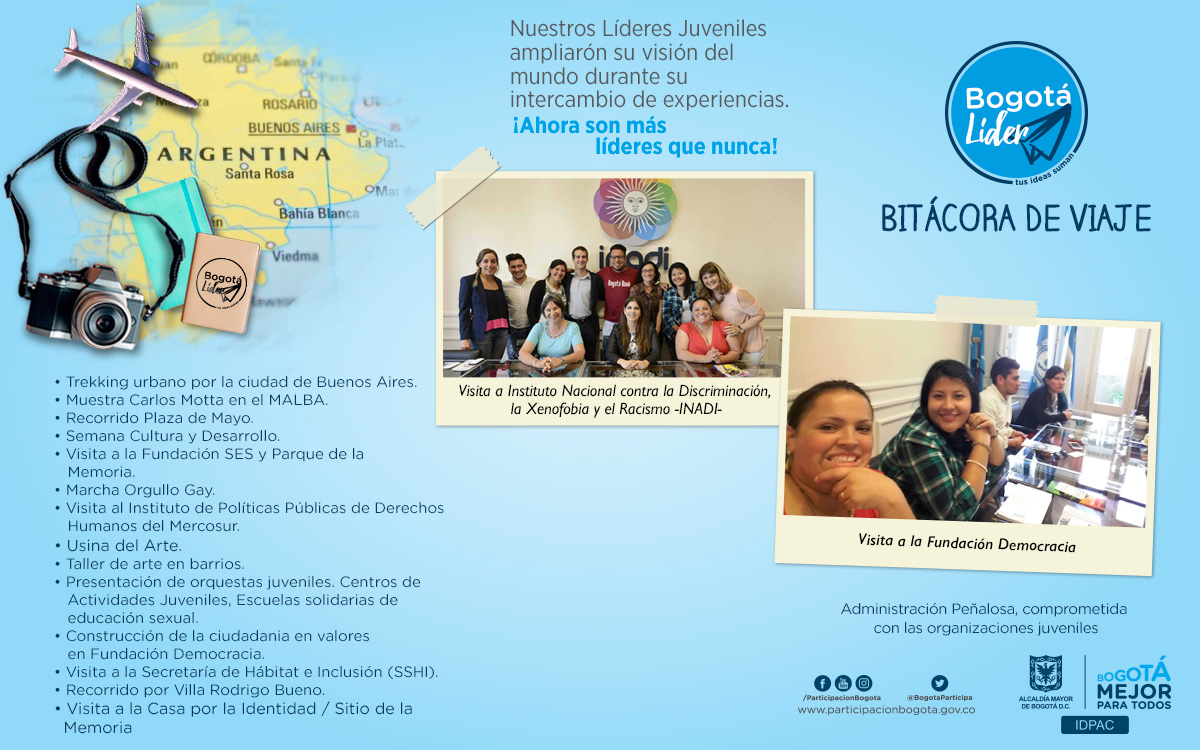 The main point of Bogotá Leader is the strengthening of youth organizations, through a process of leadership training, exchange of experiences in Ibero-American cities and delivery of in-kind incentives that enable the potential of the projects or initiatives to be strengthened, so that they do not depend in the future on state aid for their development. Therefore, the announcement had 8 categories:

-      Diversities and fight against discrimination

-      Entrepreneurship for the collective construction of social and community projects

In order to carry out a transparent process, the IDPAC signed an inter-administrative agreement with the Organization of Ibero-American States-OEI, an entity created in 1949 to promote science, education and culture in the countries of Ibero-America. This alliance allowed for a qualified and independent systematization of the applications of the call, a review of the criteria for qualification and correction, as well as development of the training process. Additionally, the existence of offices in each of the capital cities of the members guarantee to the winners of the exchange of experiences, while facilitating the construction of a thematic agenda according to each of the winning projects.

Once the call was closed, each of the 107 applications received was systematically evaluated, in order to determine which accomplish the criteria that enabled them to participate; this was: being legally constituted as youth organizations; be composed with at least 70% by members between 18 and 28 years old; and have at the time of registration a project or transformative initiative with a minimum of one year of development in the city.

As soon as the qualified organizations were determined to continue in the process, the training phase began with the leaders selected by each organization to represent them in Bogota Leader. Therefore, the training proposal lasted 40 hours in site and was developed around leadership tools, networking, project formulation and peace building. 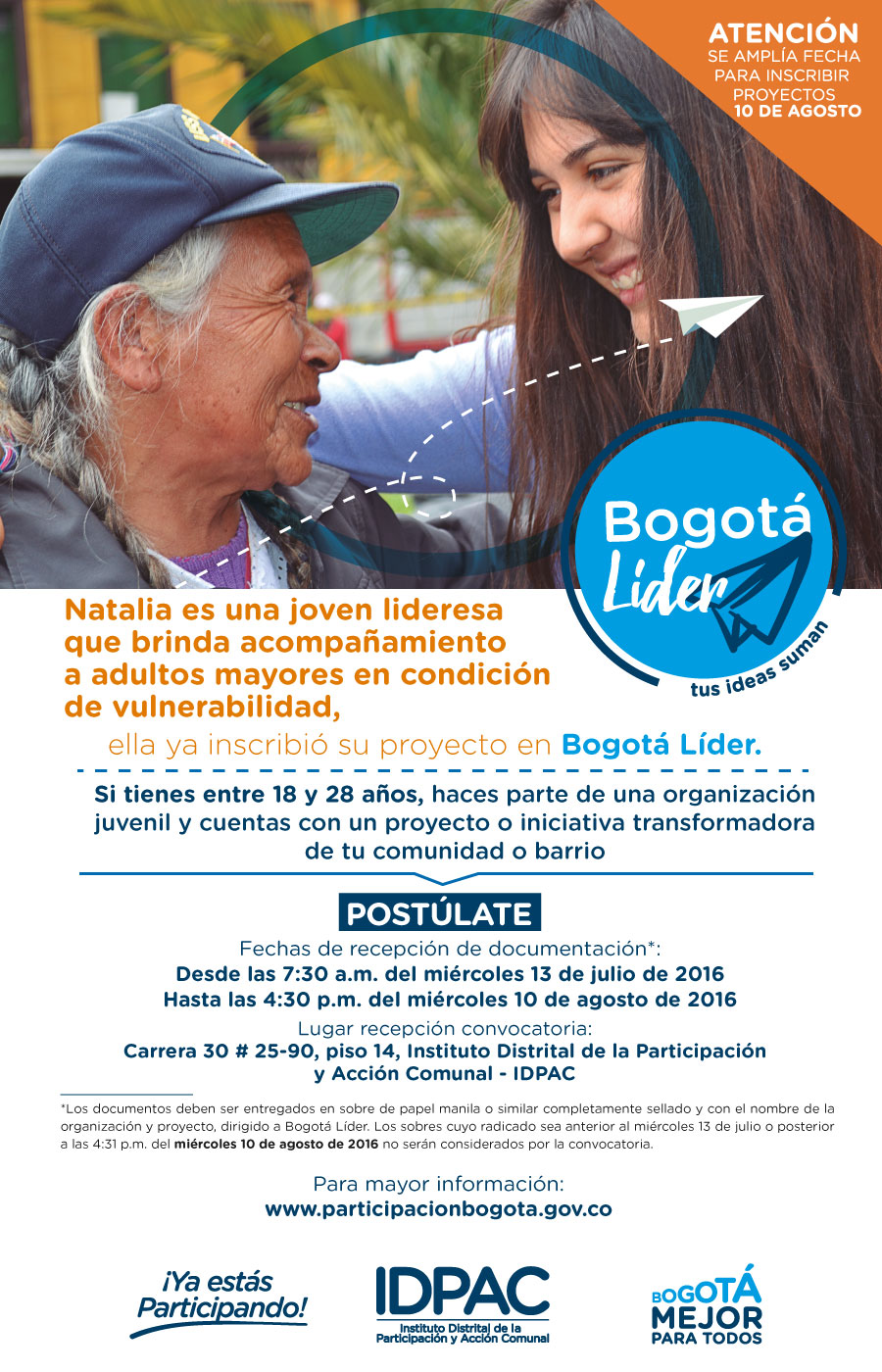 Among the 55 best initiatives or projects, 18 won the exchange process in Buenos Aires, Lima, Mexico City, Quito and Madrid between November 25 and December 4, 2016 with agendas created by the OEI and the IDPAC. In addition, 30 youth organizations received tools of furniture, computers, cameras, bicycles and other elements requested by them to strengthen their projects or initiatives and ensure their sustainability. It should be noted that each of the winners of experience exchange should develop a knowledge transfer strategy within their organization, focused on transmitting the learning acquired during their stay abroad.

The total value of the project was USD 360,454, corresponding to 7.01% of the IDPAC budget. Of the total budget, the IDPAC made contributions worth USD 208,787 and the OEI USD $ 151,667 in counterparts derived from technical advice, construction and development of agendas for the exchange of experiences, support for training processes and development of transfers of funds.

Description of the information disseminated during the process

Dissemination and call: Audiovisual and printed pieces with the Terms of Reference, conditions of the contest, incentives and general information.

Preliminary results of the call: Dissemination on the IDPAC website of organizations with documents that can be rectified and directly enabled to participate.

Results correction: Dissemination on the IDPAC website of the organizations qualified to participate after completing the correction process and two informative videos with the results of the call.

Training process: Each of the participants was given all the pedagogical materials of the training sessions.

Delivery of incentives and results: For each of the exchanges of experiences, the OEI made audiovisual pieces to systematize the agendas of the young winners. Likewise, the IDPAC selected some innovative projects so that their initiatives were disseminated and recognized in the city.

Transparency in the process

In order to guarantee transparency in the process, each of the results were duly published on the IDPAC website and the OEI (www.participacionbogota.gov.co and www.oei.org.co). Therefore, the return of the information was made to all the participants, stating the organization and project, together with the result obtained, during the phases of the training process. On the other hand, some of the organizations that have won the exchange of experiences have developed videos, events and workshops in their communities, in order to transfer the knowledge acquired throughout the exchange process. In addition, during the closing event held on December 20, 2016, the work of all the participating organizations was praised, through the delivery of the "Project Leader 2016" award.

Despite being a pilot, Bogota Leader managed to start to break down the welfare paradigm in the youth organizations of the Colombian capital, promoting its projects and initiatives towards self-management and self-sustainability. Thanks to this, it broke with the prevailing idea in the past that focused on the receipt of incentives without minimum requirements within the organizations aimed at the effective transformation of the realities of the community.

Bogota Leader was the first public initiative that aimed at the exchange of experiences and knowledge as an effective way to strengthen social organizations and the delivery of incentives from a perspective of sustainability and viability and not as a welfare tool. In this sense, during 2017 all the local city halls of the city will have the possibility of having the Bogota Leader model in their localities with the technical advice of the IDPAC. Under this vision, we seek to transcend territorially and join efforts to strengthen all social organizations in the city from a much broader, decentralized platform with greater impact. 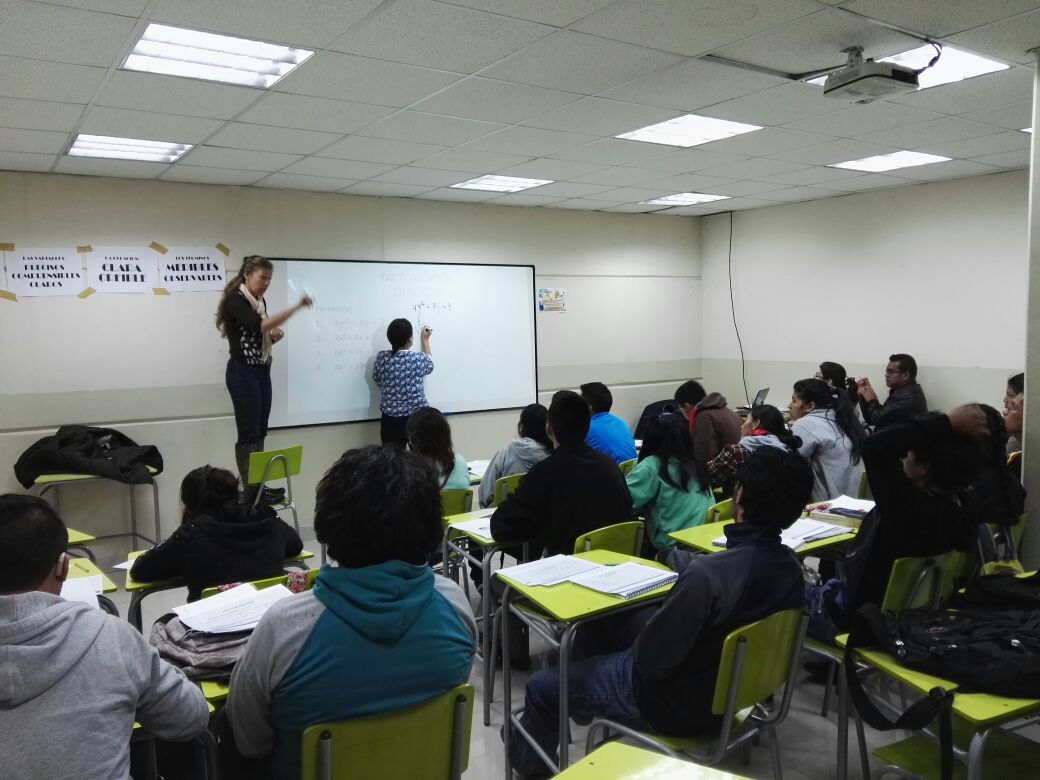 Because of the nature of networking and knowledge transfer on which Bogota Leader is based, the model is absolutely replicable and transferable in other cities around the world. In fact, the International Relations Office of Mexico City has shown interest in carrying out a similar project in that city and strengthening the exchange agendas within the framework of Bogotá Líder, between Mexico and Colombia.

Bogota Leader managed to make visible more than 55 social organizations in the city and with it the work of more than 300 young people who work from the environmental, animal, recreation, sports, art, peace, culture and the inclusion of people with disabilities, the LGBTI community and women rights. During 2016 we managed to strengthen projects such as: Teaching english for people with disabilities, environmental schools in the hills of the city, recycling, training schools for women head of family, training schools in youth soccer in the town of Ciudad Bolívar (one of the most violent in Bogota), among many other projects.

Likewise, about 15 of the 25 young beneficiaries with exchange of experiences not only managed to strengthen their initiatives through learning and recognition of the work of other organizations, but also transformed their lives from the moment they were at the airport, many of them had never had the chance to get on a plane. This fact undoubtedly opened their minds and changed their perspectives in relation to their environment and their relationship with the world, initiating a work thought in a network with other similar organizations in the continent.