The assembly met over six weekends in Spring 2020 in order to emit recommendations towards the goal of becoming net carbon zero by 2050.

The Climate Assembly UK is aimed at fostering a discussion on what and how the country should do to in order to achieve the goal of being net carbon zero by 2050. The outcomes will be considered as recommendations, which will be delivered to Parliament to help facilitate the scrutiny work of the six commissioning House of Commons Select Committees.

The United Kingdom's Climate Assembly is made up of 110 members randomly selected in order to be representative of the UK population.

From 6 November 2019, 30,000 letters were sent to people as an invitation to to take part in Climate Assembly UK. To ensure the most representative sample, 80% of those receiving an invitation were randomly selected from every UK household address. The remaining 20% were randomly selected from the most deprived areas, since response rates are estimated to be lower from these postcodes. People receiving an invitation could respond by phone or online, creating a pool of potential participants free on the relevant dates.

A random stratified sampling (undertaken by a computer) was then used so as to select the 110 participants who together are representative of the UK population aged 16 years and over in terms of age, gender, educational qualification, ethnicity, where in the UK they live, whether they live in an urban or rural area, attitudes to climate change. The computer also ensured that a maximum of one person from any single household was selected to participate.

Permanent UK residents (anyone that has stayed or intends to stay in the UK for a period of 12 months or more at the date on the invitation letter) are allowed to participate.

The following people could not apply: members and staff of either Houses of UK Parliament, National Assembly for Wales, Scottish Parliament, or Northern Ireland Assembly; Local Authority Councillors and elected mayors; and paid employees of any political party or of UK Parliament.

Out of the 110 people, 105 assembly members were selected to match the UK population as closely as possible. The remaining five spaces were used to over-sample groups that are either very small (meaning that an assembly member being ill for a weekend, for example, would leave them poorly represented) or which are more likely to drop out of the assembly process.

The tables below show the distribution of the 110 members compared to UK population: 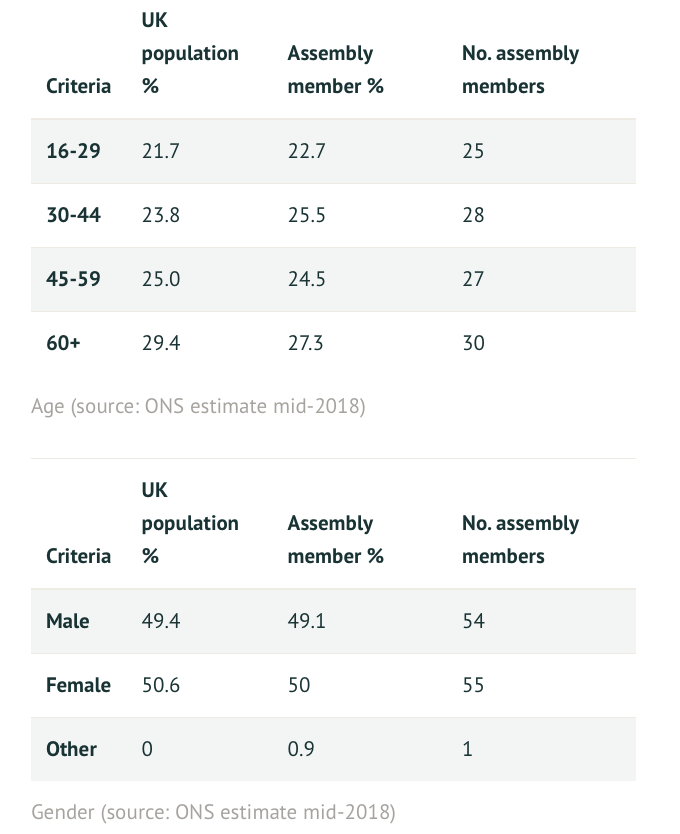 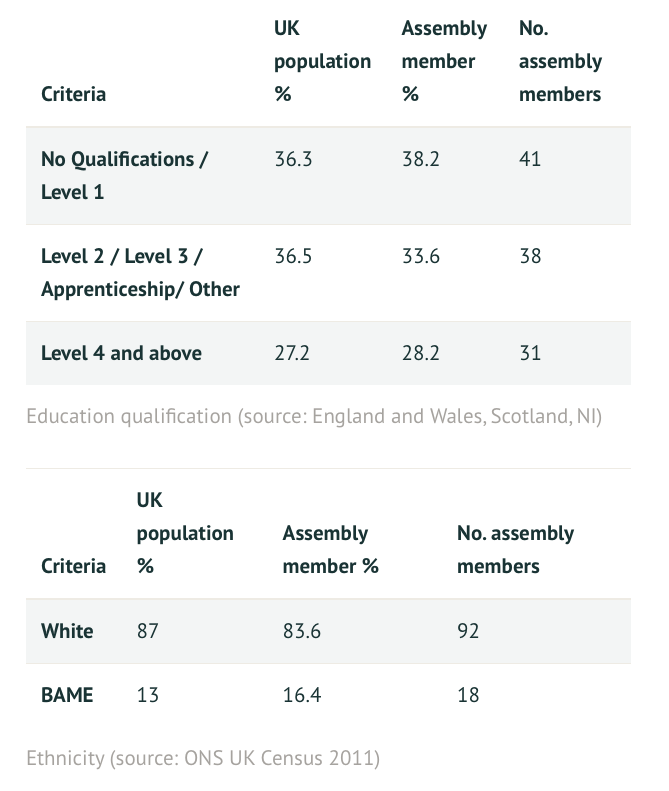 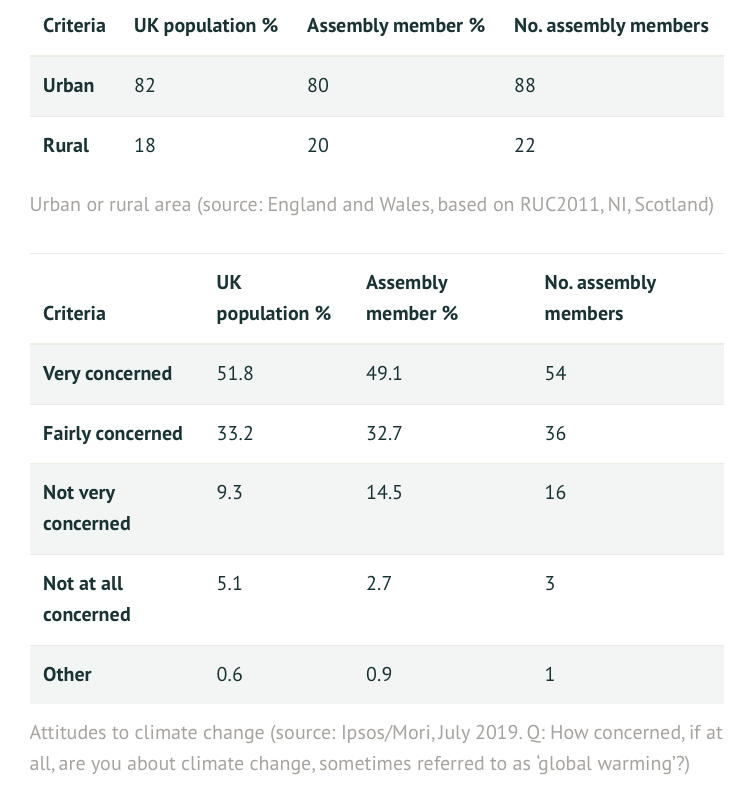 You can check here the basic information document which was sent to the participants prior to participating in the assembly.

In June 2019, the UK Government and Parliament agreed that the country's action was not sufficient to tackle climate change, and passed a law committing the UK to reaching 'net-zero' greenhouse gas emissions by 2050. In this context, six Select Committees of the House of Commons called a citizens' assembly In June 2019, in order to understand public preferences on how the UK should tackle climate change. The six committees are Business Energy and Industrial Strategy; Environmental Audit; Housing, Communities and Local Government, Science and Technology; Transport; and Treasury.

The Climate Assembly UK is funded by the House of Commons, with additional funding from two philanthropic organisations: the Esmée Fairbairn Foundation and the European Climate Foundation.

Besides being composed of the UK residents as described above, the process involves a series of actors such as so-called Expert Leads, Academic Panel and Advisory Panel. Expert leads (specialists in different approaches) take care of the information which is provided to the Assembly is balanced and keeps the focus on the key issues to face the net zero challenge; the Academic Panel reviews the written briefings created for assembly members to support the Expert Leads in ensuring they are balanced, accurate and comprehensive; the Advisory Panel (whose members were chosen to represent stakeholders with an interest or expertise in the areas of emissions reduction that Climate Assembly UK will examine) provides feedback on key aspects of the assembly's design, such as who is invited to speak, what they are asked to cover, and the questions on which assembly members are asked to give their views. You can refer to the official site in order to find more information about about these positions.

The assembly took place on 6 weekends: 24-26 January; 7-9 February; 28-1 March/April; 18-19 April; 2-3 May; and 16-17 May. Note that the first three were held in Birmingham, as planned, while the last three were held online due to the COVID-19 pandemic. Each weekend, members of Climate Assembly UK heared from a range of speakers including academics and stakeholders.

To choose the speakers, the Expert Leads began by identifying the key questions on how to get to net zero for each topic the assembly addresses, and a preliminary structure for each topic panel was created. In addition, a set of suggested speakers were selected based on the advice of members of the Academic Panel.

Each speaker had 5-10 minutes to present on a topic that's relevant to the conclusions and recommendations the assembly will reach. Some speakers were asked to be informants (explaining the range of views or options that exist), while were some are advocates (presenting their personal opinion or that of the organisation they work for).

You may find here all the information and material for each weekend, including slides used by speakers and briefing material provided to the citizens. Some sessions of every weekend were livestreamed, and its recordings can also be find in the link above. Nota that some sessions remain private.

While the final report on the outcomes of the Assembly is due in September 2020, an interim briefing on Covid-19, recovery and the path to net zero has been published. It offers a unique insight into how 100+ members of the public, feel about the implications of the coronavirus pandemic and the resulting lockdown for reaching net zero.