The draft project was launched in late 2019 and will be taken to parliament and proposed for adoption by October.

The Co-operative and Policy Alternative Centre (COPAC), together with the South African and Food Sovereignty Campaign (SAFSC), and other civil society organisations have engaged in a process to develop a Climate Justice Charter for South Africa.

The process of developing the charter has been essentially participatory. It is rooted in five years of campaigning for food sovereignty and climate justice, and stems from previous processes which crystalized the contents of the draft charter: the Water and climate conference 2018; Roundtable discussions in 2019 by COPAC on drought-affected communities, the media, faith-based organisations, Labour, Youth and Environmental and Social Justice Organisations. Besides, there has also been a call for public engagement through social media and e-mails and think pieces commissioning on topics raised at the roundtables for public discussion and further insights and lessons to guide the charter development.

Building on the previous participatory processes and the feedback gathered, the draft of the charter was launched at the end of 2019, open for discussion, comment, finalization and endorsement by organisations and individuals. All organisations participating in this process took the draft charter back for further engagement and endorsement in their constituencies. For the first few months of 2020 the charter travelled throughout the country, getting more input and evolving to the needs of the communities. Climate Justice activists and supporting organisations convened assemblies in workplaces, communities, faith-based spaces and more in order to deepen input from the grassroots. The draft Charter has also been an open Google Document for public comment since November, and organisers also received public comments and inputs that way. 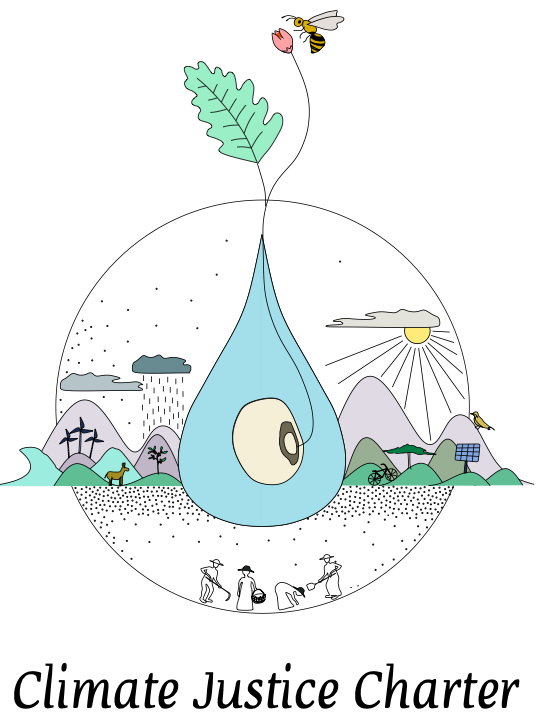 Ahead of preparing the final version, the organizers have called for organisations and individuals to endorse the charter during 2020. The final version of the Climate Justice Charter was planned be issued at the end of June 2020, but it has not yet been published. Indeed, the COVID-19 pandemic and lockdown has modified the schedule and has complicated the plans of doing more societal engagements. The last public event the group had scheduled before finalising the charter, a People's Assembly held on 16 June 2020 to coincide with the 44th anniversary of the Soweto Uprising, was done as an online event instead.

Once the final version is made public, the process will reach the next stage, which is to generate individual and organisational endorsements and translation into all South African languages. A short comic version for kids, audio-visual clips of activists reading it out and other popular forms of public education and promotion in different languages are also being prepared. It will be finally taken to the South African parliament by 16 October to demand that it be adopted in accordance with Section 234 of the South African Constitution, which provides for charters to be adopted when such initiatives from the public demand it.

The Climate Justice Charter movement will also put together an economic model for the Charter, a Climate Justice Deep Just Transition Plan, which will propose detailed policies, and specific economic measures for socio-ecological restructuring, to identify concrete steps to realise systemic alternatives. A Just Transition tool, based on the Charter, will also be developed for bottom-up engagements in workplaces and communities. This process will enable various constituents to develop their own plans for deep just transitions.