Grenoble-Alpes Métropole opened a citizen participation consultation prior to the launch of the new 2020-2030 Climate Air Energy Plan. After more than a year of a participatory process, the updated plan was presented last February.

The objectives of the "Plan Air Énergie Climat" are the following:

The Climate Air Energy Plan is a key tool of the metropolitan government for reducing greenhouse gas emissions and adapting to climate change. It sets out the guidelines defined at national and international level to establish objectives for the territory, defining a programme of action to achieve them and describing the methods for monitoring and evaluating the actions undertaken by the urban area.

In 2005, Grenoble-Alpes Métropole was the first conurbation in France to adopt a Climate Plan. Since then, the "Climate Plan" has become the "Climate Air Energy Plan" and has succeeded in reducing emissions and atmospheric pollutants (period 2005-2016):

However, almost the entire population is exposed to annual concentrations of fine particles in excess of WHO guidelines. Hence the need of constantly updating the plan in order to adapt to the city's current features and needs. The las update reameind in force until February 2020 was that of 2014-2018 (you can check its results here).

In order to update the plan to its 2020-2030 edition, Grenoble-Alpes Métropole launched a public consultation process in January 2019 until March 2019, which consisted of different sections.

The first one provided an online space for everyone to suggest general or specific comments. To provide citizens with the adequate background and information, the site includes an Avis de participation du public and a summary document on the issues to be tackled within the participatory process. In this period, 52 proposals were submitted. You can check them here.

Users of the platform can make, endorse and refuse proposals within these categories. Here, 399 contributions were made and 2016 votes were cast by 290 participants. You can consult all the interactions here.

The third section asked citizens to describe the actions they are taking or they would be willing to take to fight climate change. 51 suggestions were registered here.

All in all, the platform saw 502 contributions and 2980 votes from 381 participants. You can find here a document which gathers all the inputs from this consultation. On this basis, the public authorities elaborated a draft version of the Plan, and presented it online for the public to propose final observations. You can find here the conclusions of this consultation.

Finally, the 7 February 2020, the Métropole ratified and published the Plan Climat Air Énergie 2020-2030. The new plan structures actios in 5 groups: adapting the territory to climate change, fighting air pollution and reducing greenhouse gas emissions, making the most of our resources to reduce our carbon footprint and store CO2, the need for collective mobilisation, an exemplary city.

The new plan focuses on achieving the objectives for 2050 in terms of climate neutrality (data compared to 2005 levels): 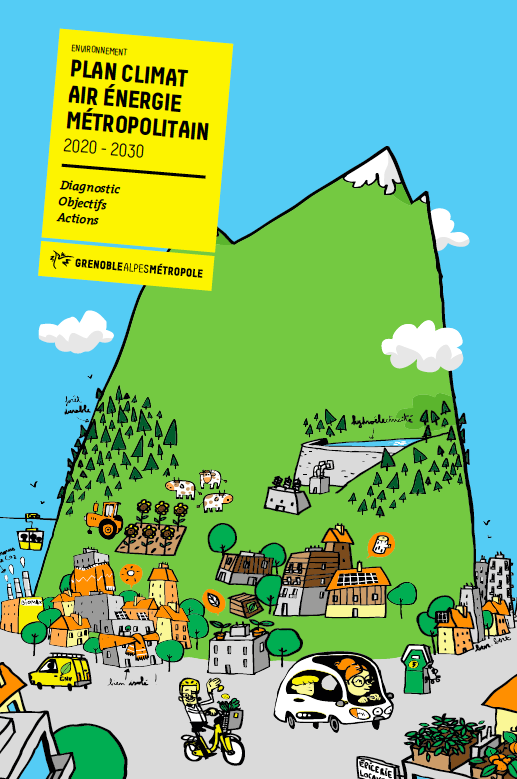