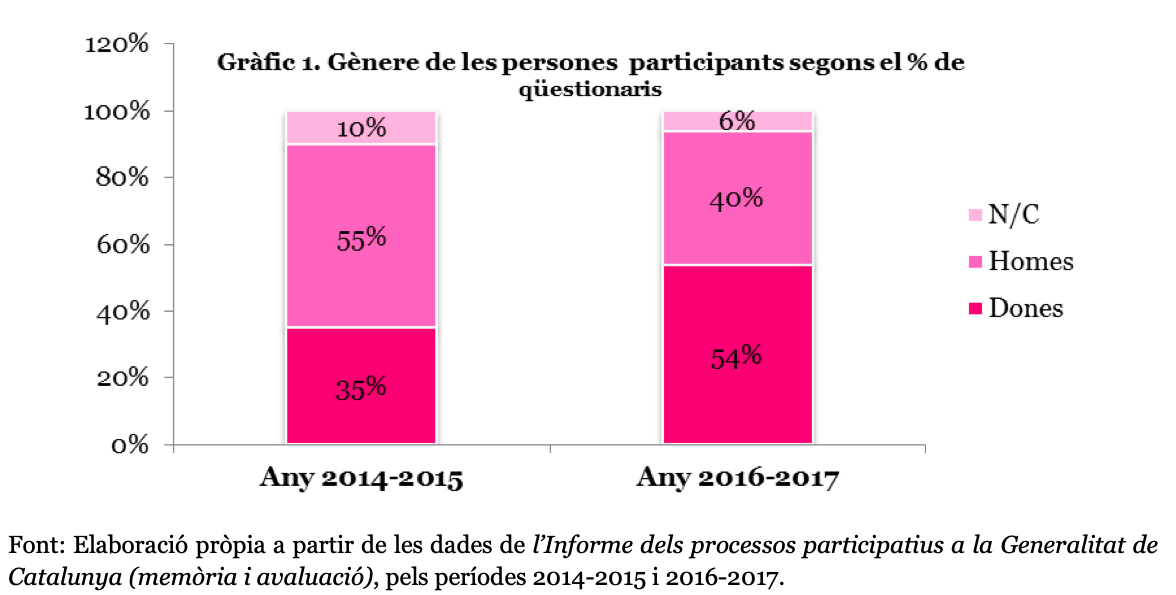 We consider that the objective of the project has been achieved in its entirety.

This allows us to tackle, in the coming months, another project related to the impact of the changes introduced in the contracts, training, protocols and data collection on gender mainstreaming.

The experience began with an open debate on Twitter for the collection of materials dealing with this issue (reports, protocols, academic articles, etc.), in the period December 2017 - January 2018.

At the same time, the need to create this project (consisting of analysis, improvement of internal procedures and publication of the guide) was discussed with the Catalan Women's Institute of the Government of Catalonia, the body dependent on the Catalan government for the promotion of gender equality policies.

Aware of the void in the sector of citizen participation, as well as the need to develop the field, a call was made for a consultancy on the issue which was attended by six civil society organisations specialised in gender.

From May 2019 to December 2019, several meetings were held with people of different responsibilities within the Administration, collaborating companies, data processing and documentary analysis, attendance at events and (authorised) monitoring of citizen councils, as well as training (participation-action type) with the team of the general directorate of citizen participation.

This project has involved, in different phases:

To our knowledge, this is the first time that a systematic application to the gender mainstreaming approach to citizen participation is made.

At the level of strategic public policy plans, gender mainstreaming is not a new idea. Formally expressed in the Platform for Action resulting from the 4th World Conference on Women in Beijing (1995), it has been gradually accepted since then. However, we were not aware of any purely sectoral approach to the field of citizen participation. We had indeed been able to find gender mainstreaming strategies in areas close to citizen participation. On the one hand, in the field of development cooperation, especially in strategies aimed at capacity building and institutional quality. On the other hand, in the field of urban planning, where feminism has always had a very strong evolutionary front since it is the point where the public and private spheres cross, a zone of friction due to the construction of many discriminations based on gender. Finally, and related to the previous ones, in the field of democratic quality and institutional transformation, especially related to gender equity in the institutions of representative democracy.

The main innovative element of the experience is therefore to generate a vision of gender mainstreaming specifically designed for the area of citizen participation, with its similarities to other areas, but also with its particularities.

On the other hand, our approach has sought to be - obligatorily - intersectional, given that citizen participation is, at the same time, a vector of inclusion and a vector of deepening existing segregations. Thus, and as can be seen in the Guide to Gender Mainstreaming in Citizen Participation Processes, dialogue with other factors of exclusion and vulnerability is constant.

Our project has been designed from the beginning to be fully transferable to everyone.

Beyond the different analyses, proposals for improvement and incorporation of such improvements in our own instruments, we wanted to make an abstraction of both the problem of gender discrimination and the good practices for a good mainstreaming of gender policies in citizen participation.

Thus, the Guide to Gender Mainstreaming in Citizen Participation Processes, even with its possible biases and partial views, aims to be a compendium of knowledge and procedures perfectly applicable to any type of participatory process designed and carried out in any corner of the world, both by public administration at its different levels and by organised civil society.

In our particular case, both the guide and the internal documents will be applied systematically and repeatedly in all participation projects and in each of their different phases: design, public procurement, information and communication, promotion of events and advice, evaluation.

The experience began with dialogue with some civil society associations that were working in the field of gender equity. The regulatory framework applicable to Spain and, in particular, to Catalonia was also very favourable to the initiative. Among others, we had:

Massive social phenomena such as the #MeToo (2018) or #Cuéntalo (2018) movements made very clear demands on public representatives to take action on the issue of gender violence in particular and discrimination in general. Citizen participation, the bridge par excellence between citizens and the Administration, could not be left out.

On the other hand, the proliferation of instruments and channels of citizen participation, as well as the growing demand for participation processes - very relevant in Spain since the Indignados movement (15M, 2015) - made this process practically unavoidable.

Internally, the project has consisted of five checks and balances between gender experts, users and control technicians.

Thus, all the processes and sub-products of the project have been evaluated by different people at every step.

As of today, two evaluations are pending:

This project can enrich all other projects. A strong lever for the emergence of gender in citizen participation. The proposal is innovative in reviewing literature and praxis, and defining guidelines of action.