To create a democratic process which engages residents on how to spend a portion of the city's budget.

The implementation of PB Durham Cycle 1 which included over 500 project proposals and over 10,000 resident voting in the first ever PB process.

Projects were evaluated and scored based upon equity, impact and feasibility. Residents that were involved in the process were diverse. 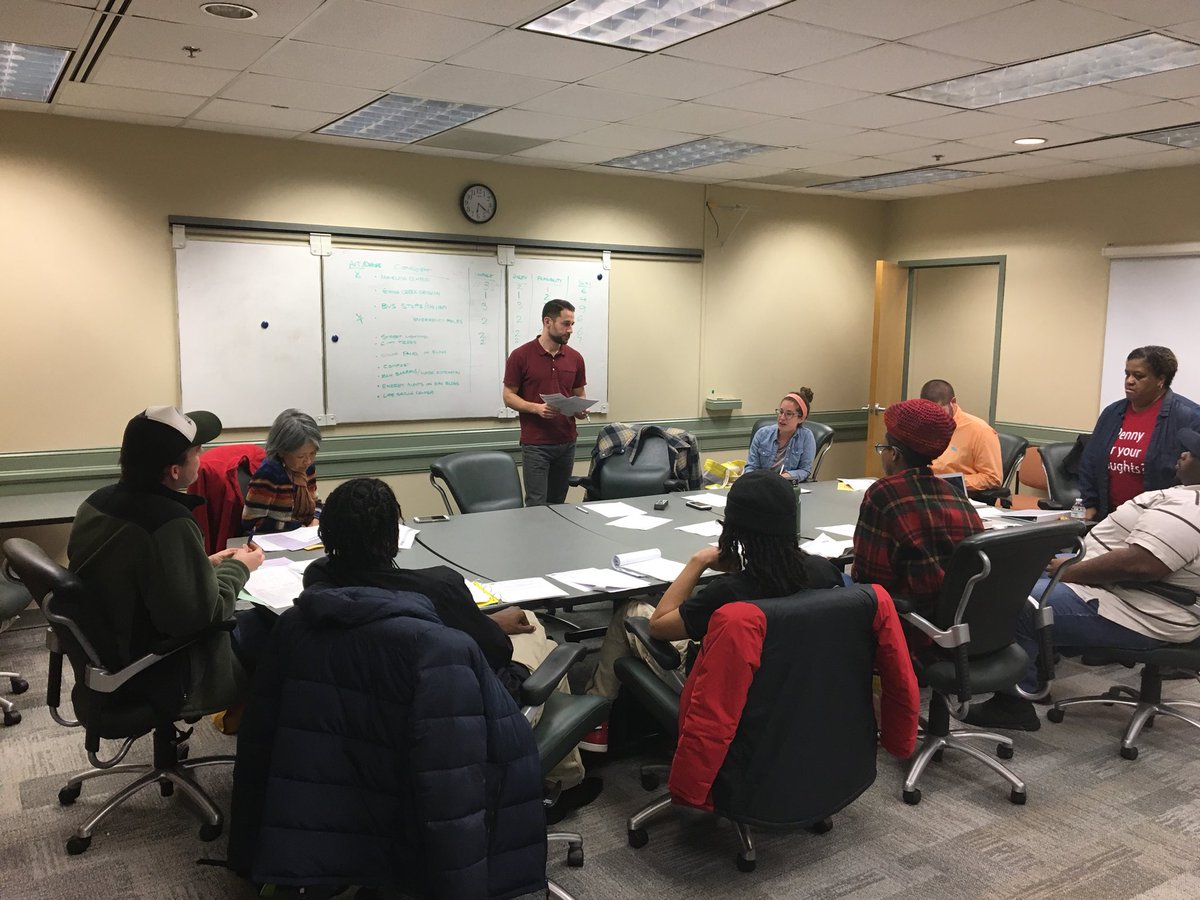 Because 2018 was the first year of the implementation of PB in Durham, the City Council was bold in allowing residents to decide how to spend $2.4 million of the city's $500 million overall budget. Please note that this percentage is the highest percentage of PB funds compared to the overall budget in the U.S. Due to this bold move, the City Council was serious about ensuring that residents had a say so on how to spend a portion of the city's budget. Nonprofits, NCCU, DPS, Durham Technical Community College, Durham Housing Authority, home associations, Durham Bulls (minor baseball team), community leaders, churches and residents eventually understood this bold move and felt as though they had a chance to really improve their community. Over 500 project proposals were submitted and over 10,000 residents 13 and older voting in PB Durham for the first time.

To truly understand Participatory Budgeting (PB) Durham, it is important to know a little about Durham and its history. The city of Durham has approximately 275,000 residents. The racial composition of the city is 43% white, 41% black, 14% Hispanic, etc. In U.S history, African Americans, Native Americans, and other minority groups experience many injustices that adversely impacted these communities. Because Durham has always had prominent African-American culture, it is fitting to speak about blacks and their history. Many Africans were brought to the U.S against their will to provide free labor, which ultimately resulted in slavery. The enslavement of African Americans led to the bloodiest war, Civil War, which was a fight against the north versus south. Ultimately the north prevailed, which led to the emancipation of slaves; however, many African-Americans did not experience true freedom during the Reconstruction period especially in the southern states. In the southern region of the United States, Jim Crow laws were state and local laws that hindered the progress of African Americans during this time, which resulted in racial segregation and many injustices. All were enacted in the late 19th and early 20th centuries by white Democratic-dominated state legislatures to disenfranchise and remove tireless political and economic gains made by African-Americans during this period. In addition, during this period many blacks witnessed intimidation and many were killed.

During this period in Durham, there was a beacon of hope, where African-American communities were thriving in many aspects of day to day life. According to the North Carolina Office of Archives and History, Parrish Street in Durham was the hub of African American business activity. Moreover, the four-block district was known as "Black Wall Street," a reference to the district of New York City that is home to the New York Stock Exchange, which is a worldwide known financial hub. Parrish Street bordered the Hayti community, Durham's main African American residential district, and the two districts together served as the center of black life in Durham. In 1906, the North Carolina Mutual Life Insurance Company, the nation's largest black-owned insurance company, moved its headquarters to Parrish Street. It was later joined by the Mechanics and Farmers Bank, and the founder of North Carolina Mutual also invested in real estate and textiles. National prominent black leaders W. E. B. DuBois and Booker T. Washington both visited the city, in 1910 and 1912, respectively, and praised black entrepreneurship and the tolerance of whites. In the 1960s, urban renewal wiped out much of Hayti and Durham's black business community, but by that time, Parrish Street's heyday had passed.

Even though Durham experienced some successes, the systemic injustices and inequalities adversely impacted the successes that were made during a time of progress. Due to Durham's resiliency, residents continued to fight for equality and this was apparent during the Civil Rights movement of the 1950s and 1960s. African-Americans, whites, and others fought for equal rights for African-Americans and key federal legislation was passed in an attempt to right the wrongs of the past. In modern day, Durham is a vibrant and progressive city that continues to strive to become a more inclusive city not just for African-Americans but for the city's growing Hispanic/Latinx community, LGBTQ community, and others.  Durham recognizes that there are still some inequities for certain underserved residents, groups and communities. More importantly,  Durham is at the forefront of addressing these inequities that are impacting the most vulnerable communitiesIn an effort to address these inequities and attempt to right these wrongs, the PB Steering Committee put forth these goals in which PB Durham was to address:

1. Projects that serve the most marginalized communities are implemented as a result of this process.

2. Build greater equity throughout the City of Durham by allocating resources in ways that correct past harm.

3. Engage more diverse populations in making decisions about how resources are used.

4. Increase overall engagement in decision making in the city of Durham.

Once the aforementioned goals were set by the PB Steering Committee, the outreach and engagement strategy was developed to attempt to accomplish these goals. The outreach strategy consisted of identifying underserved communities based upon median income and also racial makeup. The innovative aspect to this approach was to "meet people where they are". This approach was extremely vital when speaking with these communities regarding the needs in their communities. PB staff worked closely with DataWorks, City of Durham independent data provider, to use data to assist with targeting underserved communities. Heat maps were critical in identifying these underserved neighborhoods and ensuring that these individuals had a voice in the process. The City Council also understood the importance of including young people because these individuals are not traditionally at the table when decisions are being made especially on how to spend a public budget. Moreover, that is why it was critical that PB staff partnered with the DPS administration to integrate PB into DPS' social studies curriculum. Students had the opportunity to partake in a mock PB process to educate them about the overall process. Ultimately these students had the opportunity to submit project proposals, develop projects and vote on these projects. 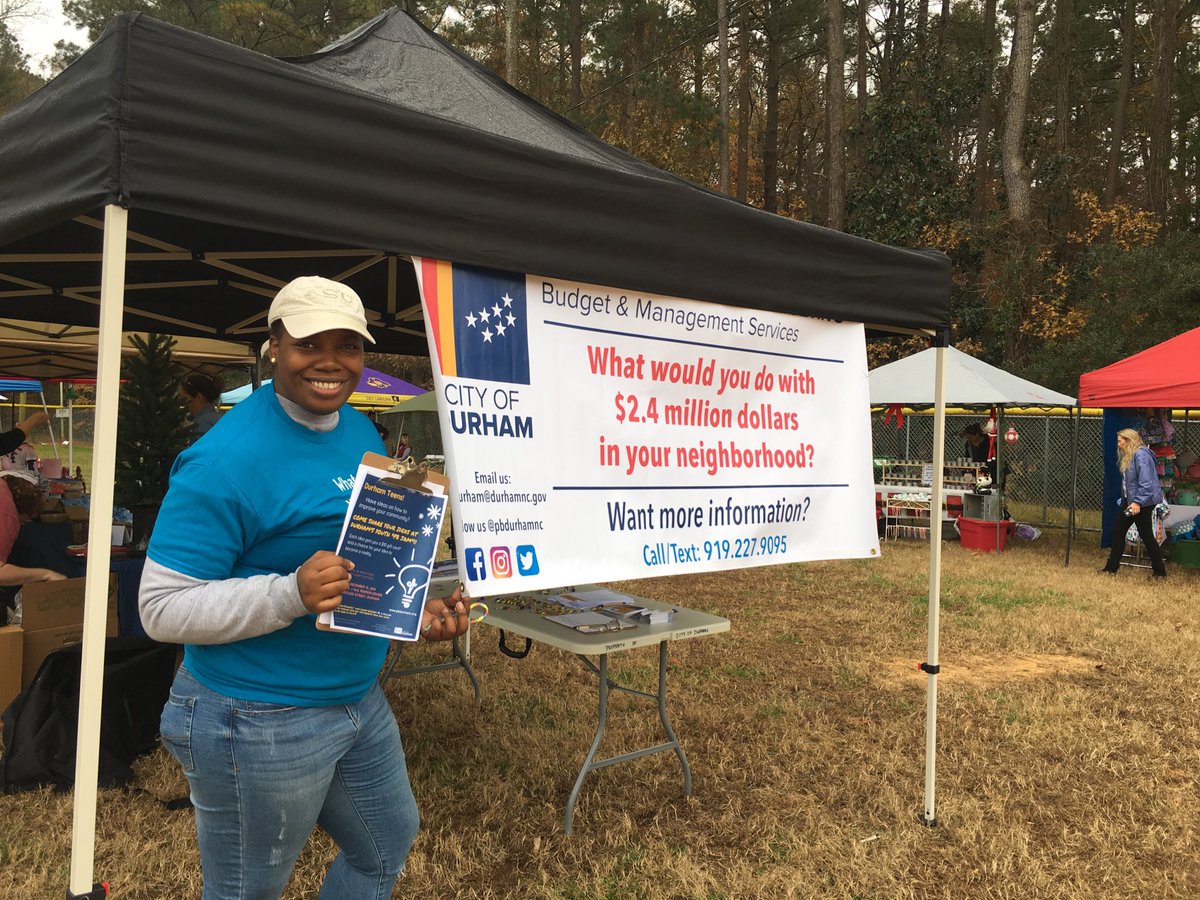 As stated before, the key to the overall success of PB Durham was meeting individuals where they are. A well developed and intentional outreach and engagement strategy is vital in ensuring that marginalized communities and non-traditional voters have the opportunity to participate. In the case of PB Durham, the outreach and engagement strategy served as a roadmap to addressing the PB Steering Committee goals. In addition, the strategy consisted of identifying underserved communities based upon median income, racial makeup, age demographics, specific amenities, etc. This approach was extremely vital when speaking with these communities regarding the needs in their communities. PB staff worked closely with DataWorks, a City of Durham independent data provider, to use data to assist with targeting underserved communities. Heat maps were used as a visual to better understand the lack of resources and what demographic resided in those particular areas.

One of the most important aspects of the process was building relationships with neighborhood groups/leaders, nonprofits and regular residents to start conversations about the needs in their communities. PB staff and volunteers met residents where they were, such as engaging residents at bus stations/bus stops, Hispanic grocery stores and banks, churches, social services facilities, courthouse, justice involved individuals that were incarcerated, etc. We also partnered with Durham Public Schools to incorporate the PB process in their social studies curriculum for middle and high school studies. Many social studies teachers had the opportunity to teach students about their needs in their communities, allowing them to understand the role that they can play in improving their communities.

In summation, the aforementioned strategies are transferable because it truly takes learning about the history of the underserved communities/populations through using data, building relationships, and most importantly meeting these individuals where they are.

It is based upon using data to develop your outreach and engagement strategy. This should include data that represents underserved communities and meeting these individuals where they are. Most importantly, it is critical to identify community partners who have a true understanding of the history of the community. For the most part, residents tend to have a mistrust towards the government because of what has previously been made, so the outcome may not have been shared or perceived amongst residents. Building trust is critical in building lasting relationships. That is why the City Council appointed community leaders in their Wards (which represented the makeup of Durham) to serve on the PB Steering Committee which was the first step of building trust amongst the community. 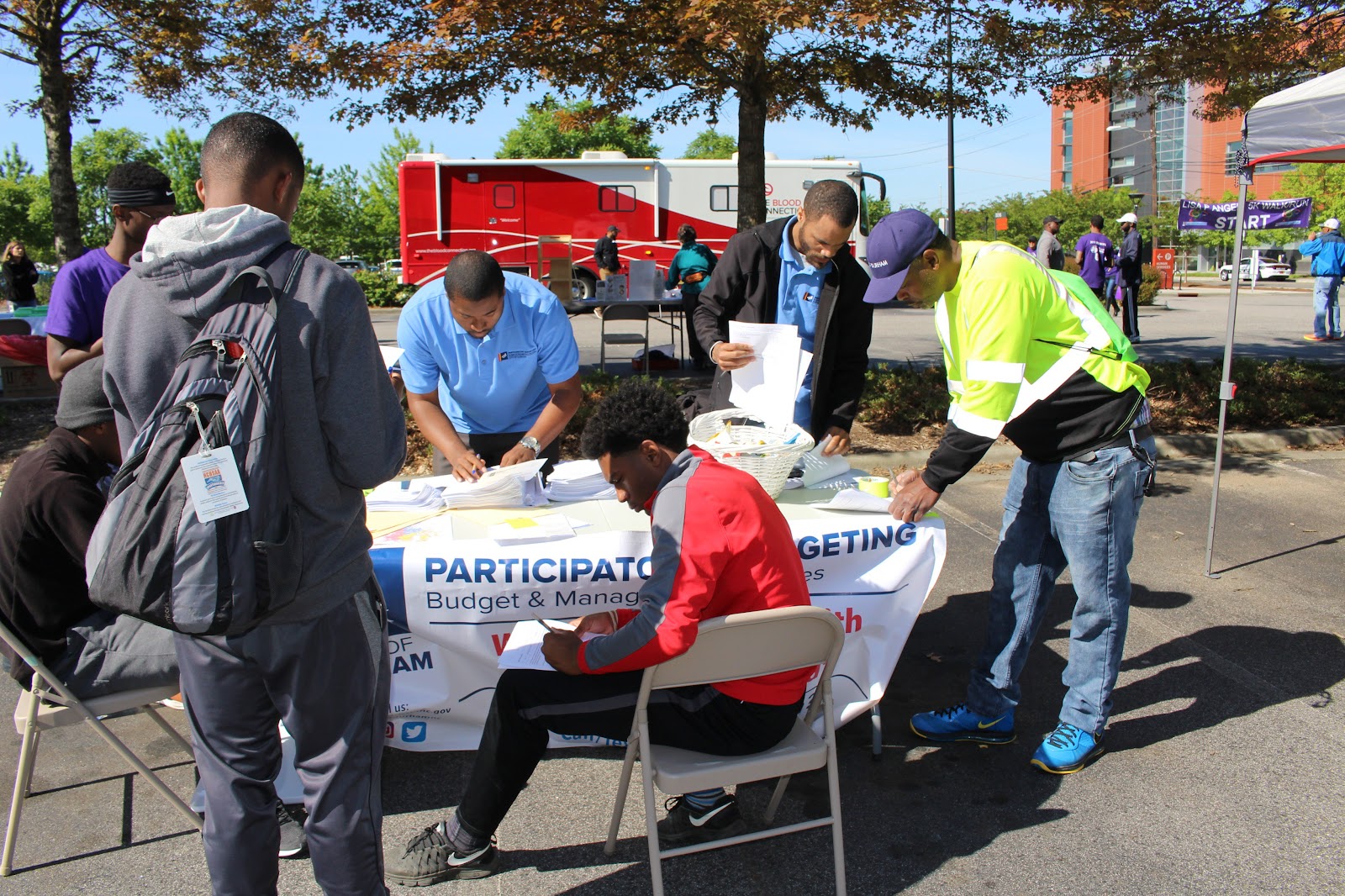 Transparency of PB Durham was critical to understanding PB Durham successes and also gaps. In addition, that is why PB staff decided to pick NCCU Public Administration to serve as the third party evaluator of the process. Some of the key findings in the report included:

"Findings of this evaluation report include strong evidence of success in PB Cycle 1 in meeting key metrics, as well as progress towards the identified goals and demonstration of successful capacity building through novel community engagement activities. Durham's PB process was very successful in generating new practices for resident engagement with the city. More than 500 projects were generated during the idea collection phase, and more than 10,000 Durham residents voted on proposed projects. Further, the process engaged more than 120 formal volunteers as part of the process. The majority of volunteers (65%) responding to the survey stated that, after their experiences with PB Durham, they would be likely to volunteer with the City again. Participants generally reported the process was accessible and easy to engage with, though there are opportunities for improvement and continued attention to equity". The full report is here.

There are several winning projects that are being implemented or have been implemented such as:

Please note that PB Durham is not a perfect process; however, we understand that there are pressing needs in underserved communities. PB Durham is not the complete answer to the entire needs of communities; however, PB Durham can serve as a stepping stone and addressing some of these needs and facilitating a much larger conversation.

Good innovation as a mixture of techniques from in-person to digital used while also ensuring the reach was inclusive and diverse.

While participaty budgeting is not a novel approach for citizen engagment, Durham's approach to identifying marginalised groups through heat maps and data and engaging them specifically in the process through partners is innovative. Providing a grant and teaching participatory budgeting in school is innovative. Having conducted an external evaluation is a positive step, but this evaluation could be improved by also including the residents that participated and those that did not.