Playing and participating. When children are the protagonists of urban planning

The main objective was to achieve greater levels of equality in participation and to incorporate diversity as a criterion for inclusion. In other words, to guarantee the effective fulfilment of children's right to be heard and to actively participate in the transformation of the city.

Although the playground remodelling project is still in progress, many of the goals initially set were achieved.

Firstly, it is important to point out that, from the outset, participatory dynamics were designed with the intention of correcting the adult-centred perspective and incorporating the viewpoint of those who are the most frequent users of the squares and playgrounds, that is, children. In this regard, two dynamics were designed - differentiated by age - with the aim of extracting children's perceptions, opinions and desires with regard to the use of playgrounds.

Dynamic A, called "A Day in the Playground", consisted of a creative drawing activity on lecterns in each square with a playground, with children between the ages of 3 and 5. Each child could draw the playground of their dreams. To do this, they had a lectern, a sheet of paper and coloured pencils. There could be up to 20 children in the space simultaneously. The playground was fenced so that the adults accompanying the children would let them in alone and not interrupt them during the activity. When they entered, they were guided by a facilitator to their lectern, who explained the instructions and encouraged them to create. The objective was for them to express themselves through drawing and, fundamentally, to comment with the coordinators on what they had drawn, why, what they liked about their yard, what they wanted to change, what games were missing, etc. In this sense, the exercise of drawing was a starting point for them to put their imagination to work and thus explore their needs, desires and opinions. For this reason, the task of the facilitators was fundamental: not only did they have to accompany the children and ensure that they had all the necessary materials, but they also had to pay close attention to their words, make subtle inquiries and take notes on an observation sheet.

Dynamic B, called "Little Scouts", consisted of a co-creation activity at work tables near the playground with children aged 6 to 10. The proposal was to meet in groups of 7 or 8 children, accompanied by a facilitator and an observer, around a table that had an adapted plan of the playground of the square in the centre. Within the space there were 4 tables, so there could be up to 30 children participating simultaneously. The objective of this activity was to carry out a group diagnosis of the current situation of the playground, emphasising the perceptions, tastes and opinions of children. At the same time, it sought to identify their wishes and expectations for the future playground, so as to be able to offer recommendations to the area in charge of the remodelling. Guided by a facilitator, the children had to indicate on the map the areas of the playground that they liked best and least, that they found dangerous and those that, according to their perception, were the most crowded.

To this end, they all had stickers that referred to each item. For example, they used a smiley to indicate the area they liked the most; to indicate the busiest areas they used the figure of a group of children. Once this first stage was finished, they were given a final instruction to draw or write in sticky notes what they wanted to add to the playground (new games, trees or whatever they could think of).

In quantitative terms, the experience was very successful, as it brought together 656 children from the Autonomous City of Buenos Aires to express their views and desires regarding the use of playgrounds. However, this was only the beginning, since the main objective was to generate a report that analyses the information gathered in the observations. A total of 57 observation sheets were completed, in which the children's assessments of the games and their proposals for the future were recorded. This report was submitted as a technical input to the Under-Secretariat for Community Management, the government area responsible for the renovation, one week after the experience was completed. A few weeks later the coronavirus crisis occurred, which is why all the work has been suspended. For this reason, it is not yet possible to evaluate to what extent the findings of the experience with children will be considered.

Likewise, it is worth emphasising the enormous enthusiasm and joy with which most of the children received the proposal, which gives the indication of their need to be heard and taken into account in terms of the public policies that involve them. 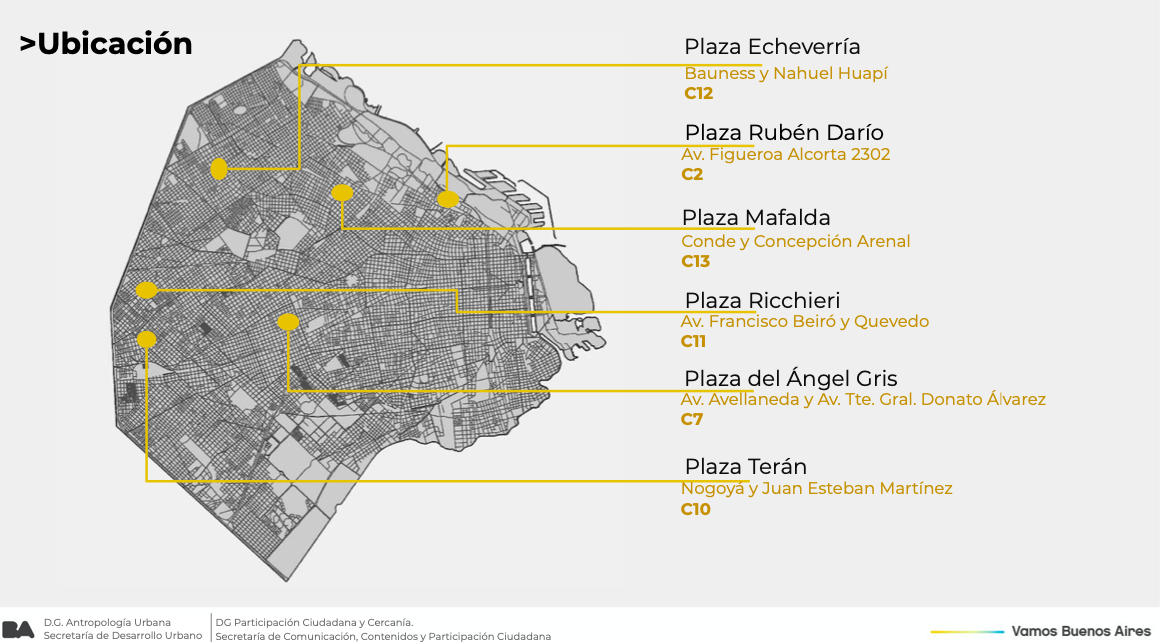 The experience was articulated with different areas of government in order to join efforts, capitalise on experiences and enhance the expertise of each area. In the first place, work was carried out jointly with the Undersecretariat of Community Management. This area not only proposed to carry out citizen participation activities with children regarding the remodelling of playgrounds, but also guaranteed access to the squares. Once the activities were completed, it coordinated with the General Directorate of Urban Anthropology and the Child Friendly City Programme (both belonging to the Secretariat of Urban Development) to analyse the results obtained. The success of this coordination is demonstrated by the fact that the process has been completed, in spite of results implementation having been temporarily suspended for the above-mentioned reasons.

The Community Management Secretariat guaranteed access to the squares and provided the plans for the playgrounds to adapt them in order to develop Dynamic B with the children. It also supervised the deployment of the activities. The Urban Anthropology Department provided its expertise in the layout and visualisation of the final report that was submitted to the Community Management Secretariat. Finally, the Child Friendly City Programme contributed its knowledge of the historical demands of children in order to strengthen the report.

The most innovative element is that the real protagonists of the experience were children, and not their parents or the adults through them. This can be seen fundamentally in dynamic B, where they acted as urban designers on a plan of the playground and presented their ideas and opinions.

Children's playgrounds or recreational spaces are in every city and are continually being renovated. In this sense, beyond context differences, the methodology is applicable in any of these cases. In addition, the DGPCyC has prepared a document that records the participatory process and can be requested by the institution that requires it. Finally, the dynamics are easily replicable and have appeal to children, while drawing and visual production is a universal practice that immediately appeals to them.

The experience was feasible as, from the beginning, it was articulated with the Under-Secretary of Communal Management, the area that carries out the management of the city's squares. This linkage made it possible to plan activities with the certainty that their results would be transferred to specific works.

In addition, the DGPCyC carried out an observational study in all six squares in order to confirm that the participatory dynamics could be developed there.

In this study, carried out during the same hours as the activities were scheduled (from 6-7:30 pm), the following points were analysed: 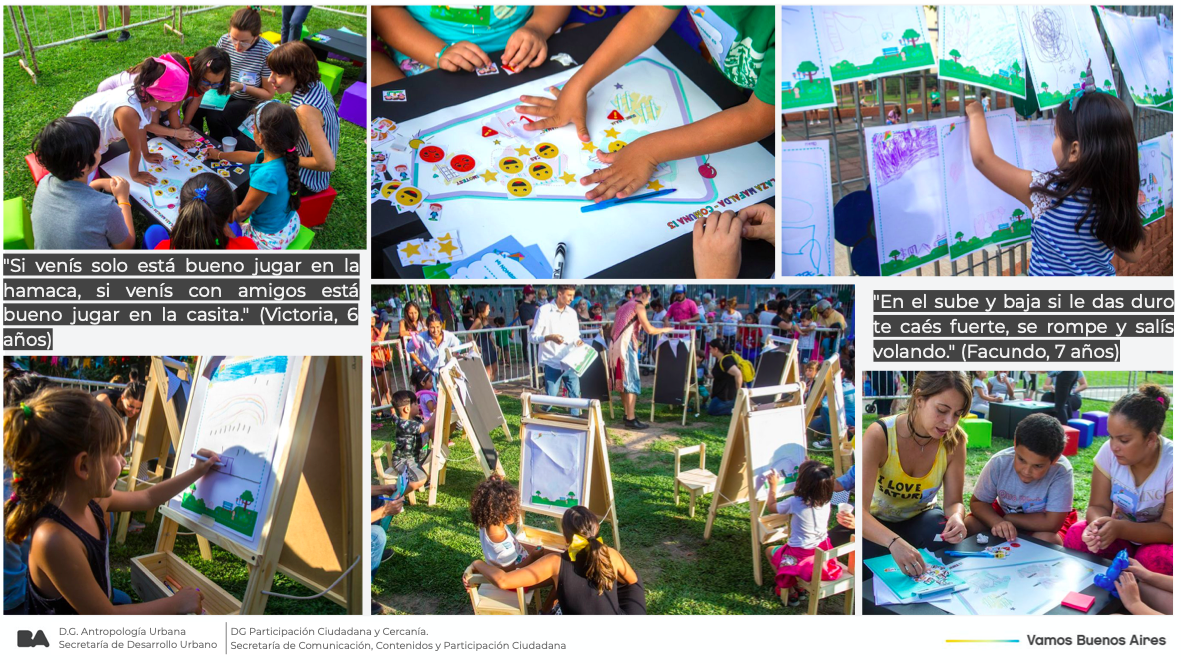 The initiative was documented through two reports. The first one was technical and was addressed to the competent area, in which the assessment of the games and playground equipment made by the children, the main findings and recommendations for the remodelling of each square were detailed. The second report aimed at systematising the methodological process and analysing results in depth, taking into account the participatory process in a comprehensive way.

Among the results obtained, the following can be mentioned:

Finally, as already mentioned, the renovation of the playgrounds has been suspended due to the current health crisis. For this reason, a full assessment of the implementation of the findings made through this participatory process cannot yet be made. 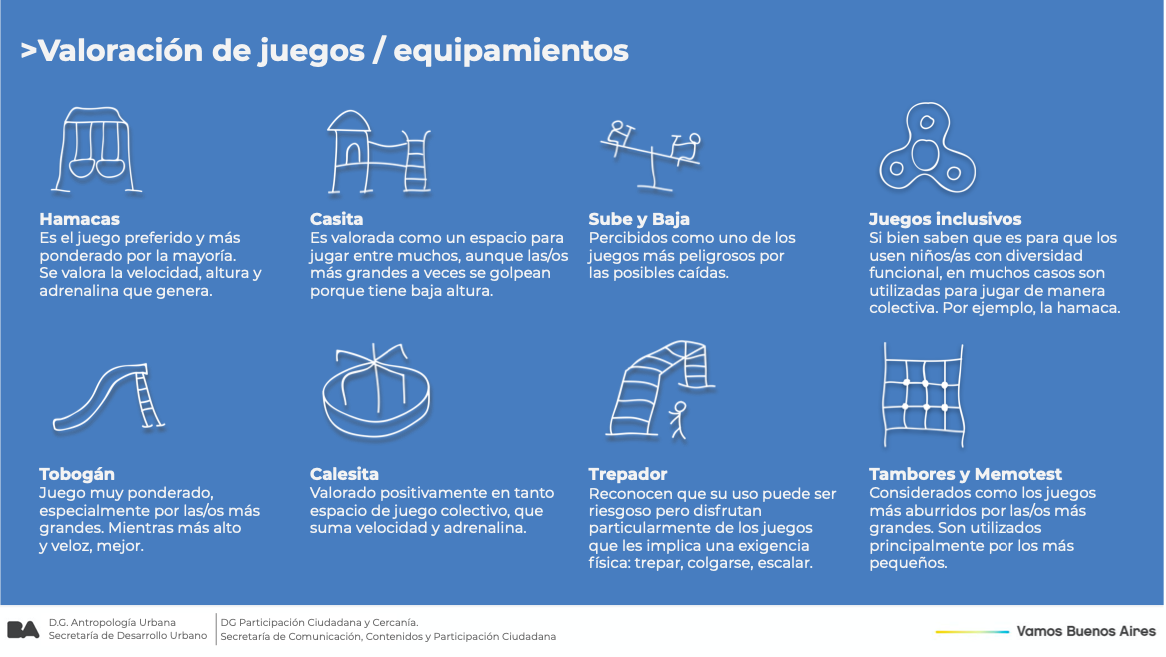 The co-design of the play areas seems to me to be an innovative project and allows us to give a deeper ambition to the participation of children in the actions of the municipality than we can generally see.

The innovative aspect is to guarantee the effective fulfilment of the child's right to be heard and to actively participate in the transformation of the city, through recreational dynamics. It is a very rich participatory process, which uses public spaces and children's imagination as protagonists in thinking about the city.