After the change of management, the equipment will be a space from which to work on the current challenges of democracy through open and proximity technology.

Since last November, the Canódromo has been called Ateneo de Innovación Digital y Democrática (Digital and Democratic Innovation Lab). The change of management of the facility has involved a reorientation of its activity and also a greater openness to the neighborhood and citizenship. The space is now focused on the promotion, encouragement and training in open technology and citizen participation. The Ateneo de Innovación Digital y Democrática will be managed for the next few years by the Colectic cooperative. The public facility specializes in the promotion of and access to free technologies, digital rights and the relationship between technology and democracy. The aim is to show how technologies can be put at the service of citizens so that they can actively participate in the public life of the city. In this sense, the facility will host nine projects over the next two years, chosen in a public call made in February, to which 17 proposals were submitted. 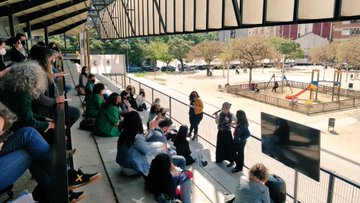 The Barcelona City Council has launched a program of activities focused on open technologies, participatory democracy and digital culture in the Canódromo-Athenaeum of Digital Innovation and Democracy to be held between June and August. The consistory has highlighted, in a statement, the meeting of June 17 'Citizen laboratories for a democratic city', a space for exchange of experiences and collective construction in which a dozen initiatives from all over the State will participate.