Democracy in cities and territories

This paper has been produced as an Issue-Based Contribution to the sixth Global Report on Local Democracy and Decentralization (GOLD VI): the flagship publication of the organized constituency of local and regional governments represented in United Cities and Local Governments. The GOLD VI report has been produced in partnership with the Development Planning Unit (University College London), through the programme Knowledge in Action for Urban Equality (KNOW). GOLD VI focuses on how local and regional governments can address the local manifestations of growing inequalities and contribute to create 'Pathways toward urban and territorial equality'.

The GOLD VI report has been produced through a large-scale international co-production process, bringing together over a hundred representatives of local and regional governments, academics and civil society organizations. This paper is an outcome of this process and is part of the GOLD VI Working Paper series, which collects the 22 Issue-Based Contributions produced as part of the GOLD VI process.

In particular, the present paper has contributed to Chapter 9 on 'Democratizing', which focuses on the challenges and opportunities for local and regional governments in implementing meaningful participatory processes, and democratizing decision-making, unpacking asymmetries of power and the underpinning trends affecting processes of democratization. Through the lens of 'democratizing', the chapter explores how local and regional governments can promote more egalitarian, participatory and democratic processes, giving voice to marginalized groups of society, minorities and other groups, and thus contribute to urban and territorial equality.

This paper has been produced by Laura Roth. She is a post-doctoral researcher at Universitat Jaume I in Castelló de la Plana. She is also an activist and a consultant, and focuses on local democracy, political culture and feminism. 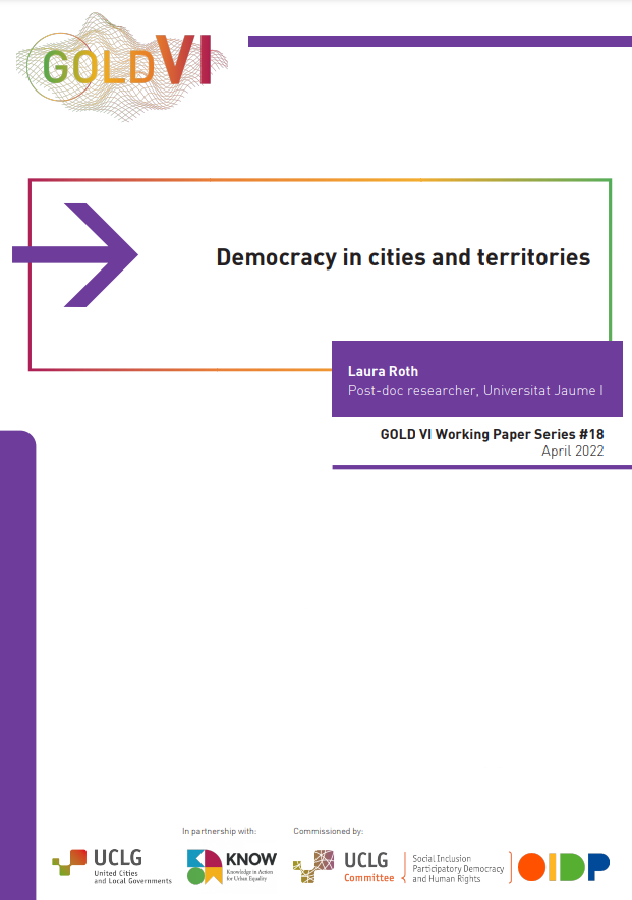