The debate on democratic renewal continues to be present in the debates of the World Organisation of Local and Regional Governments. 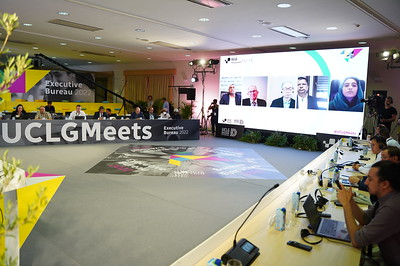 The 2022 UCLG Executive Bureau meetings were held from 13 to 15 June under the theme: "Local and regional governments fostering peace at the frontline of emergencies". The meeting took place in Seville, in the framework of the Mediterranean Forum on Urban Migration. The IOPD was represented by councillors Emmanuel Carroz from Grenoble and Med Wajdi Aydi from Sfax, as well as the coordinator of the secretariat Adrià Duarte.

The IOPD organised the session "Renewing Democracy from the bottom up", in cooperation with the UCLG Policy Council on Multilevel Territorial Governance and Sustainable Financing, and the Global Coalition for Democracy. The aim of the debate was to rethink the way people engage with governments as a means to build trust through greater transparency, openness and accountability. 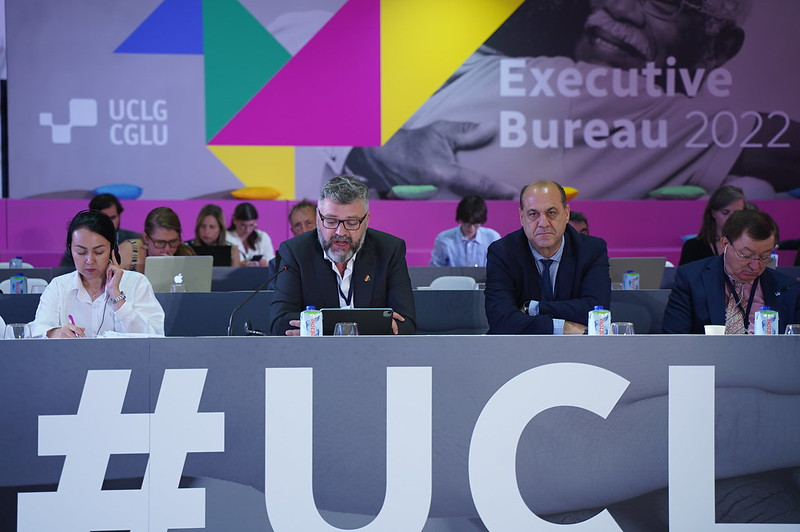 Massimo Tommasoli, Director of Global Programmes and Permanent Observer for International IDEA to the UN, kicked-off the debate with UCLG Secretary-General Emilia Saiz, recalling the relevance of local democracy to foster engagement at the local level and better cope with impacts in the post-pandemic world. Vice-President of UCLG for the Forum of Regions and President of CONGOPE, Pablo Jurado, called for strengthening bottom-up multilevel governance and grassroot democracy so the needs of people are known and addressed collectively. From the local to the state level.

Rudi Borrmann, Deputy Director of OGP Local, stressed the need to tackle the difference between the language and the narratives used to bring citizens to participate with creativity and capacity building. Sergio Arredondo, Secretary General of FLACMA, wrapped up the session by recalling the need to connect global action with the daily challenges of communities and achieve transformation by putting people at the centre of local action – and the opportunity and responsibility it entails for UCLG to be at the forefront of democracy renewal.