The session counted with the participation of Yasmin Pérez Haro (Equality Directress at Mexico City's  Women Secretariat), Martha López (Social Inclusion Directress of Iztapalapa), Imen Ouardani (Sousse  Vice-Mayor), Silvia Llorente (Project Officer at Metropolis), Dalia Pérez (Project Officer at Arkemetría  Social) and video presentation by Ernestine Ronai and Magali Fricaudet (Seine Saint Denis department).  Amanda Fléty was the moderator of the session as coordinator of the UCLG CSIPDHR. Several local  authorities within the Committee promoted, on Women's Day 2019, the open letter "The Right to the City  for Women", which was finally signed by the head of government of Mexico City and mayors of Montreal and Barcelona. The Iztapalapa session intended to develop the contents of this open letter further. 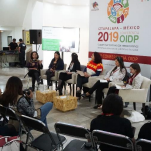 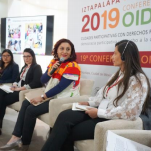 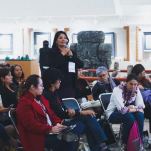 The session showcased the existing diversity of strategies and approaches by which local governments foster women participation in designing, implementing and monitoring policies aimed at realizing women

rights. In Mexico City, a participatory process specifically targeting women was put in place at the neighborhood level with a view to address socio-spatial disparities on this topic between city areas. Directress Yasmin Pérez noted  how, " if citizen participation is the best way we have to ensure we are responsive to social changes and demands by  society, then we must also foster participation in women policies ". Municipalities like Iztapalapa give voice to women  to define what thematic areas should be a priority for local policy-making. Silvia Llorente recalled how gender  equality is among the five pillars of a participatory metropolitan governance, and that gender equality should be  promoted as a cross-cutting approach and not only a sectoral policy. Dália Pérez noted that transparent and open  access to public information is essential to secure an adequate participation process and robust equality policies at  the local level. In line with Magali Fricaudet, she mentioned how these policies ultimately sought to secure human  rights access by women, who see themselves deprived of this access only because of their gender.

The session showed how municipal policies on gender equality are increasingly becoming more  consolidate across the world. A Women Secretariat has recently been formed within the local government of  Mexico City as a way to answer to very specific demands by citizens and women groups, but also put in place a  comprehensive municipal policy on the subject. Gender equality has been incorporated as a mainstream priority of  Iztapalapa's municipal government, something which is reflected in budget allocation, public service delivery or  public works. In the case of Tunisian cities, this process did not kick off until the 2014 modification of the country's  constitution, which resulted from the democratization process initiated in 2012. Seine Saint Denis has put in place  a pioneer local observatory aimed at informing local authorities on the extent of violence against women and girls  and propose ways to tackle it. This Observatory has managed to bring together all different government spheres and  civil society stakeholders working on this issue in the Seine Saint Denis territory.

The case for reinforced levels of women representation in local public office was especially made by Sousse  representative, who recalled the need to continue fostering equal representation in local councils. Women political  empowerement has been among the main priorities in defining a municipal full equality agenda after the country's  adoption of a democratic constitution in 2012. Different measures and joint action between political and social  leaders allowed to rapidly expand the number of women local councilors in the country over the last years.

According to all participants, dialogue with civil society and feminist groups is key to success on so many  layers of the policy process. Dalia Pérez presented her NGO initiative to monitor municipal policies in the field of  equality implemented in Mexico over the last years. For the Mexico City government, civil society cooperation helps  to give voice to all women, especially the ones at risk of being excluded, but also widen the government's policy  agenda on women rights. Cooperation is essential to ensure a successful implementation and monitoring phase of  these policies, according to Dalia Pérez and Directress Yasmin Pérez. In Tunisia, cooperation between municipal and  civil society leaders allowed to extend the levels of women political representation in different areas of local life.

Many local governments now recognize the need to integrate an intersectional approach to policy that  consider the needs of specific women who may see their situation aggravated because of their social class, skin  color, sexual orientation, etc. In Mexico City, participatory democracy initiatives aim to tackle existing disparities  in the levels of political engagement among women. Metropolis has also developed serious efforts in this topic,  gathering knowledge and connecting different policies in the field to gain visibility and experience.

Gender violence was repeatedly signaled out as one of the major threats pervading the full realization of women  rights, as noted by the Mexico City representative, who labeled it a "structural phenomena", or the Sousse one, who noted how efforts to eradicate gender violence were now well enshrined at the constitutional level. Seine Saint  Denis has put in place an advanced structure, the Observatory of Violences against Women, to combat this  phenomenon through prevention, monitoring and reparation initiatives.

Iztapalapa is particularly affected by this phenomenon (more than 67.000 reported cases of gender violence in the  family context, 3168 rape episodes and 112 abductions between 2012 and 2017). To tackle this situation, Iztapalpa  launched a Home Care Plan where municipal workers reach out families to provide information and foster  mediation. It also created an Observatory to gather information, advise the government and put in place  communication campaigns and materials, awareness-raising initiatives held in schools and civic centers as well as  training public workers and police. Directress López noted, however, how many women are still afraid to report their  situation to public officials, something which makes it harder for local authorities to respond.

Implementing gender-sensitive measures and transforming public space was deemed crucial to combat gender  violence and locally advancing a full equality agenda. Tackling harassment in public space through awareness raising is a key priority for Sousse, while Iztapalapa has put in place tactical urbanism measures to make key  pedestrian roads leading to public transportation or equipment safer to women (the "Vías Seguras"  program). Metropolis mapped metropolitan policies addressing gender violence prevention in public space across  the world, reaching the conclusion that only 36% of its members had implemented any measure in the field. Many  good practices were nonetheless identified after conducting the mapping, including exploratory walks, public  transportation reform, training municipal officers, security committees and building the capacities of civil society.

What other thematic areas are there, that are also key for women to fully attain their rights in cities? A citizen  participation initiative carried out in Mexico City allowed to identify some of them, which included fostering  economic autonomy, providing integral health attention for women and girls, recognizing culture as a lever for  women development and strengthening women groups institutional capacities. Access to education was also  identified as key in the process. Directress Yasmin Pérez noted how women illiteracy rates were higher in deprived

areas of Mexico City. Both its government and the one of Iztapalapa now offer opportunities for women to achieve  basic levels of literacy and access education services through its "Mujeres Estudiando" and "Pilares" programs.

Directress López stood out in drawing attention for the situation of working class households were women are the ones in charge - 30% in the case of Iztapalpa. Her municipality assumes that half of Iztapalpa population (out  of 2 million people) doesn't have access to health services and have a scarce access to water. Dália Pérez also  recalled the need to foster the implementation of dedicated specific social programs, and to provide concrete  solutions to women living in informal settlements. Both Mexico City and Iztapalpa representatives insisted on the  need to distribute care responsibility within households - according to Directress López, Mexican women devote  43 hours of their week (23% in total) in unpaid work caring for their houses and families (7% in the case of man).

Local authorities tend to see networking as an opportunity to advance women rights, both within their  own territory as well as across the world. Tunisian women councilors created for instance a network of their own,  where they reinforce solidarity bonds, debate and promote joint action. According to Councillor Ouardani,  taking part in international fora like the one of Iztapalapa allow local authorities from a country like Tunisia (which  has only become democratic recently) to get familiar with how participatory democracy and gender equality local  policies work in other countries. According to Directress López, getting to know others' experience may inspire cities  to promote policies in a different way, or address issues they didn't think of in the first place. Directress López also  mentioned a successful cooperation experience between Iztapalapa and UN Women.

In presenting the Seine Saint Denis observatory, Ernestine Ronai noted how her department now intends to  articulate different local observatories and policies fighting gender violence across the world to come out with a  shared strategy. Magali Fricaudet invited participants to join the initiative, which will focus on advocacy, policy exchange and giving visibility to local commitments and innovations. Silvia Llorente  recalled Metropolis commitment on gender equality and showcased some of the network's projects in the field.