The IOPD participated in the 2nd World Forum of Intermediary Cities

IOPD has taken part in the World Forum of Intermediary Cities organized by UCLG and the City of Küthaya as facilitator of an networking event and coordinating a High-Level Dialogue.

The UCLG Forum on Intermediary Cities is a consultation and policy development process that culminates in an event every two years. The Forum, conceived as a political process, is led by the City of Chefchaouen with the support of a core group of pilot intermediary cities. The 2nd World Forum had been hosted by the City of Küthaya in Turkey. 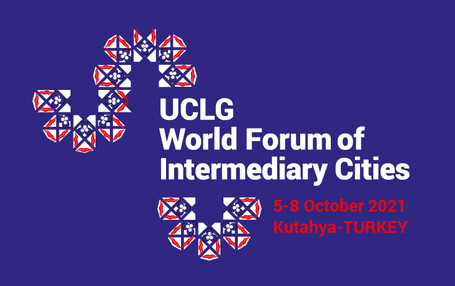 The dialogue focused on participatory budgeting (PB) as a tool for innovating ecological transformation and enhancing democratic innovation in cities. Three important issues were tackled during the session facilitated by Yves Cabannes, Emeritus Professor in Development Planning at the Bartlett Development Planning Unit, University College London.

1. Participants were asked to express their views on the main challenges for intermediary cities in the context of the pandemic.  They were invited to provide their views on the specific type of contribution that PB has brought through participation and deliberation to address these challenges.

Diego Cuesy presented the example of the city of San Pedro Garza García, a municipality located in a very large, industrial and rich metropolitan area in Mexico. Being one of the richest regions leads to being one of the worst in terms of urban and environmental planning and recycling and waste separation. Three years ago, a new government started to invest in environmental education policies. Thanks to the pandemic, San Pedro has taken these issues further and continued its commitment to PB as a transformational strategy.

Gisele Barbosa, from the city of Valongo, pointed out that since Covid we live in a new world. This new reality is an opportunity to invest in resilience for the future. Digitalisation during Covid has made it easier to reach citizens, to implement democratisation. This is an opportunity to capitalise on the participation of civil society in democratic life.

Tigran Bagdasaryan of the Russian Ministry of Finance highlighted how the problems caused by Covid persist. However, he noted a growth in all PB indicators. The number of PB practices has increased from 145 to 175. Russian federal legislation allows citizens to support projects, and 7% of the value of all projects comes from citizens. The pandemic was an opportunity to create new mechanisms for public participation in intermediary cities.

2. Secondly, participants were asked to comment on if Intermediary Cities are a better place (because of their more human scale, proximity between citizens and governments, town-country relationship, or others) to develop PB and other democratic innovation practices.

Firdaous Oussidhoum from UCLG World Secretariat highlighted two important things about the relationship between intermediary cities and PBs. Firstly, proximity allows a better understanding between citizenship and governance. Secondly Democracy is about demanding rights, and PB in intermediary cities allows this.

Diego Cuesy pointed out that intermediary cities are better for proximity.

Gisela Barbosa also found that intermediary cities achieve more effective results because they are closer to the population, so approaching problems and managing public services is much easier. This is also true in terms of social dynamics. Everyone knows their responsibilities, their rights and their role in their community. Proximity to citizens is essential to encourage future participation and it is necessary  to capitalise on the advantages of proximity which could generate a multiplier effect on participation.

Tigran Bagdasaryan noted that intermediary cities have a set of tools that translate into successful practices and unique deliberative mechanisms. They are therefore better places to develop PB and democratic innovation.

3. Finally, participants were asked to explain the extent to which PBs have been successful in addressing climate challenges in their intermediary cities.

Diego Cuesy found that the PB can move governments towards what they are supposed to do. Policies can be inspired from the neighbourhood to the city!

Gisele Barbosa found that nature conservation is becoming a priority for the PB.

Tigran Bagdasaryan said that they are working on PB practices such as waste management, fish farming, cultural and environmental projects. He also said that public-private partnerships should not substitute for regular government programmes on climate change. Developing BPs should consider implementing green mechanisms in existing BP practices.

Read more about the session this document.

High-Level Dialogue for the Human Dimension of the Transformation

During this high-level dialogue it was postulated that Intermediary Cities are a significant place to promote the human dimension of transformation. Intermediary Cities are a place to rethink the role of citizenship, and a driving force for the transformation of the city. They are schools of democracy in the intersection between the rural and the urban.

Proactive citizenship is the key to building creative, resilient and safe cities. Intermediary Cities can and should promote community action through educational, cultural and participatory policies. They must work with civil society, opening up spaces for dialogue and co-creation.

It is necessary to bring public administration closer to the citizens, either by creating proximity networks and investing in full citizenship, peace resilience, or by empowering our citizens to participate without depending on others. Particular attention should also be paid to the needs of young people, women, migrant residents and residents at risk of vulnerability, who tend to participate less in the political process. Participatory planning is also a way of rethinking policies and addressing challenges with a bottom-up approach.

Different political leadership intervened and underlined the fundamental key of Intermediary Cities such as proximity to citizens.

José Manuel Ribeiro, Mayor of Valongo stressed that Municipalities, local governments and Intermediary cities being closer to the population play such an important role in facilitating citizen participation and improving democracy.

Gökçe Tuna, Head of Exploration, UNDP described Intermediary cities as the best place to co-create because of their dimension.

Xolani Sotashe, SALGA's Chairperson of Human Settlement Working group affirmed that it is important to work in order to transform these cities that must be made an attractive place for youth people.

Gabriel Jaime Ochoa, Technical Coordinator of the Latinoamerican network of Intermediary Cities of Flacma, and CoSecretary of the Federation of the Free Municipalities of Peru (FEMULP) stressed that all the work and commitment is important but it must be done and thought about for the people: the human dimension must not be forgotten.

Pilar Díaz, Mayor of Espluges de Llobregat and elected delegate for International Relations of the Diputació de Barcelona (provincial government) wanted to stress the importance of actively involving all the talents we have in our cities, it is important to not focus only on the governors, the citizens can give their great contribution.

Berry Vrbanovic, Mayor of Kirtchener and Treasurer of UCLG stated the importance of the intermediary cities' role. They have been on the front line of the COVID problems and have proven themselves to be a fundamental part of the solutions, focusing on Humans and working with regions of smaller and bigger dimensions. 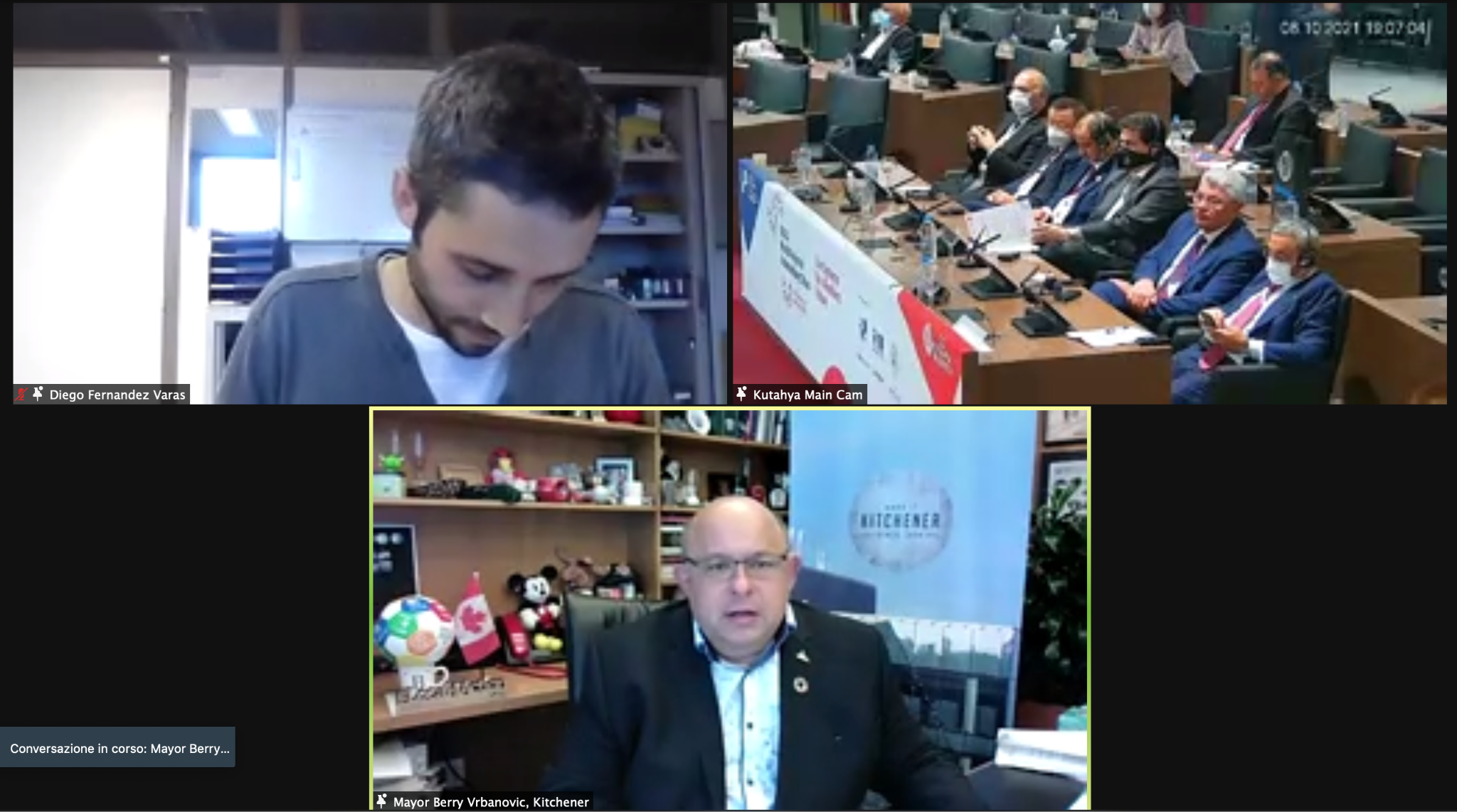 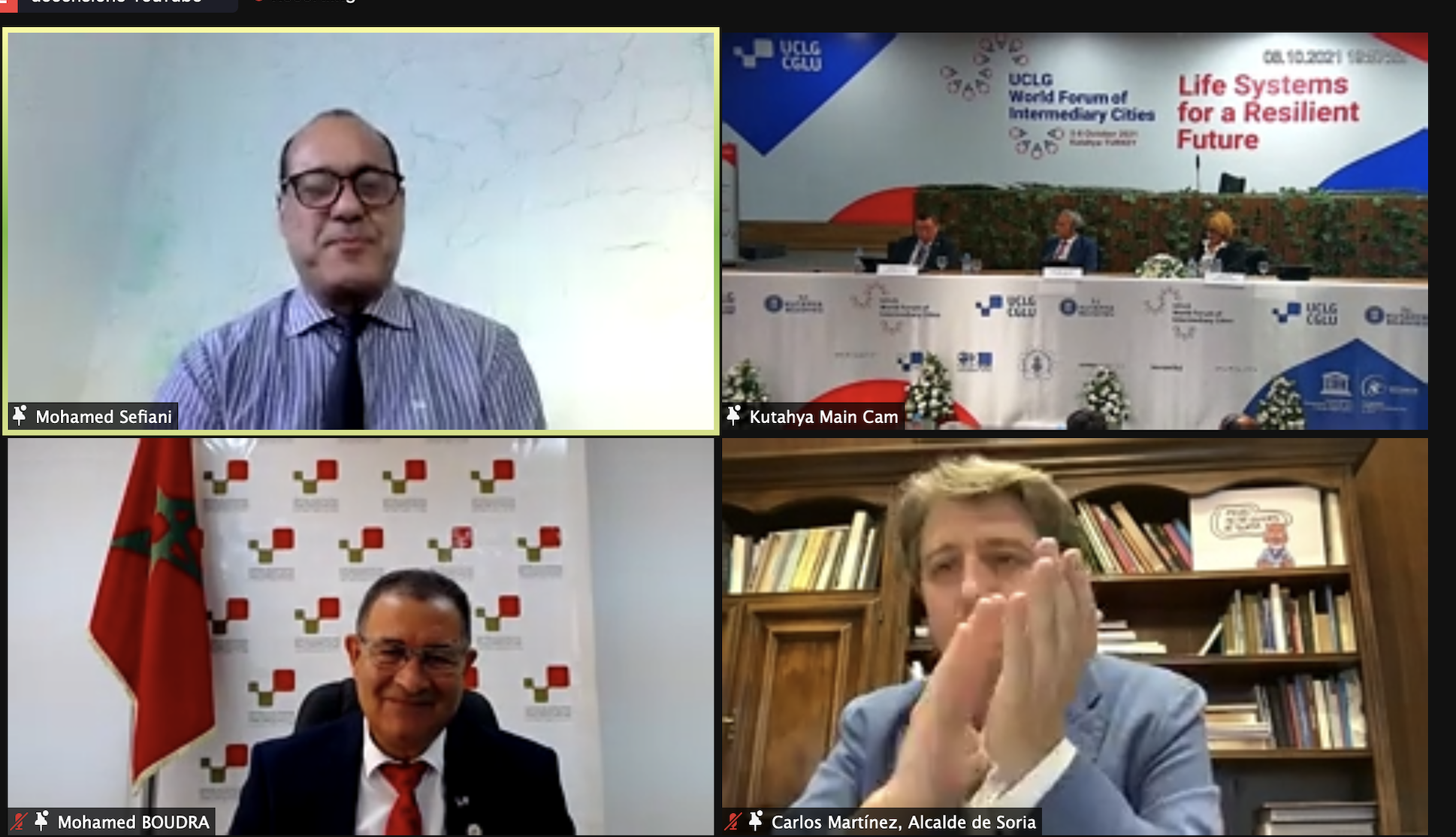 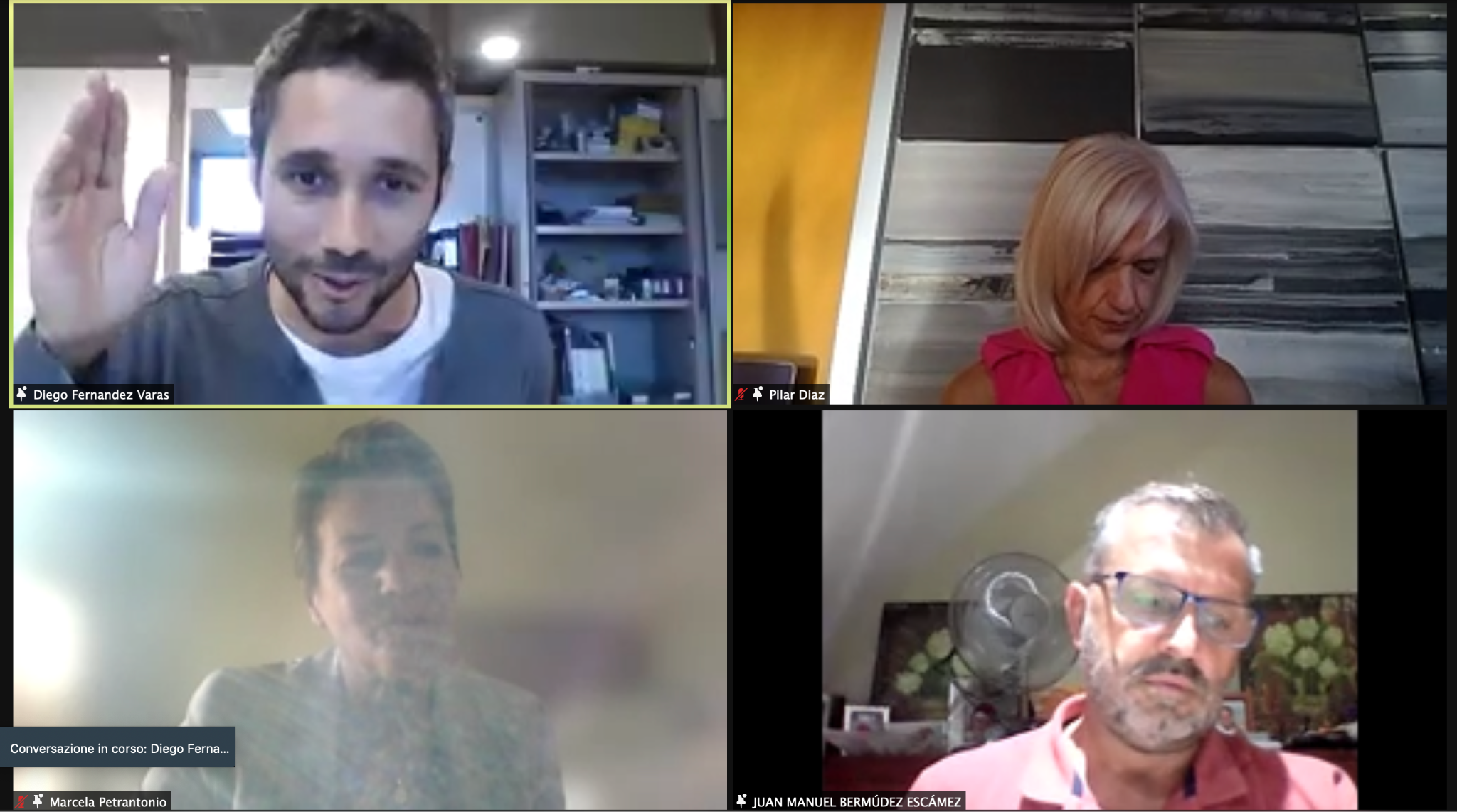 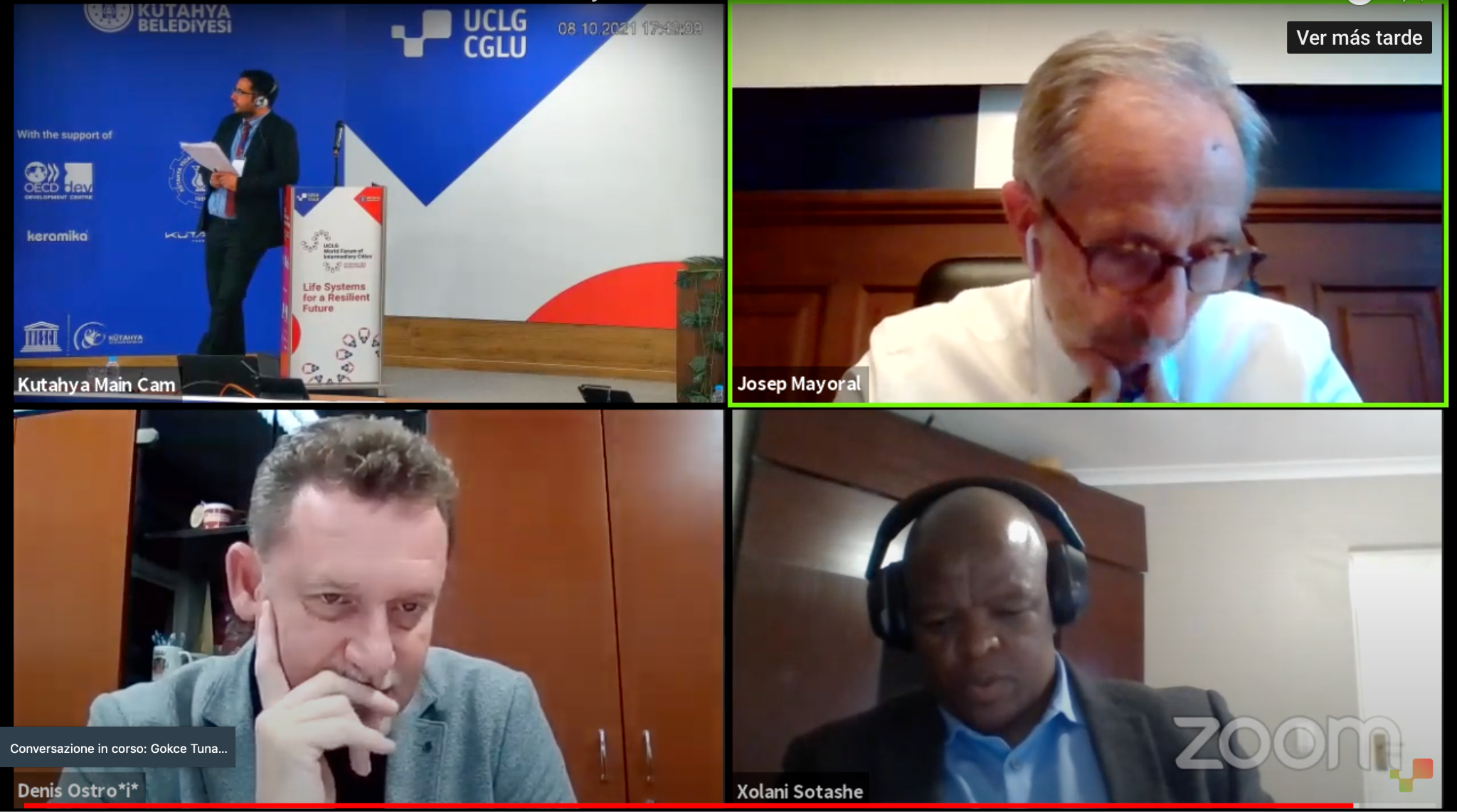 Kutahya Declaration of Intermediary Cities of the World

More information about all the sessions and the interventions here.