The City of Cocody (Abidjan, Ivory Coast) hosted the 20th IOPD conference on 20, 21 and 22 October 2021. The conference will continue in virtual format from 29 November to 2 December.

The opening ceremony took place on Wednesday 20 October with speeches by Patricia Nelly Ouassenan, deputy mayor of Cocody; Tedros Adhanom Ghebreyesus, Director-General of the World Health Organisation (WHO), via video message; Gervais Coulibaly, senior official of Côte d'Ivoire; Claude Paulin Danho, Minister of Sports, Mayor of Attécoubé and President of UVICOCI; Eric Piolle, Mayor of Grenoble; Jean-Marc Yacé, Mayor of Cocody and President of the IOPD; and Diomande Vagondo, Minister of Security and Civil Protection of Ivorian Coast, who formally opened the conference. These speeches defended the importance of self-government and the need for real decentralisation and deconcentration, as well as the promotion of citizen participation.

Video of the opening ceremony

Read the minutes of the opening ceremony 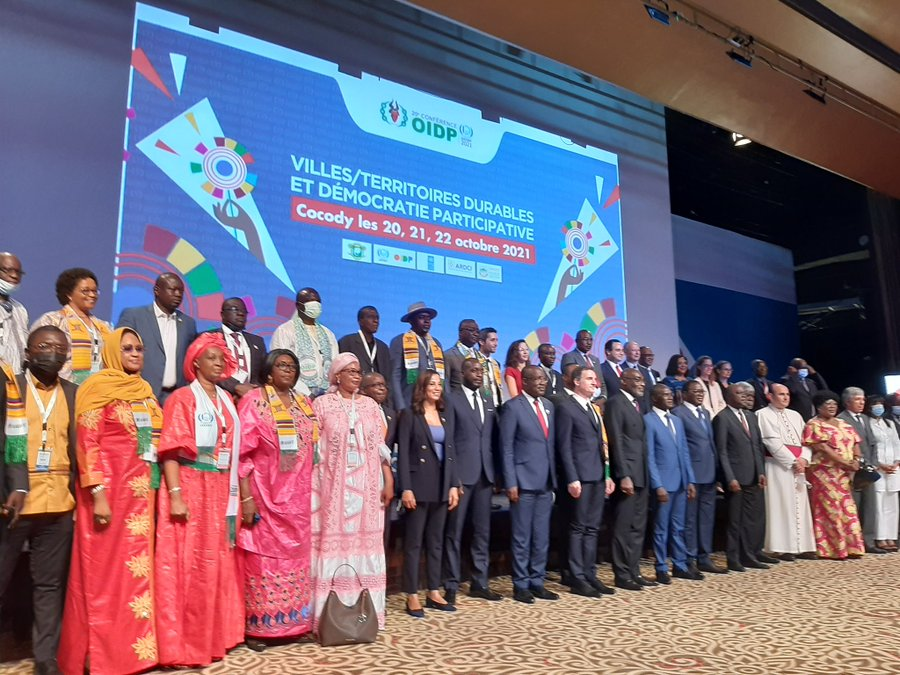 In the afternoon, the four conferences on each thematic axes took place. François Yatta, Director of Programmes, UCLG Africa, held a conference on local economic development, in which he defined the concept as the different territorialised and locally driven development strategies. He also introduced various concrete strategies and challenges with which local and regional governments can promote economic development. His presentation and the following debate focused on the need for national states to transfer the necessary funds and competences to local governments.

Florence N'da Konan, CEO of the organisation Autres Possibles, spoke about the importance and dynamics of citizen participation in ecological transformation and environmental protection. She focused her dissertation on responding to three questions: How can citizen participation in environmental protection be intensified? How can the public participate in technical management? How can we involve all citizens? N'da Konan argued that in the defence of the environment and the fight against the consequences of climate change, all citizen action and involvement, however small, is necessary and valuable.

Giovanni Allegretti, architect, urban planner and senior researcher at the Centre for Social Studies of the University of Coimbra gave a lecture on the concept of the Right to the City. His lecture focused on the origin, definition and implication of the concept of the "Right to the City", which was born from philosophy and not from the legal sphere in different societies. He started from the idea that territories are the product of a permanent social conflict that changes form but is always present. For him, the right to the city is an interesting framework for understanding and promoting citizen participation.

Presentation of Giovanni Allegretti on the Right to the City

On Thursday 21st, eight panel discussions took place where the four thematic axes were examined in depth. All sessions had a large involvement of the participants and intense discussions with participants.

Impact of Covid-19 Pandemic on the organisation of Urban Transportation

Impact of Covid on the organisation of Business activities in the metropolitan area.

Axis 3: Right to the City

The problem of access to housing, health and education in urban areas: the persistence of pockets of vulnerability

Inclusive city, realities in the days of Covid-19

Finally, on Friday 22 October, the closing ceremony took place. During the session the president of the scientific committee, Valéry Loba, presented the summary of the conclusions of all the different sessions. This was followed by speeches by Bachir Kanouté, coordinator of IOPD Africa, Diego Fernandez, director of local democracy in Grenoble in representation of the 2022 presidency, and Jean Marc Yacé, mayor of Cocody and president of the IOPD. After a performance of regional dances and music, Claude Paulin Danho, Minister of Sports and President of UVICOCI formally closed the IOPD conference. In the evening, the organization offered a gala dinner with various musical and cultural performances from the host country.

There were also moments of informal exchanges, interviews, cultural visits and meetings between the international participants and the ivorian participants. The IOPD family will undoubtedly remember this conference held in Abidjan, the second in an African country after the 2016 conference held in Matola, Mozambique. The IOPD technical secretariat is very grateful for all the work and the warm welcome offered by the Ivorian authorities and especially to the team of the Municipality of Cocody.

The 2021 conference will continue in virtual format on 29/30 November and 1-2 December, and Grenoble takes up the challenge of organising the next conference, scheduled for 7-10 December 2022.