The permanent Agora project has for priority the inclusion of all the inhabitants and users of the city (100,000 jobs and 30,000 students), around a perennial consultation platform http://participez.nanterre.fr. It is an online space of convergence of citizen's dialogue. It allows to receive individual and collective contributions (apartment meetings, groups of inhabitants, workshops in social centers) published by a spokesperson. There is no need to have an internet connection, nor a mastery of digital uses.

The permanent Agora project has as a priority the inclusion of all inhabitants and users of the city (100 000 jobs and 30 000 students), around a platform of permanent consultation http://participez.nanterre.fr. It is an online space of convergence of citizen's propositions. It allows to receive individual and collective contributions (meetings of apartments, collectives of inhabitants, workshops in social centers) published by a spokesman. No need to have an internet connection, nor a mastery of digital uses.

Beyond the local context, one of the main objectives is to contribute to the launching of a movement of solidarity between local governments by creating digital common goods, by designing open source tools whose evolutions contributed by each benefit the community. Control can also be carried out by citizens.

- gather the opinion of the inhabitants on the projects of the city (town planning, public policies ...)

- allow the follow-up of decisions and the arrest of the administration and elected representatives at all stages of the implementation of the projects.

- converge the collected propositions to make them visible.

- innovate, combining digital tools and physical appointments to allow the participation of the greatest number. 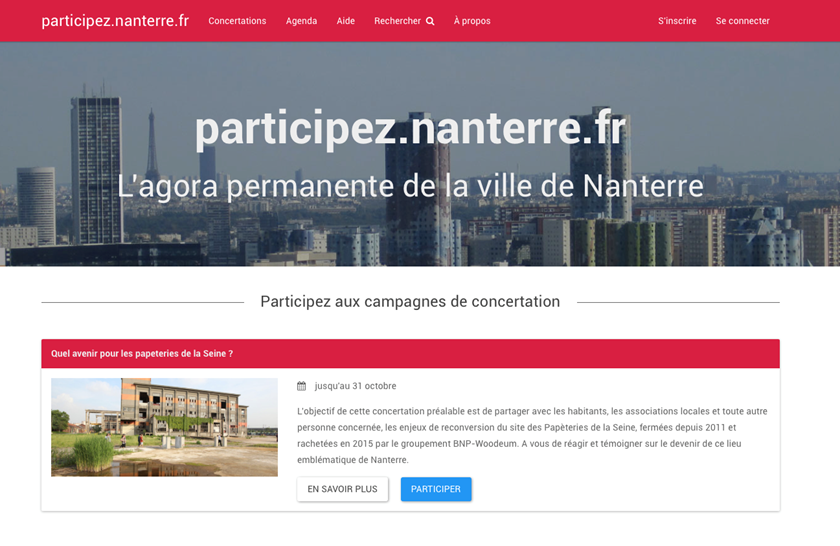 The "permanent agora" system allows the launching of one-off consultation campaigns based on a platform of consultation http://participez.nanterre.fr  hybrid with the face-to-face consultation tools.

Each campaign on the platform is associated with a chronological frieze (TimeLineJS) allowing following the past and future stages of the project, the expected debate times. Each debate is associated with a collective intelligence space based on DemocracyOS technology, a consensus building tool. The modalities of the concertation are announced from the outset.

Citizens have the opportunity to propose contributory workshops in their association, building, school, company in a geolocalized shared agenda.

Each the campaign's page is also associated with resources for a better understanding of the consultation (explanatory file, press articles, council debates, resource sheets etc.), communication and participation kits to organize a debate at home (Inspired by the consultation tools of the French National Digital Council), as well as podcasts of Radio Agora (http://www.radioagora-nenterre.fr), the wikiradio of the citizens, in connection with the concertation.

The specifications that led to the collaborative design of this platform were established following a multi-month open innovation process, culminating in a two-day hackathon in partnership with the French National Digital Council and the association DemocracyOS France. This was held on 16 and 17 October 2015, during the Nanterre Digital Festival, as part of the Public Innovation Week organized by the General Secretariat for Modernization of the Public Service (Prime Minister's Office). The first day brought together some sixty citizens, public officials from different branches of the city, elected officials and developers. Spread out in different thematic workshops, they made it possible to identify the priority axes of the project. The evening and the second day were devoted to the development of solutions, which allowed to prefigure the first bricks of the platform. It was notably during the hackathon that the TimelineJS technology was identified to allow the follow-up of the projects, to expose in the time the rules of the concertation in a clear way.

A jury of elected officials and citizens then awarded the best projects. About fifteen master students from the University of Paris-Nanterre were present throughout the event to document the work.

At the end of this highlight, the platform was developed by the association DemocracyOS France.

To preserve the open character of public policy design, a working group with the agents of the Quartir de Parc (a Nanterre's neighborhood) Mission accompanied this phase of the project (in the context of the complements to the project of the National Urban Renewal Agency). Workshops were regularly organized to confront the project with the realities of the ground and the needs of the inhabitants.

The platform was thus launched on 7 March 2016, on the occasion of the Assises pour la Ville (a large participatory process on the future of our municipality). Since then, 6 consultation campaigns have been organized on the platform between March and October 2016:

- A consultation about the High-speed fiber on the city, with an interest survey for the connection, a module of collaborative mapping was activated on this occasion (in progress)

- The concertation on the future of the 11th district of Nanterre: Les Groues 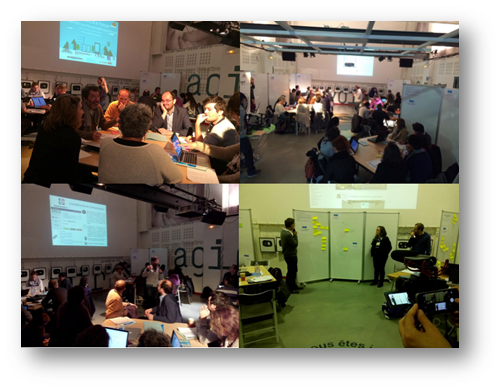 The agora model can prove to be a fruitful way to engage citizens efficiently.