To improve the quality of public decisions through mechanisms of participatory democracy.

In the Honorable Deliberative Council of Godoy Cruz, the objective has been achieved through the implementation and institutionalization of Legislative Volunteers as a pedagogical body for the formulation of public policies.

In the Legislative Volunteer Program, citizens learn to interpret public policies as a process of social satisfaction; they associate the 2030 Agenda of Sustainable Development Goals with the public problems identified. They also implement methods and tools for the diagnosis, decision making, direction and dissemination of public policies.

In this way, the participants not only establish a constructive and proactive link with the State, but also acquire knowledge that makes possible a participatory democracy that is sustainable over time and can be monitored by its own protagonists by understanding how and in what way public activity is developed.

Of the total number of citizen proposals channelled through the Legislative Volunteer Program, 40% are already public policies approved and implemented in the territory, which means a good level of effectiveness of the public management democratisation body.

Volunteer management requires a skill that the Legislative Volunteers have been able to share with other interested parties.

Partnerships have also been established with social organizations (such as chambers of commerce and solidarity organizations) and academic organisations (universities and technical training areas of the National State) with which there is interaction during the public policymaking process for the incorporation of sectoral and specialized views on the problems being addressed.

With regard to the articulation of the experience with other processes, it is valuable to note that not all legislative institutions have the authority to present legislative initiatives by citizens. Sometimes, it is a requirement that such initiative be presented by a legislator. In the case of Godoy Cruz, the citizens' initiatives are legal, but their visibility is close to zero. The volunteering programme has significantly increased the indexes of presentation of legislative initiatives of citizen authorship. 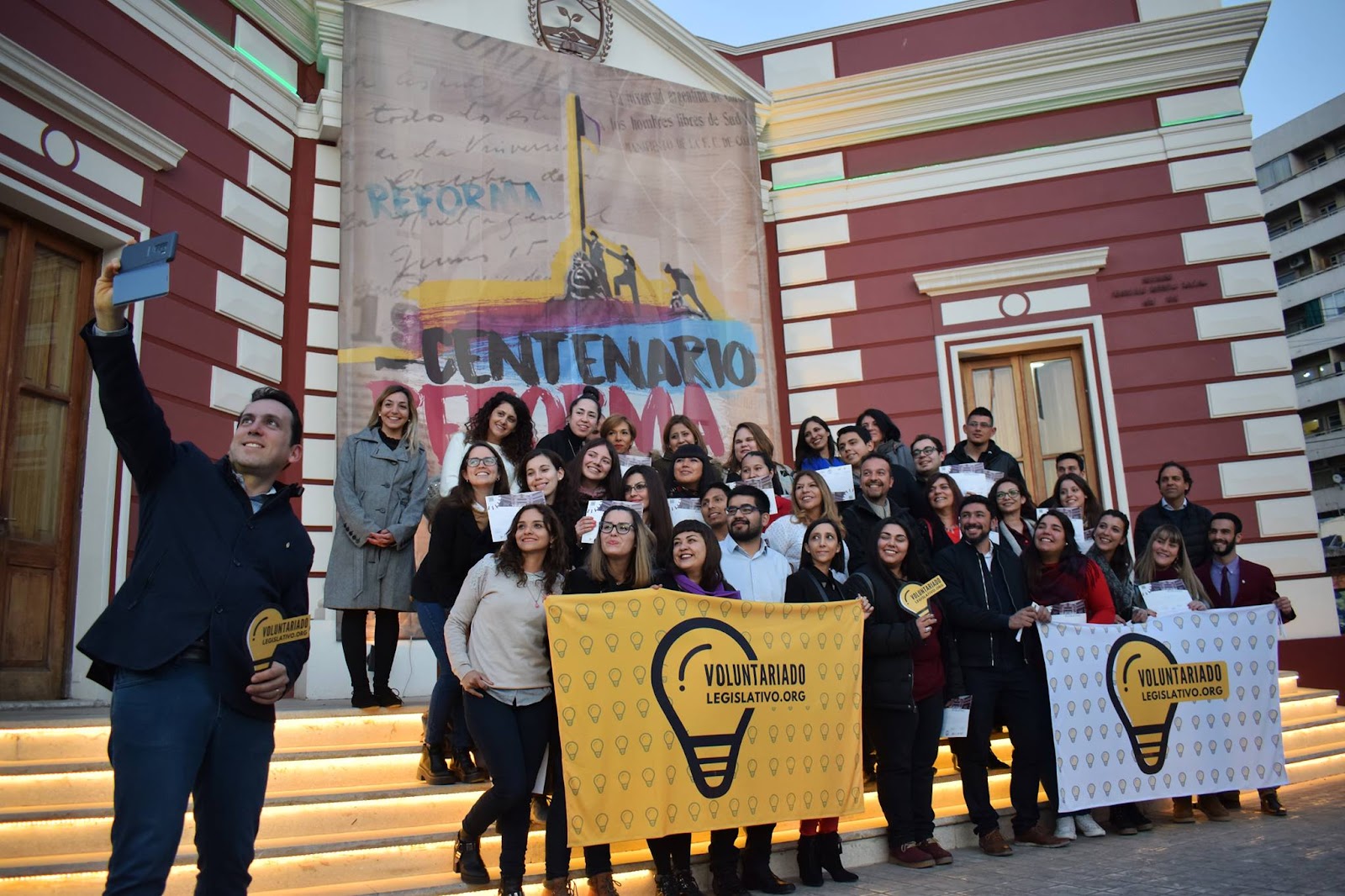 In the four-year volunteering experience in Godoy Cruz, the level of co-responsibility has  gradually increased.

Initially, only citizens accompanied by teachers and tutors participated in the design of public policies, with little commitment on the part of the ruling legislators to the participatory process. Currently, the participation of legislators has increased notably, involving both government and opposition members from the first phase of the Volunteer Program until the approval of legislative proposals, which are valued positively because they know their origin and construction.

On the other hand, the interaction between the Legislative and the Executive Branches has also increased. Initially, the projects that emerged from the Volunteer Program were studied and approved without requiring an opinion of feasibility and viability from the Executive Branch. Currently, all projects are optimized in a first phase with the direct interaction between volunteers and public operators that in the future could implement public policy and, in the study phase in a legislative committee (composed exclusively of legislators), a formal opinion is incorporated by the Executive Branch regarding the feasibility and viability of the initiative.

This way, the teaching-learning process is bidirectional, strengthening the knowledge of participants as well as the knowledge of those who exercise a public role (both in the Legislative and the Executive Branches) since they incorporate methodological mechanisms for the design of participatory public policies.

The innovative aspect of the experience is that it gives added value to public work, breaking down barriers, myths and beliefs that prevented direct citizen participation in the public decision-making process.

The politicisation of citizens (through popular education and access to public policy design tools), is the key element that makes "the citizen's voice" to be considered by public decision makers. From the Legislative Volunteering, well-founded proposals arise, built from a methodical process that ensures the visibility of social needs and public problems with certainty.

The procedure for carrying out Legislative Volunteering is 100% transferable. A road map describes each of the moments for the development of the experience, as well as mentioning the essential elements necessary for its execution.

The cost of the experience is very low, which makes it even more feasible to be adapted by any type of legislative institution willing to be democratized on the basis of direct citizen participation.

The experience is feasible due to its low cost, which means that it can be carried out by the same personnel of the state institution without the need to generate extraordinary expenditures. Volunteering is free of charge for the participant.

Furthermore, by relying on a popular education pedagogy, the restrictions on participation are considerably reduced as everyone can access it without having to prove previous knowledge. All the theoretical and practical inputs are provided during the volunteering stage, and these elements are mediated through tutors who make it possible to attend to learning difficulties in a personalised way. 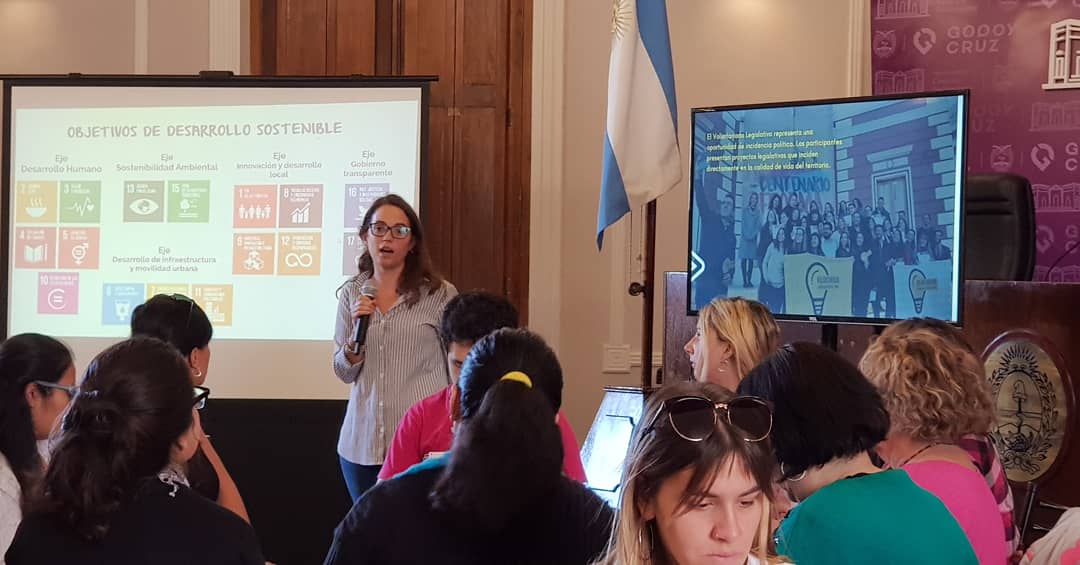 The results of the evaluations and characteristics are spread on social media and the Legislative Volunteering website in addition to maintaining fluid communication with the volunteers, even after the participation experience has ended, so that they are aware of the status of their legislative initiative.

Since the beginning of the Legislative Volunteering programme in Godoy Cruz, the interest of citizens in the activity has been exponentially increasing. This interest is measured by online registrations: in 2016, 175 people registered; in 2019, 265 people registered, an increase of 51%.

In the period 2015 - 2019, 172 people have successfully completed the process of citizen participation, certifying as legislative volunteers within the framework of Municipal Ordinance No. 6591 and National Law No. 26,855.

In the same period, 43 public policies have been designed and presented for study and subsequent legislative vote. As of April 2019, 17 proposals have been approved and implemented in the territory; only 4 proposals have been rejected. The rest of the proposals are still being studied by the legislators.

Of the 43 public policies designed in Godoy Cruz, 34.9% are associated with the Prosperity Axis of the 2030 Agenda to ensure that all human beings can enjoy a prosperous and fulfilled life, and that economic, social and technological progress occurs in harmony with nature; followed by 25.6% of the projects associated with the Planet Axis to protect the planet from degradation, including sustainable consumption and production, sustainable management of natural resources and urgent action to address climate change, so that the needs of present and future generations can be met; 20.9% to the Peace Focus to foster peaceful, fair and inclusive societies, free from fear and violence; and finally 18.6% to the People Axis, to end poverty and hunger in all their forms and dimensions, and to ensure that all human beings can realise their potential with dignity and equality and in a healthy environment.

Finally, Legislative Volunteering contributes to the improvement of the city's public transparency indexes. In October 2019, the Institute of Studies on Argentina and Latin American Reality of the Mediterranean Foundation recognized in a report the Municipality of Godoy Cruz as the most transparent locality at the institutional level above the Autonomous City of Buenos Aires, the City of Cordoba and the City of Mar del Plata. Among the aspects evaluated, the legitimate mechanisms of citizen participation are considered, among them the Legislative Volunteers.

Volunteering is an outstanding experience by the International Association of Educating Cities; and it has been declared of interest on several occasions by the Legislature.

A very enriching experience which seems to be able to spread to the different areas of local public policy if the legislative and regulatory framework allows it at the outset — which might limits transferability outside the local context. Fascinating. Thank you for this beautiful project.