With the aim of expanding citizens' rights related to political participation, the Rafelbunyol Town Council carried out a participatory process focused on determining the official name of the Public Nursery and Primary School No. 2, which opened its doors in September 2019 without an official name.

Usually, it is the Public Administrations or School Boards who establish this denomination, but under the mentioned objective, and in order to improve the quality of the public decisions through mechanisms of participative democracy, the city council delegated the adoption of this decision to the citizens, specifically to the educational community of school nº2, and especially to its students, the real protagonists of the educational centre, which also allowed to promote the active citizen involvement in the public decisions from early ages and to promote the citizen empowerment among children.

The participatory process was therefore structured in two phases: Firstly, the School Board, in which the school's management and teaching staff, the students' families and the Town Council are represented, selected and approved four proposals for the name of the school; and secondly, a democratic voting exercise was carried out on these four proposals, by means of which the students, aged between 3 and 12, decided on the name of their school.

In order to guarantee the effectiveness and efficiency of this mechanism of participatory democracy and to achieve greater levels of equality when it comes to participation, the voting process was adapted according to the age of the students, so that the Primary Education student, aged between 7 and 12, voted by selecting the proposal of the name chosen on a ballot paper and placing it in a box, while the Infant Education student, aged between 3 and 6, voted by placing themselves under the poster representing the proposal of their preferred name. In addition, with this same purpose, prior to the vote, an informative exercise was carried out for the students, through which they were given pamphlets with the description and image of the proposed names and the reason for their relevance, and the participatory process and how to participate was explained to them.

Likewise, in order to continue promoting the practice of democratic practices at an early age, the voting day was energized not only by the City Council staff but also by the school students belonging to the Local Council for Childhood and Adolescence of Rafelbunyol (CLIA).

The objective was achieved in its entirety, while the decision to determine the official name of the school was made by all the agents involved: the School Board, in which the management and teachers of the school, the families of the students and the Town Hall are represented, and the 372 students of the 403 enrolled in the school in question, that is, 92.3% of the total students.

Furthermore, the fulfilment of the objective is confirmed insofar as the adoption of the name of the centre through this participative process was ratified by the Municipal School Board of Rafelbunyol, submitting it to the Regional Ministry of Education, the competent territorial body for granting the specific name of the newly created public education centres, which approved the name.

The design of the experience was articulated through different actors, such as the Rafelbunyol City Council and Open Government Councillor, the Councillor for Education, Children and Adolescents, the municipal officer of citizen participation and the management of the school, which contributed to the generation of a successful project thanks to the synergies derived from the political vision in public governance, the technical perspective in citizen participation, knowledge of the students and the operation of educational centres.

In addition, the project was also successfully articulated together with the School Board. Similarly, the dynamisation of the voting process was also articulated with the aforementioned actors but also with the Parents' Association of the school and with the Local Council for Childhood and Adolescence, while the school's students participated in the experience through their votes.

On the other hand, this experience was articulated with pre-existing participatory processes and actions in the municipality, such as the recent implementation of participatory budgets or the constitution of the CLIA, which also contributed to its success given the generalised predisposition among citizens to participate in public affairs.

The experience involved different actors who assumed the following roles:

- CLIA also intervened through three of its members, who assumed the role of facilitators during the voting process and collaborated in the counting of votes, being also in charge of communicating the final result to the rest of the students.

- Finally, the students took on the role of main participants in the process, as they were the ones who bore the brunt of this transfer of decision-making power.

Childhood is a primordial stage in social learning, so the socio-cultural impact that the implementation of this practice has caused among the child population is also an innovative element, thus strengthening citizen empowerment from an early age and generating a culture of participatory governance among children.

In the same way, this experience supposes an innovative means of pedagogy and initiation in the exercise of democratic practices at early ages, emphasizing the adaptation of the practice of the referendum to the particular context of this group, which is also an innovative element of the experience. In this sense, before the vote, informative pamphlets designed under a friendly and visual perspective adapted to children were distributed among the students (document attached, PDF), and the teaching staff was in charge of explaining them the proposals of denomination and how to participate in the vote, transmitting the importance of it. Furthermore, as mentioned in the previous section, the voting process was also adapted according to the age of the students, and the ballots and posters that allowed the voting were also designed to facilitate their understanding by the children's group (PDF document).

Another innovative element of the experience was the participation of CLIA in the voting day, explaining how to vote and solving the doubts of the rest of the students, organizing the voting, as well as in the counting of votes.

The high degree of transferability of this practice lies in the fact that all the elements that make it up are replicable: the transfer of real decision-making power to the child population, the fact that this transfer is successfully carried out if a methodological process is designed in a way that, as in our case, takes into account the group to which it is addressed, and adapts the phases and mechanisms of participation according to the profile of the participants, so that it is easy for them to participate. In this sense, when this participative process was designed, the decision of the first election of 4 proposals of the name of the centre, given its greater complexity, was given to the School Board, made up of adults, while the voting for the final election, a simpler act, was carried out by the students, also adapting the voting mechanism itself according to their age and using material that can be understood by the children's group.

Likewise, the information and communication elements that were carried out to improve the understanding of the process and guarantee that its effectiveness and efficiency can be replicated, such as the delivery of an information document to the School Board (PDF document), and an information note to the families of the students (PDF document), as well as the distribution to students of an explanatory leaflet of the proposals of denomination, with a design and language adapted to the children's group (see document), and the explanation by the teaching staff of both the proposals of denomination and the mechanics of voting.

Finally, other institutions can access information about this experience through the Open Government Portal of Rafelbunyol Town Council, which is an element of accountability that can also be replicated. 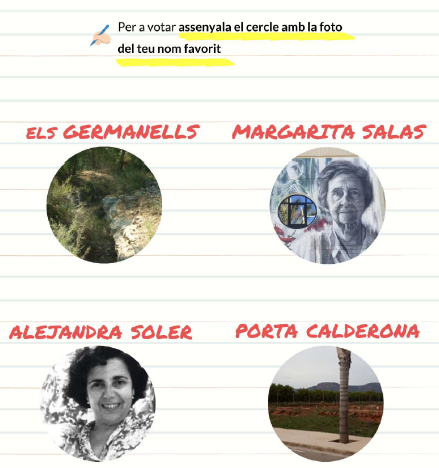 From the beginning, this experience was designed taking into account the context in which it was to be applied, which allowed it to be developed successfully.

Therefore, in relation to the socio-political context, the will of Rafelbunyol Town Council to make citizen participation a transversal aspect of its management was taken into account, as well as the intention of granting children a special role in it. Regarding the context, the existence of a generalised predisposition among citizens to participate in public affairs was also considered, motivated by participatory processes and actions which had been carried out previously, such as the recent implementation of participatory budgets in the municipality or the constitution of the Local Council for Children and Adolescents. Therefore, this was decided to be the ideal moment to implement this experience successfully.

As for the organisational context, although the project began to be designed in September 2019, when the school opened its doors for the first time, it was decided that it would be more appropriate to start implementing it in December, when the School Board was constituted, and thus being able to count on the participation of the entire educational community. In the same way, it was established that the vote of the students would take place in January, so that it would not coincide with their absence from the school on the occasion of the Christmas holidays.

With regard to the technical context, the profile and skills of the participating agents were taken into account and, as has been pointed out, the process removed complexity, applying measures that allowed for the effective participation of each one of the agents, specifically adapting the phases and mechanisms of participation and carrying out information and communication actions, as well as preparing material that could be understood by the children's group.

Finally, the economic context was also taken into account, and measures were applied that allowed their implementation to be carried out at a reduced cost, such as the use of a ballot box that the city council already had to carry out the voting process for Primary Education students, or the use of the same posters for the voting process for the Nursery Education students.

The evaluation of the procedure and its results was in charge of the city council's officer of citizen participation, and was carried out taking into account the level of participation of both the School Board (which did so effectively by selecting and approving the 4 proposals for names) and the students, which registered a participation of 92.3% of the total number of students, calculated thanks to the registration of the number of voters by the CLIA. The fact that the decision resulting from the participatory process has already been formally adopted was also taken into account to evaluate the effectiveness of the experience.

With regard to accountability and the dissemination of information, a record of the voting day was drawn up (PDF document) and provided to the Municipal School Board for ratification of the decision taken on the basis of the results obtained. In addition, a press release was prepared to inform citizens of the process and results and a video summary was published in the institutional media. This information was posted on the Open Government Portal of Rafelbunyol Town Council for anyone to access.

By its nature, this type and participation has a pedagogical effect, in addition to fostering private spheres of discussion, so the innovative effect is inclusion and encouragement for child participation. I suggest that some element of impact be created within the school, to continue promoting child participation, like a student union.