The health crisis has shaken up everyone's daily life and has had multiple consequences, especially on the decisions taken on the metropolitan territory. During the second lockdown period, which was very strict in France, Nantes Métropole organised this time of remote consultation with citizens and experts from the territory to produce a citizen diagnosis and aspirations for the post-crisis period.

The main objective of the initiative was to establish a citizen's diagnosis and recommendations on the Covid-19 health crisis at the local level and to make recommendations to elected officials.

The mission was to draw up a citizen's opinion including :

In order to draw up a complete diagnosis, the members had the opportunity to hear the experts of the territory.

The members of the Convention were selected from among the people interviewed during the survey conducted by the TMO Régions polling institute on the health crisis, with one objective: to be as close as possible to the sociology of 80 people living in Nantes. 80 people from all over the metropolitan area were chosen at random from the major research project , which was then completed by fieldwork: for 100 days, the members shared their experiences of the crisis and formulated their aspirations for change for the city and society. They met four times from 23 November 2020 to 18 February 2021 in working sessions via videoconference. The convention met with 51 national and international speakers to understand the crisis and its implications. The 80 stakeholders debated and confronted their points of view under the control of 4 guarantors in charge of ensuring the interdependence of their work. They met in the form of a Citizens' Convention to conduct the debates. Together, they formed a varied group in terms of gender, age, place of residence and socio-professional category. These people were randomly selected from among the 2,301 people questioned for the major research project that took place from 10 to 23 September. In addition, field recruitment was carried out to find people from the whole territory and neighbouring areas. Nantes Métropole did not want direct the discussions: the citizens of the convention have been entirely free to choose the subjects they wanted to discuss about the crisis. At the end of the first containment period, Nantes Métropole wanted to hear from the citizens of the 24 municipalities that make up the metropolitan area about their experience of the crisis. Since March 2020, the Covid-19 pandemic has disrupted everyone's lives. This crisis had important consequences for political decisions. In order to ensure that these decisions are as close as possible to the concerns of the territory's inhabitants in all their diversity, Nantes Métropole has launched this new type of citizens' initiative. This was done by trying to understand the changes in the metropolitan area since the beginning of the crisis and by listening to the voice of the inhabitants and experts. In September 2020, TMO Régions was asked to conduct a major metropolitan survey of 2,301 inhabitants. This first exercise enabled the identification of major trends in terms of consumption, work, travel, housing and civic engagement. At the same time, the local authority began a forward-looking documentary watch on the containment and discourse around post-crisis worlds, which was presented at the start of the convention.

The convention then sought to deepen this first panorama proposed by the major metropolitan survey. It was a time of concentration that allowed people to step back from the events that confronted their experiences and feelings.

The process was carried out in two stages: in the first stage, the 80 participants shared their experiences of the crisis, which varied according to their personal and professional situations. This citizen diagnosis highlighted an increase in inequalities, a change in the relationship to work, concerns about the fragility of the health system, a need for solidarity, changes in consumer habits and greater difficulty in accepting national decisions. In a second phase, the Convention proposed aspirations for tomorrow for a more united metropolitan area, one that creates new ways of living in the territory, that informs and protects its inhabitants, and that encourages transitions.

In the framework of the telephone survey carried out by the TMO Regions institute, the 2,300 people making up the representative sample of the metropolitan population answered 50 questions on the impact of the crisis on their lives and their aspirations for the future. The results will be known later, but the survey will allow certain categories to emerge, such as self-employed people, who rarely appear in national surveys. The size of the sample will enable diversity to be represented (80% of the people contacted had never responded to a survey or taken part in a debate, these are people who would not have come on their own and this approach gives them the opportunity to participate).

The sample of 80 people, representative of the inhabitants of Nantes Métropole, was composed of 35 inhabitants of the 11 districts of Nantes, 35 inhabitants of the 23 other municipalities of the metropolitan area and 10 inhabitants of neighbouring territories. They took part in 4 sessions of 1.5 to 2 days in different places in the area, between November 2020 and February 2021. They met with between 35 and 70 experts and actors from the territory to build their diagnosis. Four guarantors were appointed to ensure the independence of the work of this Citizens' Convention. All power was given to them to carry out the exploration and to meet the actors of the territory in order to feed their own opinion.

The local authority's administration first carried out a great deal of work in April. Based on the opinions expressed by the citizens, it analysed all the proposals and divided them according to themes: mobility, environment, social action, economic development. The proposals were also identified according to the competences of the local authorities: the communes and the Nantes Métropole but also the levels of the Department, the Region or the State. As a result, large tables are essential for analysing the entire citizen opinion and responding in a precise manner.

The workshops on 6 and 7 May launched the actual investigation by the elected representatives, the analysis of the citizens' proposals and the proposal of responses by the community. Meeting by videoconference, the elected representatives were offered the same collective working conditions as the citizens: 3 hours of exchange alternating between sub-groups and plenary sessions. They were able to compare their feelings on this opinion and to draw up the first possible courses of action. The municipalities and elected representatives of the metropolitan area, in conjunction with the departments, then had the month of May to submit their proposals and remarks. Based on all this feedback, a "version 0" of the citizen's opinion was submitted for discussion to the "citizen's convention" steering committee which was held at the beginning of June.

The month of June was devoted to political debates to finalise the response.

The vice-presidents of Nantes Métropole are working on this, as are all the mayors who met at a conference in mid-June. The response will focus on some initial actions to be implemented from 2021/2022. They will also propose to the citizens that they work together on less mature subjects. Citizens' questions that do not fall within the competence of the local authority will be relayed to the relevant bodies at the appropriate level. Finally, the Metropolitan area will propose a right of follow-up so that everyone can follow the implementation of the commitments made.

After 100 days of instruction, citizens will discover on 7 July the response of elected representatives to their debates. For the first time, they should be physically reunited, after months of video-conference exchanges!

With this convention, we wanted to go beyond the simple addition of individual points of view," insists Johanna Rolland, mayor of Nantes. ''We want to identify the lines of force, but also what is being debated between citizens, because that is what respect for the diversity of points of view is all about!" 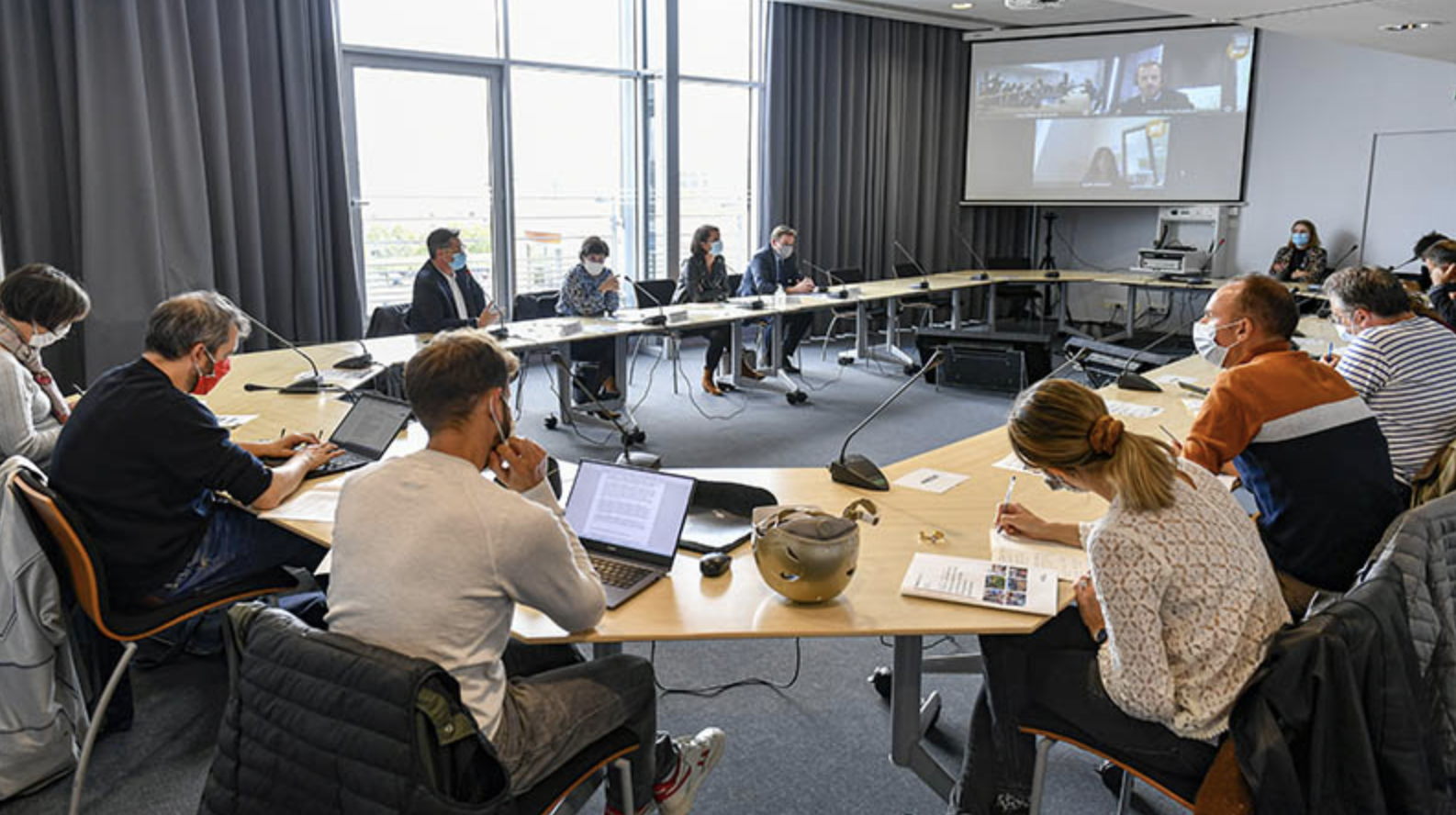 The Citizen's Opinion of the Nantes Convention

Members of the Convention