The main goal is to increase the quality of public decision-making and ensure participation planning through participatory democracy mechanisms. In other words, it is to give the local people the right to express themselves, to define the problems of the neighbourhoods they live in and to participate actively in the interventions to be made in the city. It is aimed to reveal the socio-demographic, cultural, economic and physical problems determined with the participation of citizens and the factors that cause these problems in a cause-effect relationship, and to adapt the projects to the city by establishing the relationship of the projects with the space for these problems.

By using face-to-face questionnaires with a total of 1932 households, 379 businesses, 390 local visitors and 385 foreign visitors, it was ensured that the projects were used at different stages of the project, to establish the relationship of the projects with the space, to develop the proposals and to create the inputs for the project prioritization to guide the implementation.

In the first phase of the project, which was set out to produce, the Logical Framework Approach, which is widely used in project development, was used in order to define the problems related to Fatih district and the project proposals related to these problems in a hierarchical structure with the data obtained from various sources. 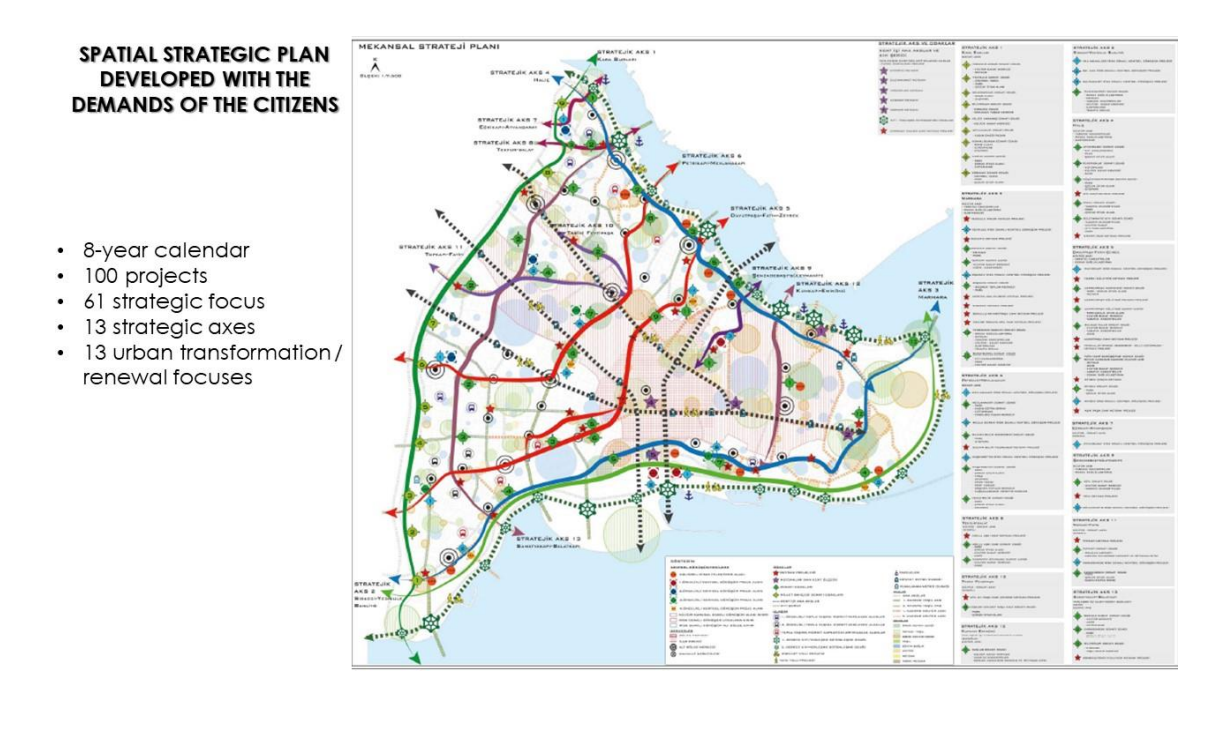 The analysis setup of the project is based on grouping the problems obtained from the literature and citizen participation results under 4 themes. The problems obtained from the literature review conducted for Fatih district, determined by survey studies and compiled from the in-house opinions of Fatih Municipality were first listed in the problem pool. As a result of the examination of the existing problems collected in the problem pool, a simplification was made and the problems observed in Fatih district were grouped on the basis of themes. These main themes have been determined as 'spatial attraction', 'urban collapse, renewal and disaster risk', 'protection and survival of historical and cultural heritage' and 'sustainable urban mobility' respectively, and each theme has been examined within the scope of sub-themes / problems affecting it.

Within the scope of the project, analytical studies conducted on four main themes were evaluated together in order to examine the interactions with each other and to make a multi-criteria evaluation.

In addition, all requests and complaints received from the Fatih Municipality Communication Center "Write to Mayor" platform were included in the process by analysing gender, age and location information, and what kind of expectations different social groups had was examined in depth.

Immediately after the analysis process, in the light of the data obtained with the participation of citizens, synthesis studies were carried out with the aim of providing input at the stage of project proposals.

According to the answers given by the citizens during the synthesis phase, it is in different themes such as satisfaction with the housing environment, workplace problems and satisfaction, social infrastructure areas, use of open public space, neighbourhood-based problems, environmental stress, socio-demographic structure, belonging-loyalty, immigrant perception, perception of urban security. evaluations have been made.

After all these evaluations, spatial project proposals were presented according to the demands, complaints and satisfaction levels of different social groups and the projects were prioritized. In addition, the "Spatial Strategic Plan" was prepared on the scale of the district and the projects of Fatih for the next 8 years were evaluated on 13 strategic axes.

As a result, while planning the future of Fatih, opinions of different actors living, working and visiting here were taken and strategies and projects were developed in line with their needs and expectations. 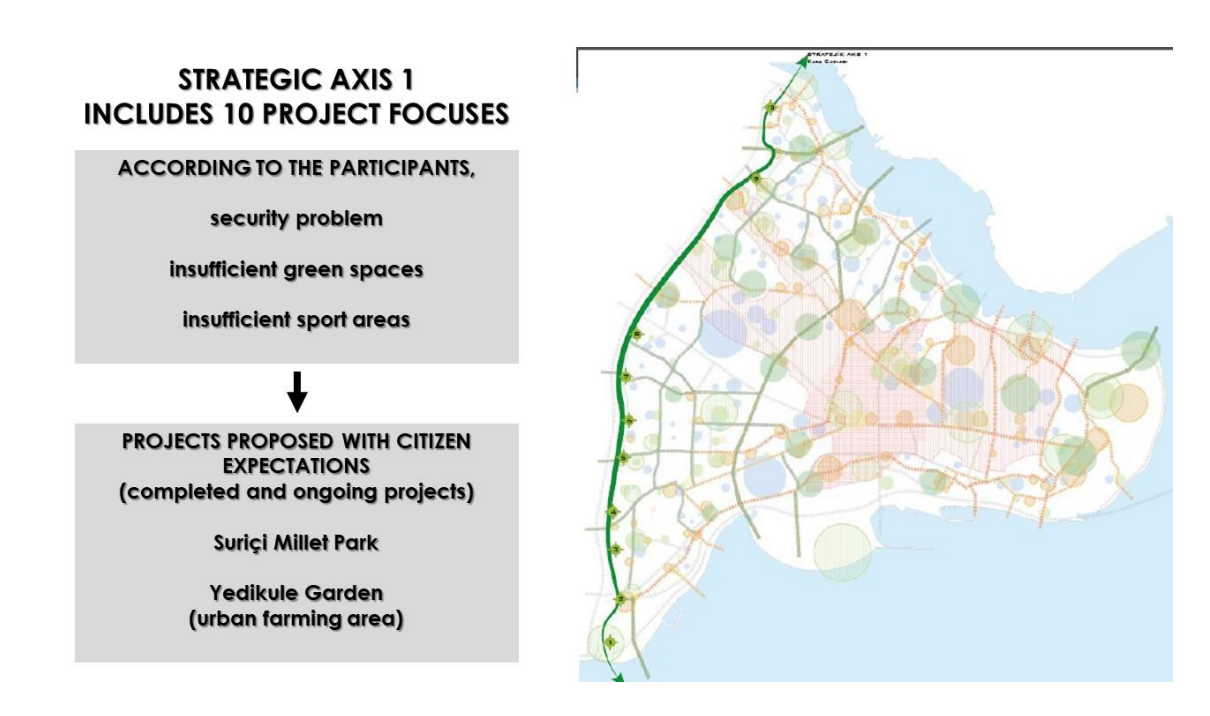 The most innovative aspect of the experience is that the future of the district is planned together with the residents, employees and even visitors, and in a way that responds to their problems, needs and expectations.

In addition, the data obtained from Fatih Municipality's citizen participation platforms have been integrated into the project, so requests and suggestions from different ways have also provided input for the analysis. Each request and complaint received by the citizens to the Fatih Municipality Communication Center and recorded in digital environment has been included in the evaluation. In addition, by analyzing incoming demands and complaints, the gender of the citizens, age groups and the neighborhoods and streets they reside in, evaluations have been made specifically for social groups and strategies and projects have been developed in this direction.

In addition, with the Suriçi Card application, a survey was conducted with young people using libraries and young people were included in the process and their demands and expectations were evaluated. All survey results collected in the Fatih Municipality Communication Center pool are stored digitally and statistically included in the project processes.

Although the most important actors of the whole process were the participants, academicians and relevant actors of the institution came together to analyse the data, evaluate the results and develop suggestions.

Households are the actors whose opinions and evaluations are taken to analyse the issues such as understanding the problems of the inhabitants of the city and their perceptions about the district, social solidarity, neighbourhood relations, security perception, perception towards immigrants, the level of satisfaction with the services and the environment they live in, environmental pollution.

Business owners are the actors whose opinions and evaluations are taken to analyse issues such as general information about working areas, the quality of workplaces, perception towards immigrants and urban renewal.

Visitors are the actors whose opinions and evaluations are taken to analyse issues such as the image of the city, security and livability.

Academicians supported the process at the stage of collecting and analysing all data, synthesizing them according to the determined themes, and determining the action areas where problems were concentrated and needed to be intervened.

Relevant Directorates: Views and evaluations were received from the internal units of Fatih Municipality.

“The project describes the method of construction of the strategic plan but seems more oriented to the improvement of the attractiveness of the municipality than to the answers and demands of the local citizens.”

“As positive elements we can point out the questionnaires directed to residents, local and foreign visitors and businesses and the online consultation with the youth. As limits, that is a simple consultation [or call for ideas], quite conventional, with no proper discussions and debates about the results and the plan itself, once completed. The four themes for the evaluation [spatial attractiveness, urban degradation, urban conservation, etc] pay very little attention to the huge poverty, unemployment , high level of disparities] and could lead in continuity with past years to more demolitions and evictions in name of “spatial attractiveness” or tourism.”