Keynote address. The director of the play and the actors in dispute: Who and how do they decide and build cities today?

The moderator began the session by asking the question: can we all, over the course of these three days, identify socio-organisational citizen practices, where participatory democracy, with all its difficulties, achievements and challenges, draws up innovative routes to a greater understanding of what we call the right to the city, and addressed the keynote speaker, Yves Cabannes, with the following question: what are the paths towards a more democratic and inclusive city? 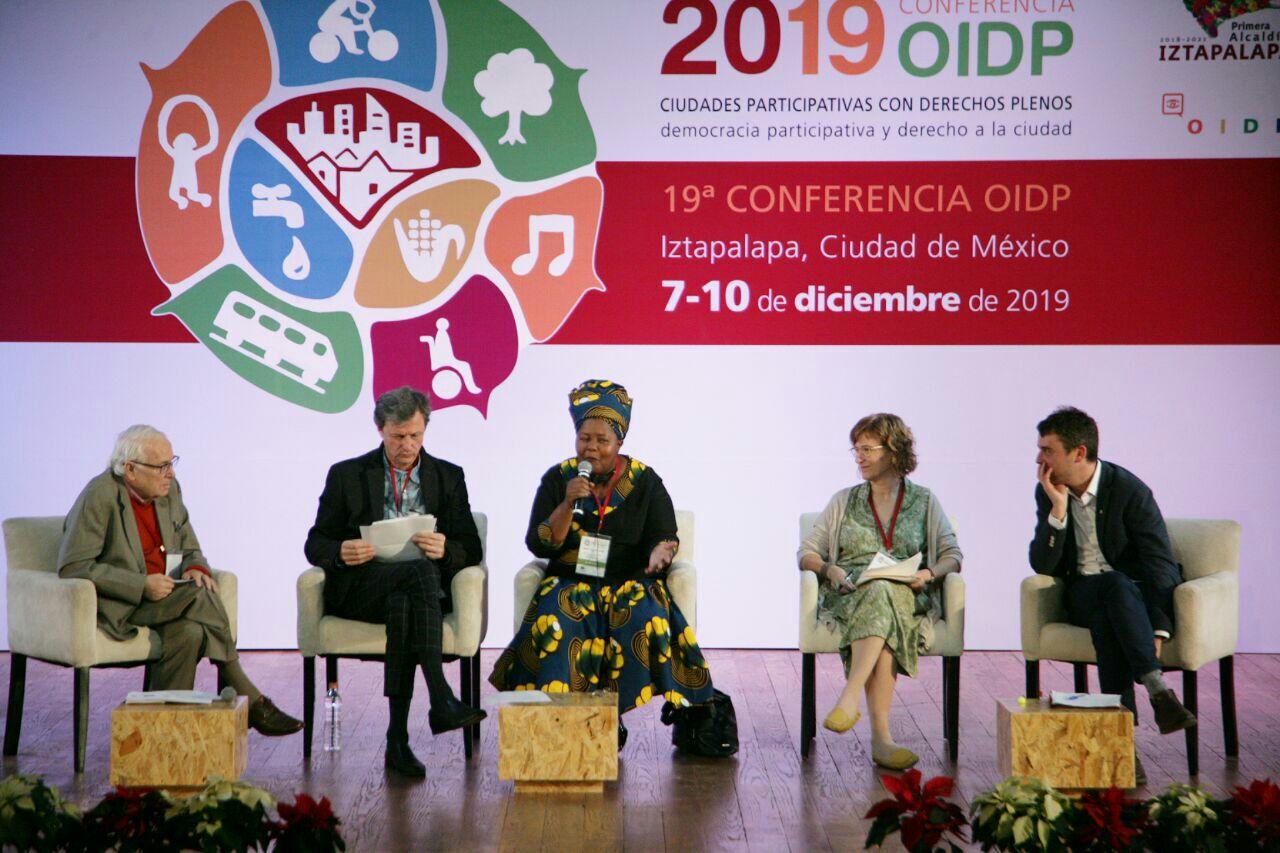 In his speech, Yves Cabannes indicated that Mexico City is the largest and most important melting pot in Latin America and highlighted the importance of the wealth of the native peoples in Mexico for the formation of the city, although he pointed out that, historically, these have been invisible.

He pointed out that there is a crisis in representative democracy and in the model of urbanisation based on private property, which does not ensure a dignified life for the vast majority, and this is reflected in the social movements that are emerging in the public squares of Latin America, which are becoming multiple alternatives for building cities.

The speaker indicated that one of the logics that explains what is happening is the growth of inequalities. One example is that in 2018, 82% of the wealth created in the world was left to the 1% of the population and the poorest 10% lost 11% of their purchasing power. He pointed out that the challenge is that if participatory and representative democracy is not able to redistribute, there will be more people on the streets against the political system.

The second point the speaker made was that the novelty of the urban crisis is that it is related to three axes: finance, food and fossil fuels, and he stressed that these three combined make an explosive model that will have urban consequences, while the context of climate change is accelerating the deflagration of these three axes.

As far as finance is concerned, he recalled that today financial reserves are not in the hands of the United States, France, England or Germany, but are still in dollars and euros, which means that investment funds can acquire them at a vile price, and dispossess cities, land, territories, wealth, calling it "democracy". He also pointed out that these funds are the ones that are currently managing pensions in Mexico, fuelled by political corruption.

On the food axis, millions of people in the world are undernourished, millions are obese and sick; on the hydrocarbon front, reserves are beginning to run out, leading to wars over fuel; and climate change is reinforcing inequalities.

He mentioned that his work in these twenty years has been directed towards identifying other axes to build other possible cities:

The speaker concluded by pointing out that bridges must be built between these six axes to form a real alternative system of production for the city. By way of example, he explained that a lot can be done if we add 10,000 participatory budgets, 2,000 local currencies and more than 1,000 resistance to evictions. This has a weight within international agendas. He also demanded the right to work and to the place, so that the inhabitants can build a different world and the collective appropriation of the city.

He concluded by pointing out that knowledge must be documented, made visible and mutualised. A new capitalism of accumulation of knowledge must not be allowed to develop. The social management of knowledge is necessary for this to be a common good.

After Yves Cabannes' intervention, the moderator, René Coulomb, invited the panelists to express their opinion on the six paths of innovation to strengthen and consolidate the processes of participatory democracy, and asked the speaker a new question about how to ensure that there are not only small experiences, but also a collective appropriation that can change the form of democratic governance in cities.

Marc Serra, Secretary General of the IOPD and Councillor for Citizenship Rights, Participation and Global Justice of Barcelona City Council

Marc Serra brought to the table his experience as a councillor in Barcelona, within the framework of citizen participation, and pointed out that the party he represents (Barcelona in Comú), which emerged from the streets and squares under the cry of "we are not represented" now governs Barcelona.

The panelist said that when his party began to govern, they asked themselves whether participatory budgeting was the best way to empower citizens, and said that citizens should be involved in drawing up the entire government plan. The plan involved 42,000 people and more than 10,000 proposals and 400 face-to-face discussions.

One of the examples of citizen participation in the face of the situation of evictions was the creation of an anti-eviction unit with which more than 7,000 people were stopped. They also limited the licenses of hotels and tourist flats and closed down the illegal ones. Social spending was increased, creating, as raised by social movements, energy service points to address the problem of cutting off supplies to families who could not afford them. In addition, a local energy company was created.

He stressed that 70% of the proposals that came from the citizens were accepted; everything was done face to face and using technology, to connect with the new generations that wanted to participate in the future of the city. 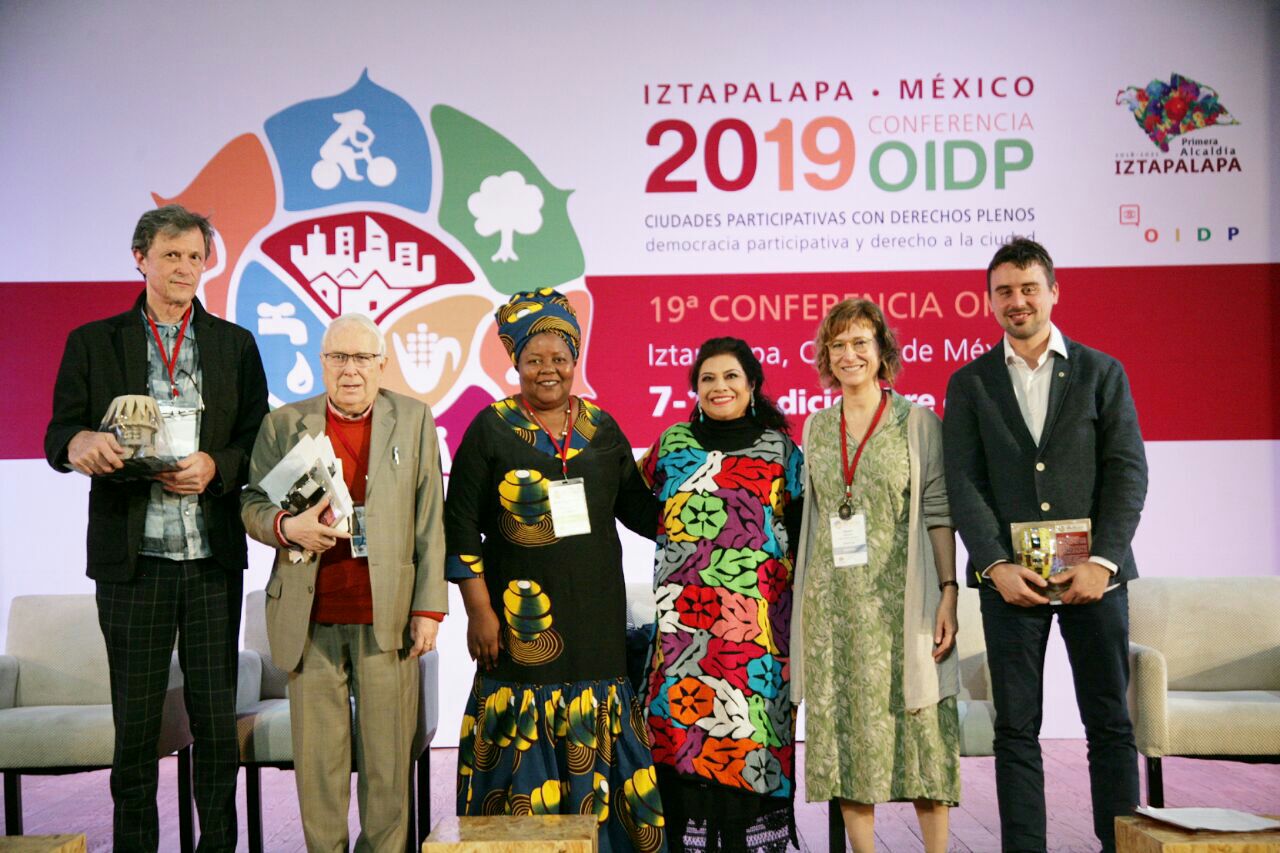 In this context they have held an open chair where there is dialogue with the community and their concerns are heard. Popular meetings and participation forums have also been set up. There is a municipal forum for women, for the youth, and for children, among others.

She pointed out MOI's experience in terms of socio-organisational practices of participation that take up at least three of the axes mentioned by Yves Cabannes: the right to place, resistance to evictions and collective land ownership.

She explained that the MOI emerged in Buenos Aires as a way to fight for the right to stay of those who had been occupying the houses and not to be displaced to the periphery. On the other hand, land ownership, because cooperatives promote the collective ownership of housing complexes and the production of housing. Through this system, which went beyond a small organisation, there was interference in public policy from a proactive standpoint.

She stressed that the MOI's cooperatives have served to propose a type of legislation that promotes housing construction through processes of self-management (the city's model of production, in which the inhabitants and residents themselves appropriate the construction processes and administer public funds). She explained that these achievements have been obtained through participatory processes that redirect and reposition part of the budget of the city of Buenos Aires for social housing to a self-management housing programme proposed by the organisations.

She mentioned that one of the relevant elements of this model is to propose and fight for the right of organisations to decide the location and the constructive form of their housing complexes, going beyond the traditional way in which housing policies are made in Latin America, which is through the market. The panelist highlighted that this programme has managed to expand and transcend the organisations that promoted it, such as MOI.

She highlighted that the model has three axes related to participation practices:

In conclusion, she stressed that these three axes are achievements and demands of the people's organisations that are now in the legislation and show transformative practices in terms of deciding the city.

The moderator proceeded to give the floor to the keynote speaker to conclude the topic and comment on how to consolidate and give more impact to what is being analysed.

Yves Cabannes concluded by highlighting the intervention of the Mayor of Mandlakazi and the progress made in this municipality by Eduardo Mondlane, founder of FRELIMO and anti-colonialist fighter, and pointed out that this shows us that "long times in the construction of politics are not in vain, San Miguel Teotongo in Mexico is not in vain, and the twenty years of Rosario in Argentina are not in vain, because it takes time to build a different democracy."