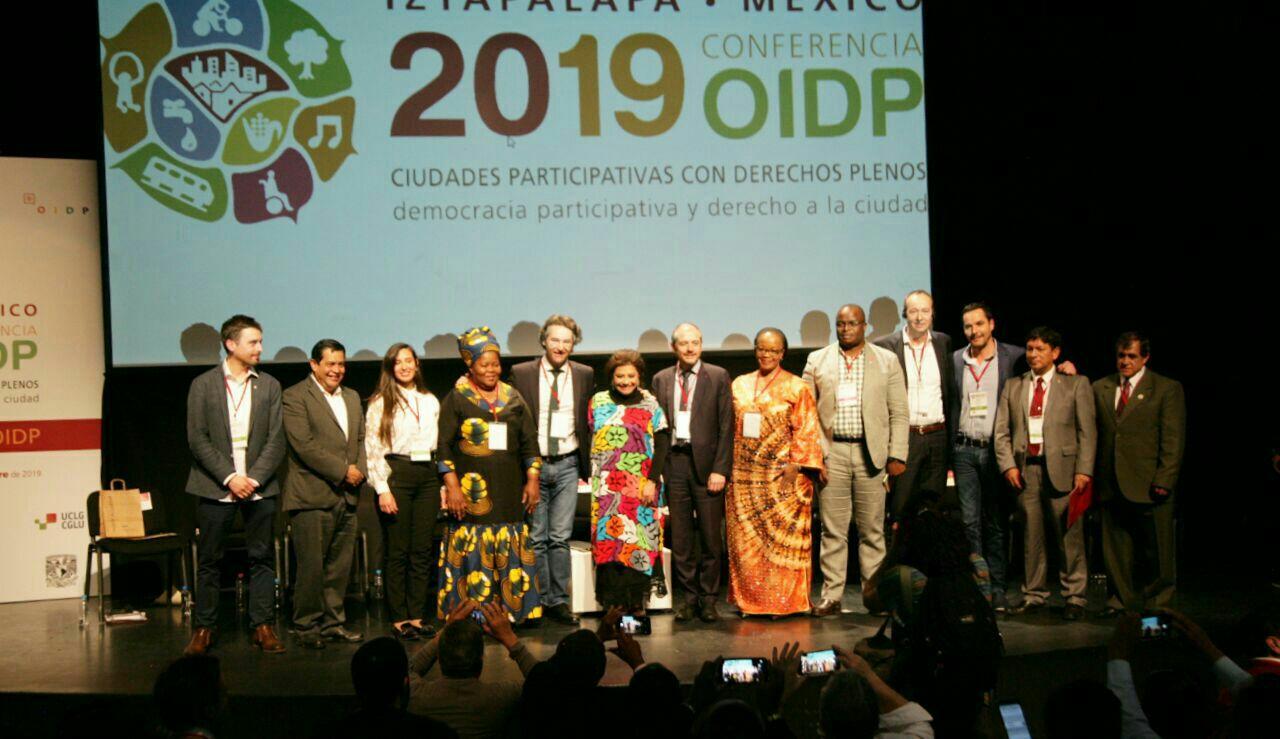 The moderator pointed out that it is a fact that there is disenchantment and a distancing of citizens from democracy and its institutions, but he wondered how we can make sure that this discontent is not taken advantage of by the right, and what local governments can do so that citizens regain confidence in democracy and local governments.

He pointed out that there is a great crisis at the international level, and that Mexico has also recently faced a very deep crisis of the political party system, which was reflected in this latest election, in which people extraordinarily supported Andrés Manuel López Obrador. With regard to this crisis, he pointed out that what can serve Mexico least is polarisation, and that local governments have no other solution than to produce results.

The speaker pointed out that in 2014 a new constitution was voted on in Tunisia, in which there is an article that obliges the electoral body to include young people. This is a principle of parity and equality (not only of gender, but of age), so that 1 person in 4 must be under 34 years of age. She noted that thanks to this legislation she was able to be elected as deputy mayor. She stressed that this is an example of the materialisation of a concrete demand of the popular movement.

She explained that since this movement (which gave birth to the new constitution), there is another one initiated by young people whose slogan is "state of consciousness", so that it is not only a moment of effervescence but it lasts through time and young people are integrated into the political life in a full way.

The speaker pointed out that in order to resolve this crisis we must start from where we originated, being aware that it is necessary to include the priorities of young people, women and children, with a transparent platform that leaves no doubt about what has been achieved.

She stressed that it is a process similar to the family sphere, in which the solutions found must be by consensus and must be decided together. No one should feel outside the government process, she explained, because each of us is responsible for what happens in the municipality.

She pointed out that according to the experience of the commune of Luhwindja, success has been based on them deciding together with the community, which has made it possible to have a direct follow-up with the population. She indicated that, at the same time, another factor of success is that they have a very close relationship with the central government, and if they do not reach an agreement with respect to large projects, the discussion is addressed together with the central government.

Pascal Clouaire pointed out that in Grenoble, unlike the rest of France or Europe, there was no presence of the extreme right, and they did not have to fight it.

He mentioned that what Grenoble has done to have a progressive government in which participation is one of the key elements is to believe that democracy is part of the solution. Democracy is a tool to the extent that we regain the confidence of citizens and that they become interested in participation and participatory democracy.

He raised the question of under what conditions can we maintain hope today. He said that many young people find it very difficult to keep it up. He pointed out that democracy can contribute as long as politicians are willing to give up power and give it to citizens. He said that to the extent that we can accept each other's discourse we will be able to deal with these kinds of questions, and he made it clear that politicians must accept losing power and give in to experimentation. Recognising mistakes, he concluded, is accepting that we can make mistakes and that it is everyone's responsibility.

André Viola, President of the Departmental Council of Aude, France

He pointed out that they have been alert to the rise of the right, and that there is a very vertical conception of power. He mentioned that during the so-called "yellow vests crisis", the president declared himself alone in the face of criticism. This crisis originated in the rise in petrol, he explained, which also represented a challenge for the left, to question how local government can act, which showed that participatory democracy can be a tool.

He explained that they carried out an experiment (rejected by the central government) with universal income, and that they did it by involving the most precarious population. After their experience, they realised that before increasing income, people's perception of income must be changed.

His speech pointed out that politicians on the left and the right have to value democracy, and not only those on the left. The extreme right must be confronted and fought without fear and with information, he said. He pointed out that the extreme right exploits populism that is based on fears, and that a mayor has a lot of power even if he has no money because he has the power of example. If a politician sets a good example, he said, he can influence his population.

He pointed out that part of the problem is that parties and politicians do not manage to make their people dream. "The route is to change in order to build trust, in Valongo we believe a lot in transparency. It is difficult to work the first time we open the door and start to give information; after that it is very easy to open the door, these are the ways to fight the extreme right". He concluded that local democracy consists of this relationship of proximity, and that representative democracy is a twin of participatory democracy; if the latter is healthy, both are healthy.

Edson Santos pointed out that the parties are solely responsible for the fact that democracy is in crisis, but sometimes the movements overtake the parties. Thus, he said that when we are in one place and we do not feel good, it is necessary to change places, because we must seek that inspiration and common values.

The speaker pointed out that there is a global political crisis and that Ecuador is no exception. People are choosing new leaders, they expect these politicians to fulfil their campaign offers as soon as possible, and above all they expect welfare to be generated.

He explained that the current situation demands that those in power generate employment, works, services and well-being, and in this way the people feel satisfied and feel that they have participated in decision-making, generating development together with the government. On how to change people's political views, he said that participatory democracy needs to be strengthened so that people are part of government decisions.

In Ecuador it was said that the worst democracy is better than the best de facto government. When a ruler does not allow assemblies, democracy is threatened from the smallest levels and social discontent is generated, he said.

He said that in today's globalised and technological world, people can find out in a second what decisions a ruler is making, so that if they don't do things right, the next day there will be criticism on the social networks, and if they don't take the appropriate and necessary corrective measures, that government will not have the people's support.

He concluded by stating that in the times we are living in, a politician must promote citizen participation so that government and citizens are the ones who generate development from the local levels and that there is coordination at all levels of government, especially at the level where the population in greatest need is.

She began her speech by saying that formal democracy is not enough, and that we have to go further, to make democracy the way to solve the daily problems of the population. For her, democracy also means recovering historical social agendas, and more so if one comes from a left and progressive vision.

She pointed out that we must build another type of democracy, participatory democracy, because when the population votes they must realise that it is not a question of changing people but of changing projects. She admitted that those who take power, like her, must be aware that the struggles of the people must not be separated from the agendas of local governments.

She also emphasized that in order to prevent the return of the right wing, after important struggles by citizens, the task of those who are at the head of governments, but also of the popular movements that made the transformations possible, is very important. The speaker stressed that there has to be a responsibility of the society that has fought historically, that the population also has to be in charge of deepening these transformations and the popular movements have to be radicalizing the governments for the decision making.

It is not just a matter of changing people and governments, he said. It is about transforming reality, a difficult task for local government leaders, and President López Obrador's motto: "Those of us in government today must not lie, we must not steal, and we must not betray the people.

She concluded by saying that formal democracy is not enough, but that we must get to the bottom of this and develop all the projects with the people, and that is how the people will defend these projects.

Marc Serra stressed that there is also a woman mayor in Barcelona, who comes from the social and housing rights struggles, and concluded by telling a little story of when they managed to win the elections in 2015, which was the first time the popular classes had managed to come to power. The first thing the mayor did, she explained, was hang a sign on the door of her office that said, "Let us never forget who we are and why we are here," and stressed that with that shared desire to know why we are here (because we are here to serve the citizens, the people, to expand democracy and to give up and share power, she said) she proceeded to bring the roundtable of elected officials at the 19th IOPD Conference to a close.