Between November and March 2021, 100 Scots are meeting to shape climate action in the country.

After the United Kingdom Citizens' Assembly on Climate Change, held in Spring 2020, Scotland's Climate Assembly (Seanadh Gnàt-shìde na h-Alba) was launched, starting meetings in November. It is worth noting that Citizen Assemblies are not novel in the isles: already in 2012 Ireland had held a constitutional convention, followed by multiple Citizens' Assemblies between 2016-2018. The UK, aside from the Climate Change Assembly, organised a Brexit Assembly in 2017; England held one on Social Care in 2018 and Wales had its own national assembly in 2019.

In Scotland, a general Citizens' Assembly was set up in 2019, and has yet to conclude and submit its decisions (more information here). The year 2019 also saw Scotland's new Climate Change Act passed, introducing more ambitious climate targets than UK's. In order to design its own roadmap to net zero, the act included the necessity to establish a Citizens' Assembly under the following guiding question: How should Scotland change to tackle the climate emergency in an effective and fair way?

The Arrangements for the Administration and Operation of Citizens' Assembly of Scotland: Scotland's Climate Assembly report details the guiding principles of the assembly. It established that Scotland's Climate Assembly is independent of Ministers, Government, and Parliament. Besides, it sets out that, to ensure balance and legitimacy in the establishment, conduct, and reporting of the Citizens' Assembly, an independent Stewarding Group representing stakeholders has been appointed.

In September 2020, 20,000 invitation letters were mailed to randomly selected households from all the addresses in Scotland listed in Royal Mail's Postal Address File database, such that: 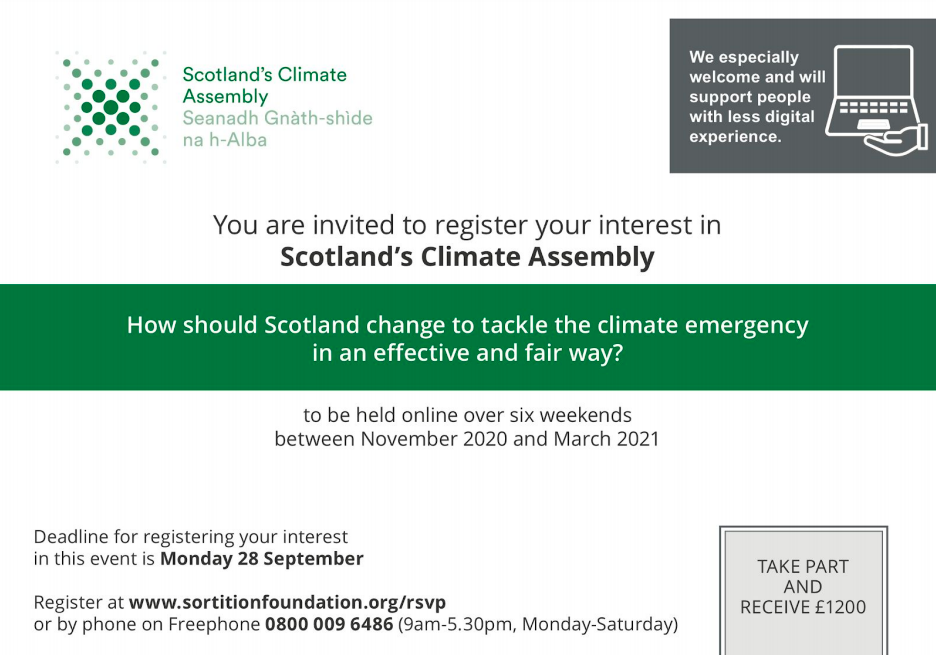 Any person aged 16 or over living in a household that receives an invitation to apply to participate in the assembly will then be able to reply by telephone or electronically online. Respondents were asked to complete a form asking a number of questions that will assist the selection of members in a way that is broadly representative of the wider Scottish population.

In order to create an assembly that is broadly representative, members were be selected from the responding applicant pool based on eight different criteria: Age, Gender, Household income, Ethnicity, Geography, Rurality & Disability.

Unlike France's Convention Citoyenne pour le Climat, Scotland's includes a distinctive criterion, also present in UK's assembly: Attitude towards climate change. It ensures that the assembly does not exclusively rely on the opinion of citizens who are already convinced of the urgency of the matter, thus proving how every citizen, when informed and faced with evidence and expert opinions, is also committed to fighting climate change. It is also a significant asset in terms of legitimacy of the recommendations.

These criteria were specifically identified to ensure that the assembly is composed of a diverse mix of individuals from all walks of life so that members can learn about, understand, and connect with people who have different backgrounds and experiences. The participation is not remunerated but expenses are paid: People who take part in the Assembly will receive a monetary gift to compensate them for their time and any expenses incurred as a result of participating in the Assembly will be covered. Find more information about the selection process in the dedicated report.

In light of the current restrictions and ongoing Covid-19 situation, the Assembly is held online until further notice. All evidence sessions are being recorded. The deliberations between Assembly members are private and it is not possible for observers to listen to or participate in those discussions. If circumstances allow assembly meetings to be held in person, arrangements will be made to accommodate observers.

However, virtual observer sessions will also be held, where in order to allow the general public to learn more about the Assembly's evidence base and deliberative process and to get involved with Q&As with some of the speakers. While the majority of observer places will be by invitation, requests to observe are welcome. To apply to observe an Assembly meeting, you can complete this form.

Discussions that take place during the Assembly are guided by independent, professional facilitators to ensure everyone has an equal opportunity to share their views. Throughout the Assembly, experts provide evidence and answer questions from the Assembly members. You can find all the material and videos of each session in this link.

The Assembly will report to the Scottish Parliament on the outcomes of their deliberations in 2021.