Roundtable: Citizen participation as an articulating force of society for sustainable development

The session took place on 9 December at 9am in the atrium of the Iztapalapa Cathedral, and was moderated by Claudio Sule, from the Network of Local and Sub-national Governments of Latin America and the Caribbean for Sustainable Development, Chile.

He reflected on why citizen participation is promoted and how far we can go with it, pointing out that through it it is possible to obtain information, consultation, agreement, co-creation of policies, delivery of conditions for the community to develop projects and, in a more advanced way, accountability.

Sule stressed that the Network of Local and Sub-national Governments of Latin America and the Caribbean for Sustainable Development goes further, proposing that citizen participation should be the articulating force of a society for sustainable development, from the local to the international level. 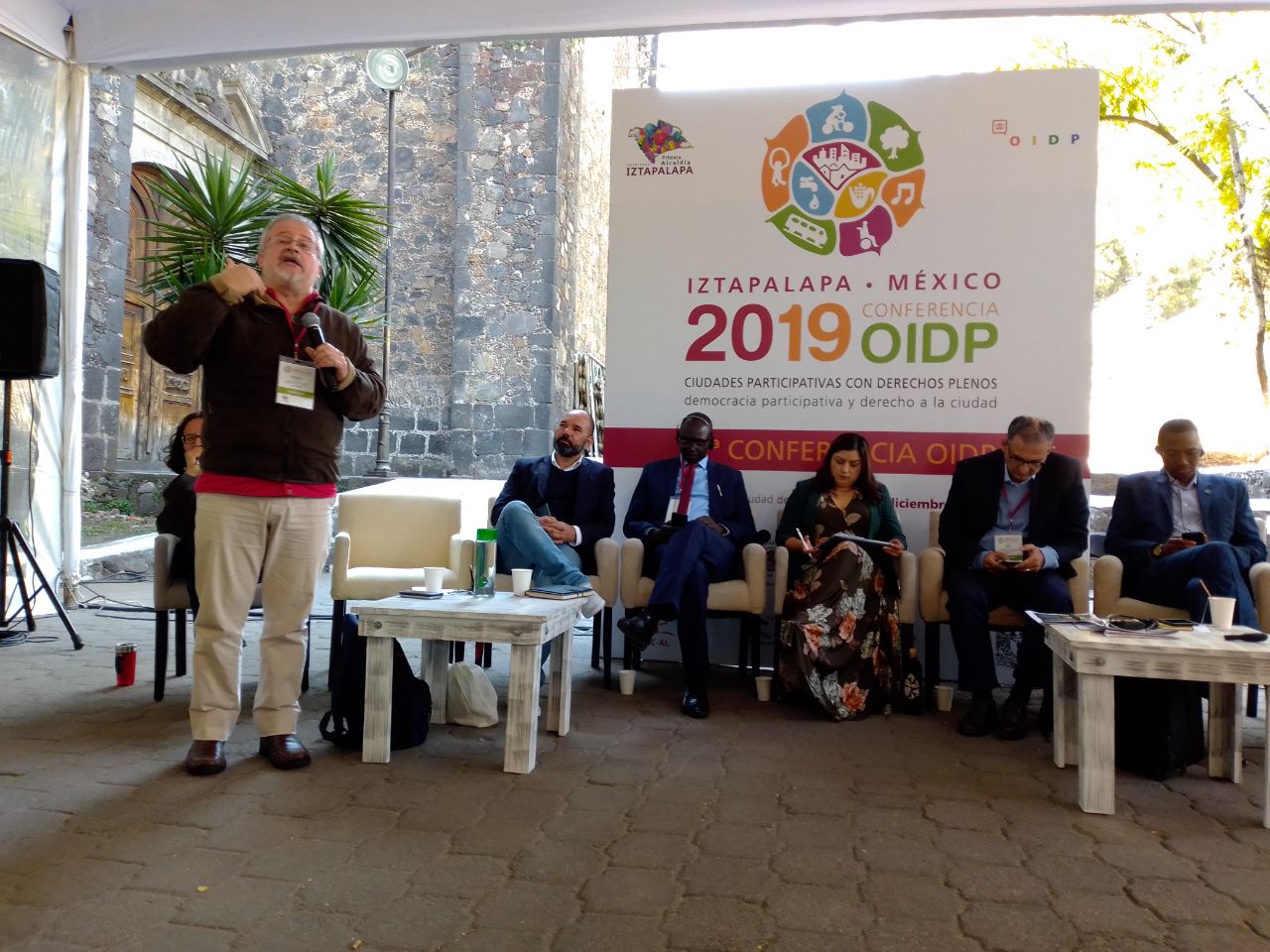 The speaker began by explaining the Bolivian government's Law 025 on Social Participation and Control to guarantee governance, municipal public institutions, transparency, social participation and control, accountability and consultation with organised civil society at territorial, sectoral (unions, school boards, transport, markets) and functional (thematic citizen councils) levels. He also explained that the district citizens' hearings are held annually in each of La Paz's 23 districts, and that the city has seven sub-municipalities. For him, these public hearings are a mechanism for public accountability which guarantees direct participation and social control.

The speaker pointed out that the Citizen Assistance Fund available to them is an expression of good participatory budgeting practices where, in consensus with the population and through neighbourhood workshops in the 23 districts, the annual operational programme and budget are formulated and resources are distributed for the implementation of neighbourhood projects. The dark side of Participation appears when groups or sectors intend to use the processes to their advantage, so it must be accompanied by processes of citizen co-responsibility.

In his presentation he acknowledged that in these processes, young people have committed themselves to causes and have participated against the manipulation of the vote. He also explained that through the citizens' laboratories, spaces have been created for the exchange of experiences and good practices to promote and disseminate the culture of transparency, such as the Youth Brigade for Transparency.

Finally, he explained that territorialisation or localisation refers to the process of designing, implementing and monitoring the strategies for implementing the SDGs, ensuring their alignment with the priorities and opportunities offered by the local context.

In his presentation, the speaker proposed sustainable development in three pillars (economic, social and environmental) and pointed out that the governance dimension is fundamental and must be participatory. With regard to the latter, he wondered how to create a link between citizens and the authorities, since citizens did not recognise themselves in the latter. To achieve this, he proposed 7 principles:

1) Participation by representative segments of society in all decision-making stages relating to neighbourhood management.

3) Improving the conditions of the neighbourhoods through efficient budgeting of the supply of services.

5) Articulating the different territories, with coherence between local initiatives and sectoral policies.

7) Strengthening local leadership so that the corresponding authorities can ensure a political and strategic profile appropriate to the problems of sustainable development.

The conclusion he draws is that it is not possible to build a city without the participation of its inhabitants. 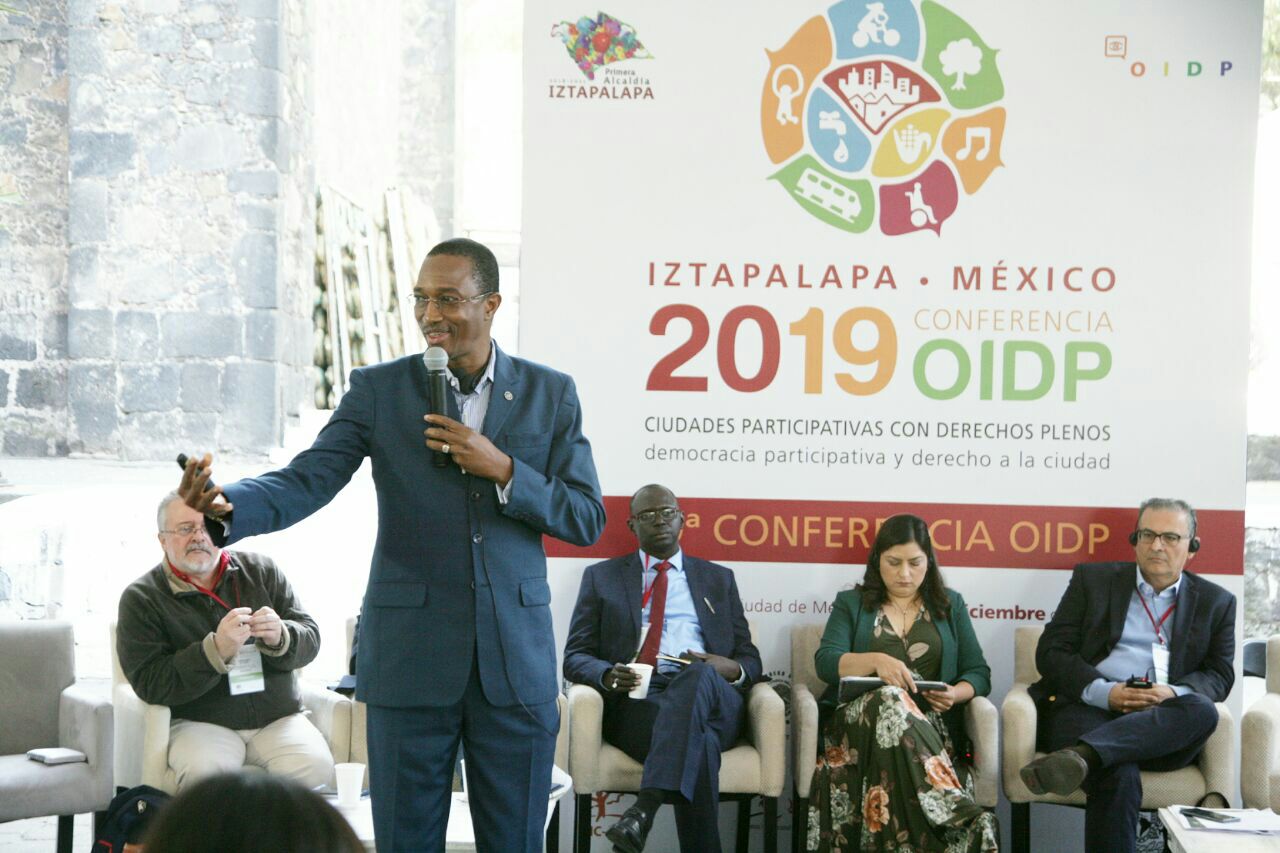 Baba Ndiaye, President of the Department of Kaolack, Senegal

The speaker began by explaining how democracy has developed in Senegal, stressing that an advanced and ancient democracy had been developing in his country since 1896. He also indicated that changes have been seen with many reforms, but the most important was decentralisation in 2013, in which the region disappears and the departments become more significant, including the municipalities.

He concluded by saying that when we talk about participation we are talking about principles, practices, regulations and institutional development, such as the reforms that have strengthened participatory democracy.

Among the results and impacts of the participatory budget, he points out that the change has mainly been the political rationalisation of the state in its relations with civil society, opening up the sphere to co-management of resources and blocking authoritarian, patrimonial, clientelistic and personalist management practices. At the social level, redistributive justice and social inclusion, reversing the relationship and priorities, incorporating excluded sectors as subjects of rights; at the cultural level, active citizenship, a civic and republican social conscience has been promoted.

He noted that the human development index was also impacted by the participatory budget. Thus, an observatory was set up to measure the human development index in 83 neighbourhoods with 335 micro-regions. The greatest impacts of the budget were on education, which was the main demand. The participatory budget encourages popular intelligence, which was what, according to the speaker, indicated to them what needed to be done.

He concluded by pointing out that a new format for popular consultation is now being discussed, one that is broader, more participatory, more committed, more dynamic, and makes better use of digital tools.

Intervention by Armando de Negri, Coordination of the Participatory Plan of Asunción, Paraguay

De Negri begins his presentation by mentioning that participation is not a technical instrument but a political exercise in power building. Participation is by definition a space for political education, he said.

In the experience of Asunción, Paraguay, the social area is focused on an intense strategy of democratic participation in which social, economic and environmental needs are identified and addressed by re-reading social relations in territories or places, such as the bus terminal or the supply centre.

He points out that the trigger question is "what positively or negatively affects the quality of life? Behind every need there is a right, he says, and the SDGs provide a vision from the perspective of rights, which requires a political structure. In addition to the 17 objectives, she said that there is another one: the right to development, to avoid the fragmentation of rights.

In his presentation, he emphasised that if the impact of development cannot be measured in terms of the impact on inequality, development is meaningless. Therefore, the strengthening of participatory democracy as an emancipatory exercise of citizenship and the reorientation of government action is the main strategic tool for democratizing civil and political societies and for promoting effective national and local implementation of the SDGs.

Jairo Jorge agrees with the approach to radicalising democracy put forward by Armando de Negri in his intervention, and explains that in Canoas there is a vision of horizontal leadership, where all leaders are capable of co-creating, sharing and promoting collective intelligence. The main characteristic of this leadership is its unpredictability, because if it is not in an atmosphere of discussion of participatory democracy, the risk in which democracy is placed will not be understood and it will not be known what steps to take. He also mentions that it is necessary to link the representative to the represented and to generate a government centred on the citizenry.

It points out that three principles are required for citizen-centred management: 1) deconsecrating authority; 2) contrasting the universalisation of health and education services in the 20th century with the approach to the needs of each citizen in the 21st century; and 3) developing a systemic vision, with comprehensive and unbiased solutions, which implies a whole system of participation.

In Canoas' experience, a participation system was created with several doors and ways to approach the citizen, from individual, collective and collaborative demands to more strategic processes.

The Mayor pointed out that the SDGs do not align by themselves with public policies at the local level, so monitoring in the municipal and local spaces is lacking, and a focus on medium and long-term actions is required that is not limited to the three years of municipal administrations.

In conclusion, he stated that the issue is to get more rights and not lose ground, and to generate inclusion for people with disabilities, older adults, indigenous people, young people... always with a vision that integrates the environment and improves well-being.

Participation has very different modalities according to the contexts discussed at the table.

The historical, institutional, regulatory factors and the type of problems, means or procedures and objectives or goals of participation are also very varied.

In a more ambitious (or more radical) perspective, participation implies demanding the right to development, connecting it to the demand for compliance with the SDGs but also to the questioning of the functional approaches of international development agencies.

It is important to consolidate the institutions, regulations and procedures that are indispensable for stimulating and broadening the participation of citizens in the definition of development.