Keynote Address - The stage. From the (neo)liberal city to the construction of democratic cities

"The strength of women is at the heart of the democratic city.  (Anacláudia Rossbach at the 19th IOPD Conference) 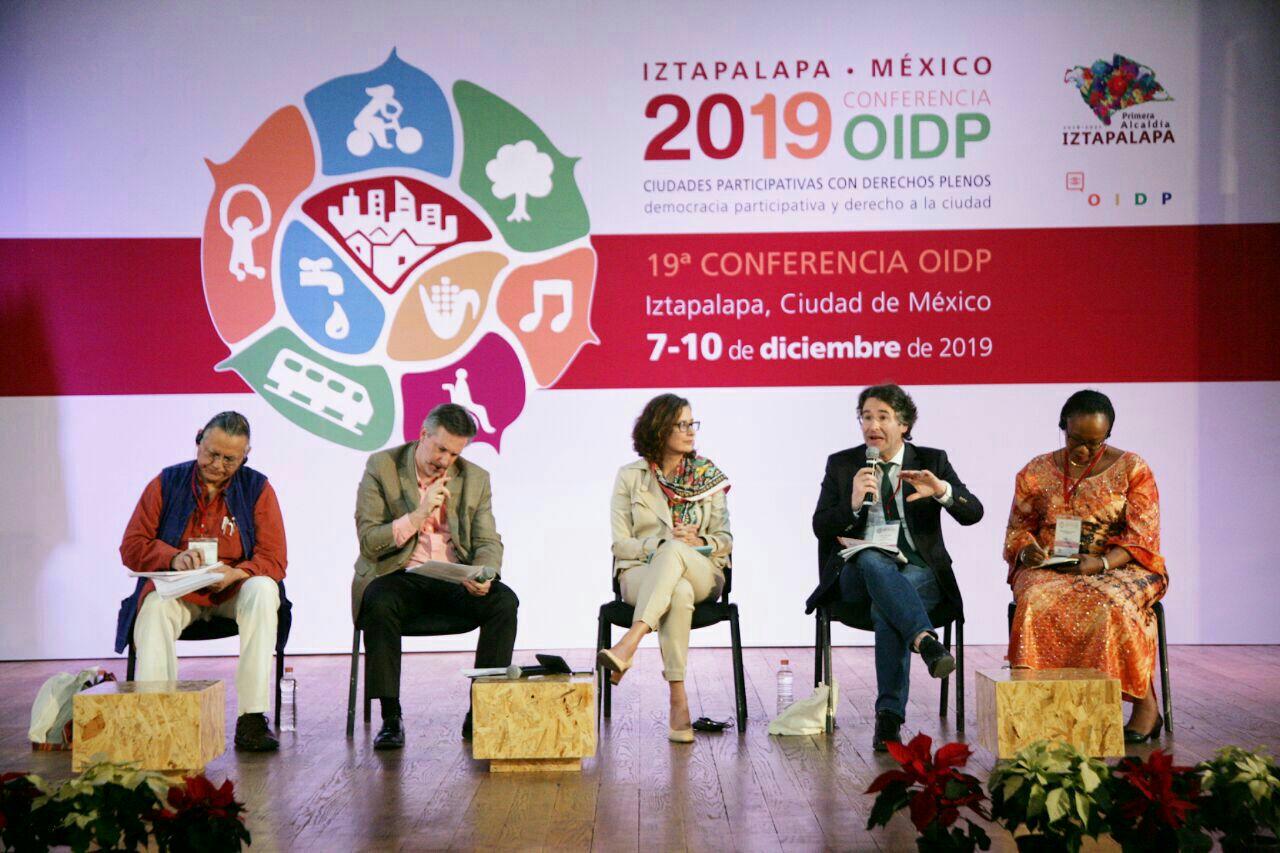 Anacláudia Rossbach began by thanking the IOPD, UCLG and the Mayor of Iztapalapa for holding this conference and acknowledged the strength of women mayors in Mexico, stressing that gender equality and women are at the heart of what democratic cities are all about.

In her intervention, she expressed her disagreement with the idea that we are at a time when we are moving from neoliberal cities to more democratic cities, since she said that Latin America had already experienced a very strong wave of democratic cities in the 1980s and 1990s, inviting us to recognise that many advanced and progressive policies currently being applied in cities around the world were inspired by this period.

She noted that neoliberalism has permeated urban policies equally in cities of the global North and South, with housing and urban mechanisms and policies disconnected from local realities and communities. This has happened even in Latin American cities that had been at the forefront of democratic movements in the 1990s. For this reason, she stressed that the path to change is the construction of democratic cities, participatory mechanisms and the recognition of the right to the city.

She stressed that the Habitat III conference in Quito in 2016 was very important for defining a structure of urban governance in the world, in which many countries were present and signed the New Urban Agenda commitment. In her opinion, Habitat III was a participatory process where organized neighbours, universities, civil society and NGOs had a role to play in laying the foundations for democratic cities.

She mentioned that Habitat III and the New Urban Agenda recognized that local actors (governments, people and organizations) have a leading role in leadership and decision-making in defining the direction of cities, as well as the importance of national government in facilitating this, providing laws and legal frameworks, investments and subsidies, and emphasizing multilevel governance with citizen participation.

The speaker indicated that nothing should be left behind: priority should be given to gender equality, participation, a vision of the community, and the design of policies in a participatory manner, without forgetting those who live in informal conditions or in rural areas. She also highlighted that the New Urban Agenda mentions the right to the city and recognizes fundamental principles such as guaranteeing real instruments and mechanisms of governance with effective participation by society, and guaranteeing the social function of land, property and the city, a fundamental point for guaranteeing democratic cities and opposing the neoliberal movement.

She pointed out that the social function means that the interest of the community and society is superimposed on property rights and the interests of real estate capital. She mentioned as a success story the municipality of Belo Horizonte, in Brazil, where a Master Plan was recently carried out, designed in a participatory manner, in which the municipality generated new charges to obtain resources to invest in public infrastructure and social housing, and established zones of social interest and social protection.

She concluded by inviting people to learn from the experiences that are already working in the area of participatory democracy and the right to the city, and said that the results of this conference should be multiplied in order to raise these experiences to other parts of the world.

The speaker indicated that his opinion represents that of a temporary mayor but a timeless citizen, with a European vision, inviting politicians to assume themselves as temporary, but without avoiding their condition as timeless citizens.

He began by asking himself (and the public) what a democratic city is and what a neoliberal city is. He mentioned that for many people a democracy is a voting mechanism, which is questionable: many dictators use elections as a democratic mechanism. For him, a democratic city is where everyone, rich or poor, participates equally; for this he considers that education is necessary, or there will be citizens who vote without understanding or analysing the programmes.

He pointed out the importance of creating a system through education, culture and a whole set of mechanisms that allow a poor person to yearn for and break the cycle of poverty; he said that this is one way of measuring whether a system is democratic.

He also said that political and public interests (and not economic ones) should guide the management of the city. Being a mayor, he said, means talking about power, but some people with power become wonderful people while others become nightmares.

The mayor criticised the limitations of realising the ideals of democracy, as there is a disconnection between democracy and access to information. She pointed out that although the theory of democracy is available, it is not implemented in practice and does not reach the cities.

Her speech emphasised the importance of citizens' struggles and participatory processes, and said that lessons should be learned from cities with successful cases of these processes. In this lies her hope, since she indicated that there is still a long way to go to have democratic cities as long as the political power does not provide the answers and its centralist logic prevents it. However, the citizens and the movements that exert pressure are giving a ray of hope and will end up consolidating the democratic cities in the Congo.

In his speech he expressed his certainty about democracy as one of the great ideas of recent years in history, although it is now in danger given some of the changes taking place in the world. He pointed out that there are two relevant aspects that represent a gap in this conference and should be studied:

The historically new phenomenon of climate change and climate refugees. We are seeing the appearance of cities and continents with closed doors, where processes of xenophobia, racism and other forms of discrimination are taking place. He mentioned the examples of the USA and Turkey, and asked the question "what does participatory democracy have to say about those whose doors are being closed in the world?", in the face of which his prognosis is not optimistic.

The fake news that are generating fear among citizens and that represent strategies of the right wing to counteract democracies and support neo-fascist regimes, in his view.

He concluded by saying that when talking about the right to the city, one must question whether the concept itself does not become exclusive; to this end, he invites us to reflect, to look at ourselves and see how participatory democracy is emerging in the world.

The moderator, John Ackerman, introduces two topics for discussion at the table: firstly, the questioning of the concept of democracy and of a concept that seeks to go further in a supposed crisis of democracy: people's power. He asks the question "why don't we move from democracy to people's power?" The second theme deals with public services in cities, given that one of the pressures of neoliberalism is mass privatisation (Chile, Brazil). The question is to what extent public services should be public and free.

On these issues, Anacláudia Rossbach said she did not agree that in cases such as the protests in Chile and Brazil, these protests should be related to services such as public transport, because, she said, it is the segregation of social housing on the outskirts of cities that causes these demonstrations. This framework has not been changed in Latin America, the most unequal continent on the planet. She pointed out that spaces like this congress are very good for dealing with the issue in depth and understanding the roots of things. The speaker also said that one of the most important legacies of this democratic emergence in Latin America is the social movements, mentioning the feminist movement which has never been so widespread and popular. Her intervention highlighted that today we have a combination of the popular movements of the most traditional organizations (1980s and 1990s) and the new collectives, which is a very important foundation for the transition to democratic cities. She concluded by referring to the principle of co-responsibility, which means that the responsibility for change does not lie solely with the mayors, but with everyone as a society.

The Mayor of Valongo expressed that popular power is a question of liquid democracy, because many people do not want to participate, and that is where effective representation comes into play, which must be understood as necessary. He stressed that when the rule of law works well and the law is the same for everyone, everything else works. The problem, he said, is when this does not happen, so there must be representation and participation. On the issue of public services, he said that transparency is fundamental, and mentioned as an example that in Portugal and in many places in Europe there is a law on essential public services that guarantees access to and quality of these services, because public services and their transparency must represent investment priorities

Mayor Esperance Mwamikazi focused on the growing inequality in the Congo linked to the lack of communication and transparency in local government. She said that in the Congo there is a lot of wealth but many communities are in misery. There is inequality and frustration because there are very few resources in the community. Representation fails because it is not communicating and the community cannot access information.

Jai Sen agreed with Anacláudia that wonderful things are also happening. He was pleased to see himself at the conference surrounded by people struggling to deepen the experience of democracy, and said it was important to focus on the world around us and all those people who migrate in the world through dispossession. He stressed the fragility of the governance of what he referred to as undemocratic political leaders in the US or the European Union, which, in his opinion, are on the verge of internal collapse. Finally, he expressed his wish that all these concerns should have a place in the conference.