Keynote address. The desired plot and the projected denouement. Societies and cities in co-construction. Local-global dialogue between the social and municipal agendas, Agenda 2030 and the NUA

The moderator began by pointing out that the session deals with the compatibility between global and municipal agendas, and proceeded to give the floor to the keynote speaker and the members of the panel. 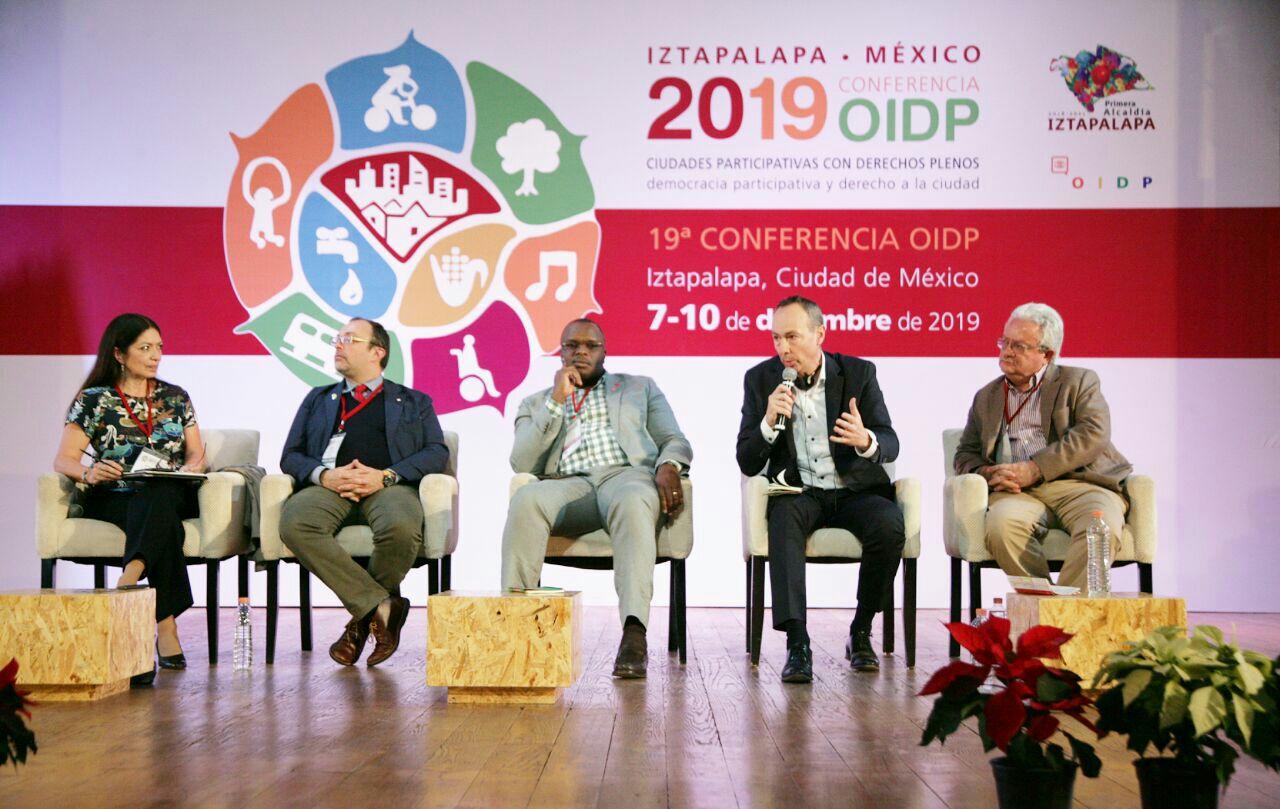 Intervention by Giovanni Allegretti, professor and researcher at the University of Coimbra, Portugal

The keynote speaker pointed out that his paper uses references that come from two large networks (Participedia and the IOPD), which have knowledge and wisdom about co-construction of cities. According to Allegretti, one of the most lively debates on participation began in 1963, when an issue of the journal Architectural Design was published in which John Turner wrote about the self-built popular colonies in Peru, which gave rise to a great debate: by valuing self-construction, one could somehow justify the neoliberal model of the minimal state.

Another issue that he pointed out should be evaluated today is the fact that there has been a reduction in the resources of local powers. He mentioned that Bologna brought together 200 Italian municipalities that work in shared administrations of common goods, supported by the Emilia-Romagna region and Tuscany, where local governments are building collaboration pacts with citizens' groups. In the case of Bologna, he highlighted that there are almost 500 active pacts for the management, not only of parks and public spaces, but also of unused but well-maintained buildings. Of these pacts, they provide for cooperation with organised society. The pacts reduce the costs of maintaining public services and equipment, and allow resources to be freed up for new investments.

As far as Tuscany is concerned, the centrality of common goods has been introduced in its regional constitution to provide a third way that has to do with collective welfare and forms of widespread participation. This introduction is being complemented by the construction of a law that allows for the creation of these partnership pacts with citizens at regional level.

He pointed out that the debates on the commons are only one way in which the right to the city is being discussed in Italy, although there are others: in Sicily, for example, a percentage of its transfers to the municipalities is dedicated by law to participatory budgets.

He referred to the fact that one of the basic elements that is important to remember when working from public authorities is the risk of introducing gatekeepers: moments, figures and technologies that block doors to citizen participation.

With regard to the Sustainable Development Goals, he indicated that there is a risk that because they want to put everything in, they end up not focusing on something really important, and therefore he invited people to think about instruments such as the Quito Declaration, which in point 13 talks about fulfilling the social and ecological function of the earth. The speaker pointed out that it is necessary to see the territory as an educational space and to value the idea of meeting face to face, because great constructions are always made by looking each other in the eye.

In his opinion, caravans or multiple voting forms are elements of fundamental architecture to prevent the nature of participatory processes from being more competitive than cooperative.

He pointed out three elements that he considered important to highlight:

He invited the audience to reflect with him on the following points:

He concluded by pointing out that we must not lose hope that there is complementarity between the institutions, citing the example of Nancy Pelosi, President of the United States Parliament at the COP 25 in Madrid, who showed that although there is a president who does not want to know about climate change, there is a parliament that wants to talk and represents thousands of citizens who want to talk. This is a struggle with different institutions with which we can work on the elements of participatory and representative democracy, and thus be able to strengthen our democracy. 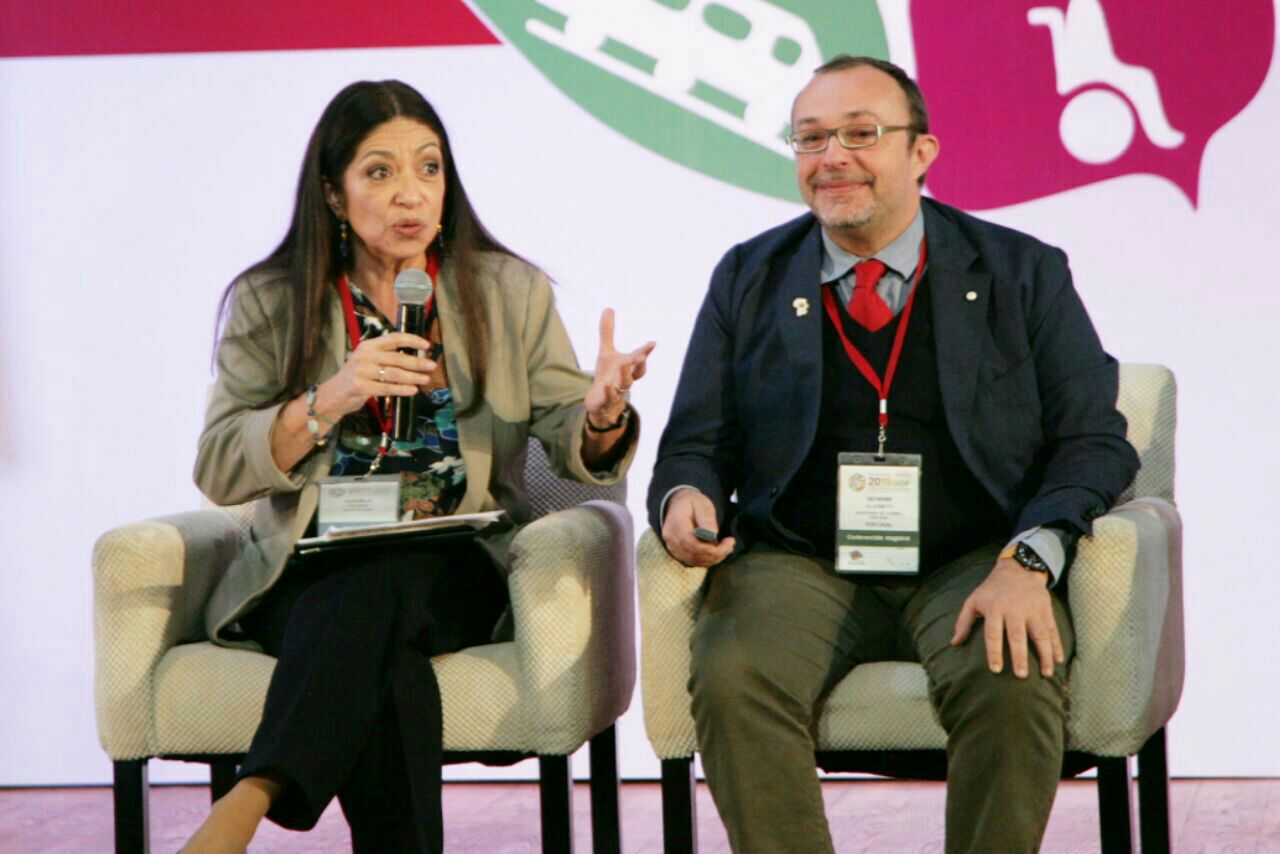 Calisto Moisés Cossa, Mayor of the City of Matola, Mozambique

His intervention made reference to the fact that a ruler who does not bring happiness to his citizens does not fulfil his objective, and he pointed out that happiness is generated when the conditions for wellbeing are provided: water, accessibility, sewage... He pointed out that the problems faced by citizens must be discussed, as one cannot promote an impossible one; the populations know the needs they have where they live, so it is necessary that all the planning that is done is linked to the needs of the population.

The panelist began by congratulating the IOPD and the Iztapalapa City Council for calling for this strategic and innovative reflection to rethink cities, which means rethinking society. He highlighted the fact that this important conference is being held from the east of the CDMX, precisely in Iztapalapa; he also called for the CDMX to recognise the eastern region as a space for innovation, creativity, creation, and social drive, and to stop seeing it as a zone of shortages and problems.

He highlighted that in this area of the city there are relevant social experiences, there has been social production of habitat and many initiatives have been generated that have allowed a profound transformation of the city, such as the fact that today the city has a constitution articulated around the right to the city, which is due to popular urban social movements and very particularly to what is now the Iztapalapa City Hall.

He pointed out that if we are talking about agenda building, we must recover what has already been done in the CDMX, which was born out of academic, political, social and legal processes, given that this city is an excellent example that a process of dialogue can take place (although not without problems). He reinforced the message of the need to articulate the neighbourhood and municipal agenda together with the other agendas.

He also mentioned that if a comparison is made between the content of the MDG agenda and the SDG, a substantive change is found, insofar as the SDGs include crucial issues such as the city and inequalities due to the growing global awareness of the crisis that is being faced. Another central element is to assume that the crisis is global, and to recognize a new type of development, which translates into the fact that in the 2030 agenda there are no countries without obligations (although with differentiated responsibilities). Furthermore, the participation dimension of the agenda 2030 is more intense.

He concluded by stating that participation channels are central to enriching the agendas and in this sense, substantive participation is required, not just voice and picture, but effective decision-making capacity.

The Deputy Mayor pointed out that the aim of participatory democracy in Grenoble is to emancipate people, and that the most difficult thing to change, more than our opinions, is behaviour. Even so, we have a collectively duty to change it.

He stressed the importance of giving citizens the power to decide, and pointed out that the power of citizens at the local level depends on the laws of each country and the level of organisation.

He concluded by mentioning that the issue of public deliberation on the 2030 agenda is how we will exchange, dialogue and discuss with the elements of nature.

The moderator invited the keynote speaker, Giovanni Allegretti, to close the session, who concluded by pointing out that the 2030 agenda is much more participatory in its construction and in its dimension of co-responsibility among the different actors. He highlighted the greater inclusion of citizens and the need to modify lifestyles in order to be sustainable. However, he pointed out that there is still a need to fight within the participatory processes so that attention is given to those who do not yet have a voice (nature and the new generations). Therefore, he urged to carry out so-called advocacy and to side with these dimensions and defend these actors.

Finally, Giovanni Allegretti highlighted the role of networks and mixed networks, with actors from different levels of state and society, as autonomous citizens acting at this time when representative democracy is in crisis. He mentioned that the difficulty of today's participatory processes is to keep together the dimensions of the individual who is not recognised in a collective and the collectives that are already organised, in order to build a stronger society and community, bringing together all these forces to build a seismic retrofit.